The Sri Lanka Air Force (SLAF) Museum in Ratmalana is one of the country’s lesser known museums. Established in 1993, it is also the only national museum dedicated to the aviation industry, and contains artefacts dating back to the Second World War. The idea for an air force museum was suggested by Air Chief Marshall Harry Goonetilleke, who was the fifth Commander of the SLAF. The exhibits are housed in four hangars, and has the largest collection of military artefacts in the country.

Tickets are priced at Rs. 100 for adults, and Rs. 25 for a child. Predictably, tickets for non-Sri Lankans are priced higher, at USD 10 per adult and USD 3 per child.

The museum was somewhat deserted when we dropped by, which gave us ample opportunity to wander quietly around. Here are a few photos from our visit. All the technical details we’ve included are off the exhibits’ captions. Originally from England, The Chipmunk T. MK 10s were the first aircrafts which entered service with the Ceylon Air Force (CyAF) in 1951. Stationed at the CyAF base in Katunayake, this was later nicknamed the No. 01 Flying Training School. This was the basic trainer for flight cadets and the Sri Lanka Air Force (SLAF) until the 1980s, when they were phased out of service in 1985. Of the remaining aircrafts, a few fully functional ones are maintained by the SLAF at the Air Force Museum. Aircraft recovery by means of trackjacks
This MIG aircraft was damaged due to an accidental retracting of its undercarriage whilst being parked. The way the trackjacks are laid out shows how it will be positioned when recovering aircrafts that had crashed. The Skytrain Douglas DC-3 is famed for being used as a cargo transporter over the notorious “Hump” of the Himalayas when the Japanese army closed the Burma Road, and for transporting paratroopers during various campaigns over Germany. Due to its impact on the airline industry and the Second World War, it is regarded as one of the most significant transport aircraft ever made; thus the old saying “The only replacement to a DC-3 is another DC-3”. A well pruned maze within the compound, which is sadly off limits to the public. If you’ve never been on a plane before, this flight simulator is a great place to experience what it is like. In this aircraft, you get to ‘fly’ like a passenger for ten minutes. Stepping into Hangar 01, you’ll see miniature flight models suspended mid-air. This particular one caught our eye because of its peacock-like appearance, reminiscent of Ravana’s flying chariot. In addition to the model flights, the hangar also features a range of uniforms used by Air Force personnel. This includes uniforms of those employed in administrative fields, as well as those of the pilots. With no light inside at all, this portion of the hangar felt extremely creepy. The only light inside was that reflected from elsewhere. The life-sized mannequins only contributed to the creepy atmosphere. MARTIN-BAKER Mk6 ZERO/ZERO EJECTION SEAT
Martin Baker is the number one manufacturer of emergency escape systems for fighter aircrafts. The ejection seat provides a greater survivability rate for the pilot, by making it very safe to eject themselves from an uncontrollable aircraft. Row upon row of photos in memory of veteran SLAF personnel hang on the walls. 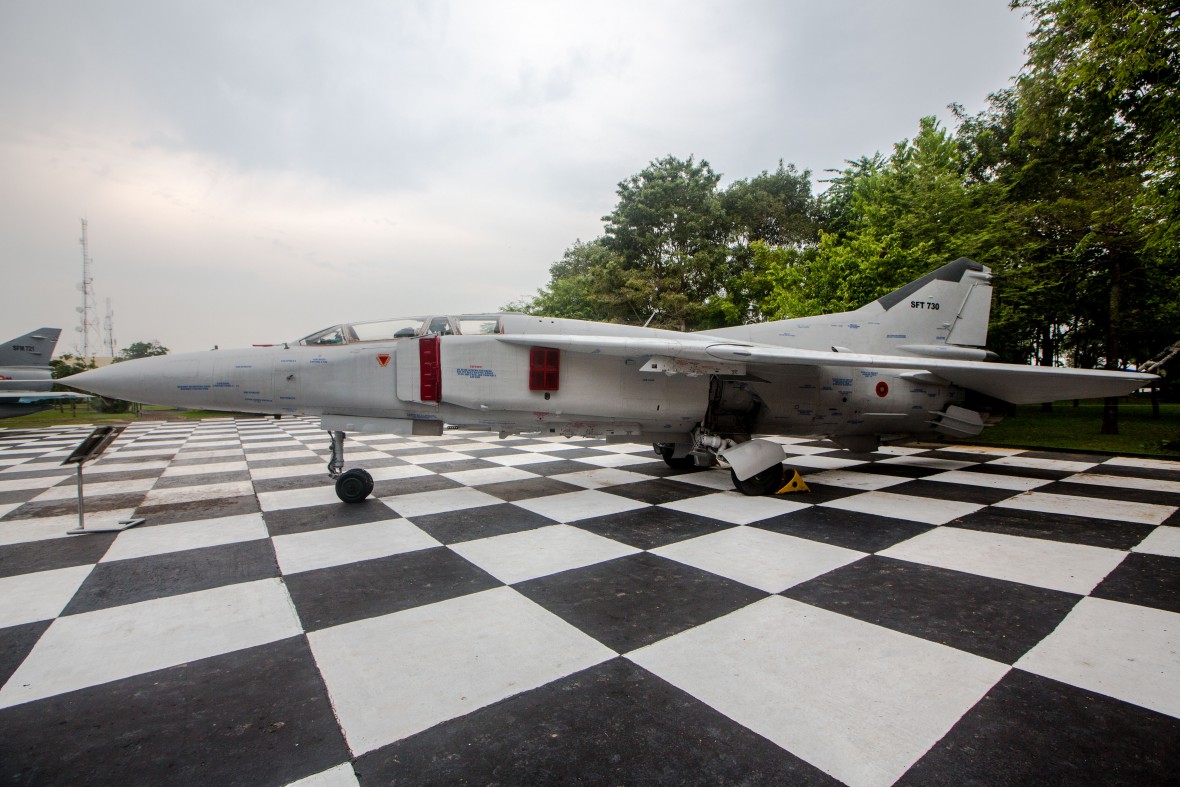 This is an MIG-23UB supersonic, strike fighter, bomber. The wings are swept forward (at a 16 degree angle) for bombing runs, and they can be swept backwards (at a 72 degree angle) for high speed return to base. It carries powerful bombing, gun, missile, rocket armament and modern sighting equipment.
Due to the low flying attack profile of these aircrafts the psychological damage caused to the enemy was as extensive as the physical damage inflicted on them.