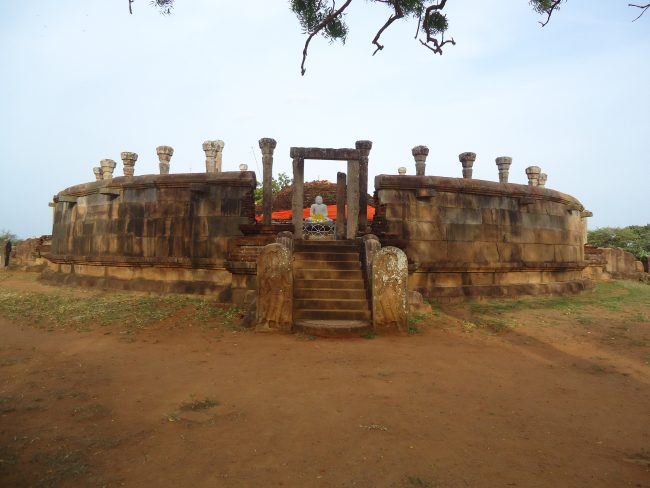 The shrine—which was believed to be built during the lifetime of Lord Buddha—is situated 45 km north of Trincomalee, along the Trincomalee–Pulmoddai road at Thiriyaya, in the Kuchchaveli Division.

The legend behind Girihandu Seya

According to Buddhist legend, this chaitya became a reality when two brothers called Thapassu and Bhalluka acquired the hair relic of Lord Buddha and brought it to Sri Lanka.

The two brothers were originally merchants in a village called Pushkarawathi in India. One day, while travelling with their goods, they encountered Lord Buddha—on the 50th day after he had attained enlightenment, as stated in the Theravada Buddhist chronicles. Thapassu and Bhalluka became the very first devotees of Lord Buddha in history, and they asked Lord Buddha for a relic so they could worship him. It was then that the hair relic was given to the brothers who placed it in a gold casket.

These two merchants had the habit of travelling to kingdoms to sell their goods, and they carried the hair relic with them to each place that they travelled to. They set sail for Sri Lanka with a large amount of cargo and anchored at place called Galwaraya, which is presently known as Kallarawa.

Afterwards they travelled towards the yang oya—which is in the region of present day Trincomalee—where they placed the golden casket on the top of a nearby hill, and covered it with a white cloth. As the story goes, they later discovered that they could not take the casket away from this place—it was mysteriously embedded in the rock it had been placed on. The brothers then decided to cover this casket with rocks, and before leaving back to India they constructed a small stupa to house this relic.

It is believed that the inscription was made in the 8th century A.D. and can be seen when visiting the chaitya. Image courtesy flickr.com

The Thiriyaya stone inscription, which can be found near the pathway leading to Girihandu Seya, states that the stupa was completed 75 days after the enlightenment of the Lord Buddha. It also states that it was King Girikandisiva and King Agbo VI who later on constructed the watadageya (circular shrine house) of Girihandu Seya, and the stone steps leading up to it.

The Thiriyaya stone inscription is inscribed on a flat area of rock about twenty feet in length. According to the Department of Archaeology, this inscription was made in the 8th century A.D. 1200 years after Thapassu and Bhalluka built the original stupa of Girihandu Seya.

The story of the origins of Girihandu Seya is inscribed on this stone in the Sanskrit Devanagara script. Archaeologists have stated that the inscription contains eleven stanzas of worship songs to Girihandu Seya.

The jungle has slowly claimed some of the remnants of this chaitya. Image courtesy tripadvisor.com

The ruins of Girihandu Seya and the Thiriyaya stone inscription were rediscovered by a group of surveyors in the year 1929; it was then given the name Neethupatpana, a Pali word meaning ‘rock visited by traders’. The archaeology department then renovated the chaitya, and its name was changed to Thiriyaya Girihandu Seya, and was renowned the world over as the world’s first shrine to Lord Buddha.

Today, most of the buildings in this sacred place are in ruin, and in certain places the jungle has slowly claimed the remnants of this chaitya. However, last November Prime Minister Ranil Wickremesinghe stated that funds would be provided to renovate Girihandu Seya, once again.

Hopefully, the renovations will take place soon, so that the chaitya will be restored and given a place of prominence among the many places of Buddhist religious and cultural heritage in Sri Lanka.