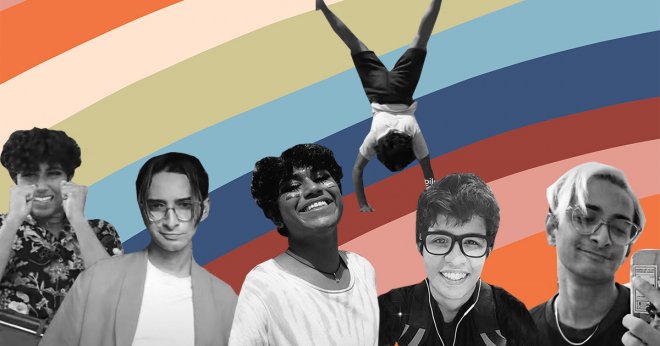 How LGBTQ+ Creators Are Changing TikTok In Sri Lanka

In a TikTok that has been viewed more than 143,000 times, Tharusha Mudalige (@tharusha_mudalige) lip-syncs along to a modified version of a popular audio clip. It is in response to a comment on one of his previous posts, that floats at the top of the screen: ‘Why are u wearing a girls t-shirt’.  Mudalige is all smiles, with a rainbow pride flag painted on one cheek and a transgender pride flag on the other, making sure his face catches the sun. He sings along to the audio, which declares, “You can do anything you want when you’re gay”. A majority of the 424 comments on the post are enthusiastically supportive, but one commenter feels compelled to warn Mudalige that he’s going to hell. Mudalige posts a crying-laughing emoji in response.

“It was kind of bad towards the beginning, because people weren’t used to seeing a guy being so openly feminine and queer, and I think it threw a lot of people for a loop, because I was getting death threats and rape threats, like, weekly,” Mudalige told Roar Media, his lighthearted tone downplaying the seriousness of the situation. “But now it’s gotten progressively better because I’ve built up a niche of people who know who I am.” This niche following consists of 11,200 people, with Mudalige’s videos amassing approximately 300,000 Likes since his first, posted in February 2020, of him and his mother dancing to Doja Cat’s Say So.

TikTok’s explosive global popularity in the past few years has been echoed in Sri Lanka, where it ranks number three on the Google Play Store and number six on the Apple App Store. Despite having a relatively small following in comparison to many of Sri Lanka’s most popular TikTokers, Mudalige is one of few content creators on the app who openly identify as part of the LGBTQ+ community, with a decidedly mainstream follower base. And while the majority of his TikToks go beyond discussions of sexual identity and gender roles, his content is collectively derived from his identity in the same way that anybody’s social media presence — influencer or otherwise — would be rooted in their lived experience. In this regard, Mudalige and a small handful of other LGBTQ+ creators stand out by having accumulated a generally mainstream audience base, something that hasn’t been easy for LGBTQ+ creators on other social media platforms.

‘TikTok can give you a false sense of security’

One of Ursula Bastiansz’s (@iamursulab) most popular TikToks is a skit that depicts her being interrupted by her mother (also played by Bastiansz) while in the middle of the viral ‘Wipe It Down’ challenge, in which the latter character expresses shock at the fact that the former is doing housework. With roughly 12,700 followers on the app, much of her content emulates global TikTok trends with a Sri Lankan twist. “I think it had to do a lot with the fact that I localised challenges,” she said of the popularity of her content. “And that’s how my audience became more mainstream — because it’s for everybody, everybody can understand it,” she explained.

“I also think a contributing factor towards the growth of my entire profile is that most people cannot figure out if I am a girl or a boy,” said Bastiansz. “People are having little debates in the comments section on what my gender is and I have never, not once, commented or acknowledged that sort of comment. I’m just sitting there on the sidelines, enjoying it. I’m just really going with the confusion,” she said.

“The way I dress and the way my hair is and a lot of my physical attributes have kind of pulled me out of the closet, so to speak,” she explained. “If people say anything negative, I block them like that,” she said, snapping her fingers. “I used to be the person who would argue with anyone and everyone online, but then I figured that some people are just not worth that effort.” In this sense, it is easier to deal with her visibility online than it is offline. “In real life, I still cringe a little when I have to walk past a boys’ school in Sri Lanka,” Bastiansz said. “Because almost always, they do that, ‘Ah, kellek de kollek de?’, and that just makes me feel really uncomfortable. That is a form of homophobia, right? Like, why do you care?”

Meanwhile, Mudalige is aware that the largely positive reception to his content online may not necessarily translate in his day-to-day life. “I have to draw a line between what I can and can’t do in real life, because [TikTok] can give you a false sense of security,” he said. “When I’m safely in my room, I’m wearing whatever I want to wear because I’m not in imminent physical danger. It makes me feel better that I can do it on social media, but I would never go out like that and expose myself in that way,” he said.

‘It opens people up in an unbiased way’

“The nature of TikTok is that it’s built to be a hyper-exposure-driven app. We consume content, we accept it, we understand it, we move on. And that happens in a matter of seconds,” said Aasif Faiz (@misteraasiff). The humour in Faiz’s TikToks alternate between lovingly mocking contemporary Sri Lankan-isms and tongue-in-cheek self-deprecation. A recent video depicts Sri Lankan parents coming to terms with their child’s new girlfriend before and after seeing an astrologer, captioned ‘From me magula karanna ba to kawadada me magula karanne’. In an older one, viewed more than 64,000 times, he responds to a user asking others to “Tell me you’ve never touched a woman without telling me you’ve never touched a woman” by simply staring into the camera in silence, interrupted by the distinct sound of a notification from Grindr, a dating app for gay, bisexual, trans and queer people.

Unlike Facebook or Instagram, where the comments on any given post are shown alongside it, the comments section on TikTok has to be opened separately. “You’re not reading someone else’s comment before you see the video, so it’s like your exposure to the content is purely your own, and this allows more honest responses and learning,” said Faiz. For creators like him, whose content spans the various intersections of his identity — Sri Lankan, bisexual, millenial — this is a clear advantage. “Anyone who stumbles onto [my account] will relate to either one of these things or all of them. It opens people up in an unbiased way to look at how much we have in common — you see similarities, see familiarities, and that bridges a lot of gaps. And I think that is also a step towards acceptance, in a way.”

But that visibility also has its drawbacks: “Being open to a mainstream audience, you’re also opening yourself up to a lot of hate via internet trolls or bigots,” Faiz pointed out. Mudalige agrees: “Yes, if [I had] just a queer audience, it would be so much easier, because I wouldn’t have to prove my worth to these people. But with a more mainstream audience, you get a chance to show them who you are. Everyone’s like, ‘You shouldn’t give a s*** about what straight people think!’, but at the end of the day, they’re the ones running our country. They’re the ones who are going to make legislation that is going to make it okay for us to live in this country. And you have to be able to get them on your side.”

‘Our battles are not the same’

It is important, however, to acknowledge the lack of local transgender creators on TikTok. Trans people in Sri Lanka routinely face discrimination and abuse from both law enforcement officials and wider society. The unchecked exposure that comes with a public online presence poses certain risks to trans people that other queer people may not experience. As with lived experiences offline, privilege plays a major role online. “I’m a 26-year-old, middle-class person from a Muslim background living in Colombo, so what I go through is definitely not the same as what the next person goes through,” said Faiz. “I can’t speak for the entire LGBTQI+ community — we share something in common, but our battles are not the same,” he said.

“The most important thing is safety, and a lot of people forget that,” said Mudalige. Pressure to come out and openly acknowledge your sexuality or gender identity is particularly strong during Pride Month, a sentiment that, while well-meaning, could be potentially dangerous. “If you are still dependent on your family, if you don’t have a source of income, don’t have a place to stay, and you come out and you don’t get the reaction that you’re looking for, you might stand a chance of being kicked out, and then you have nothing,” said Bastiansz. “As sad as it is that you have to stay in the closet until you’re stable, it makes better sense to gain that stability before you take such a risk — especially in a country where it is still a risk.”

For those who feel secure enough to be open about their identities online, there is no underestimating its impact — no matter how miniscule — offline. “I see young, queer kids who are able to express themselves on this platform in ways we couldn’t even think about at our age,” said Faiz. And in addition to empowering people to openly be themselves and feel confident in their identity and appearance, the visibility of LGBTQ+ people on social and mass media ultimately contribute towards making the world a less hostile, safer place for LGBTQ+ individuals and communities. “The more people are exposed to us, the more they see that we’re just normal people, the more they’ll not make it such a big deal,” said Bastiansz.