Sri Lanka’s first ‘recorded’ love story is that of Vijaya and Kuveni—the former who is also recognised as the island’s first king. We say ‘recorded’, because the only source we have to draw information from is the Mahavamsa, a highly romanticised Pali epic chronicling the history of ancient Sri Lankan dynasties, interspersed with myths, legends, and fantastical elements.

It is almost impossible to know which bits are fictional, but they make for interesting stories nonetheless. With that in mind, here are a few stories of romance which are as good as folklore. From making their way to school textbooks to having a whole town named after one of the protagonists, these stories (whether they be true or not) make up part of our historical anecdotes. 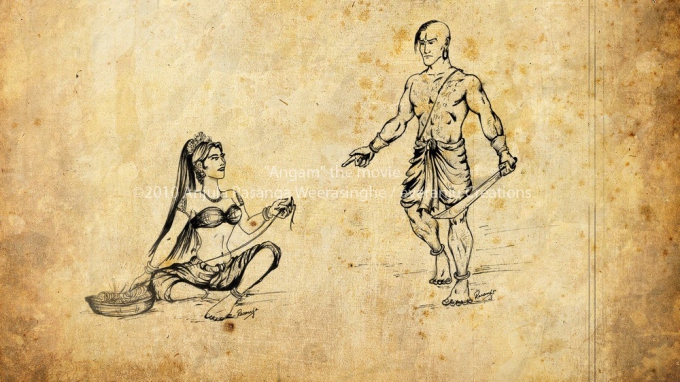 We all know how the exiled Indian princeling Vijaya landed in Sri Lanka and stumbled upon Kuveni, a Yaksha tribal woman, spinning thread. According to stories, Kuveni managed to imprison Vijaya’s men one by one, and when Vijaya found out what happened, he threatened to kill her and demanded their release. Conceding to his demands, she released the men and also helped Vijaya overthrow the leading Yakka tribe and become king. She served as his queen consort and bore him two children—but only until he married an Indian of the high Kshatriya caste to legitimise his rule. Princess Unmada Chithra was the daughter of the second monarch of Sri Lanka, King Panduvasdeva. History romantically paints her as an extremely beautiful maiden for whom, instead of love at first sight, young men go mad with desire instead. Her name in itself loosely translates to a picture which drives one mad (unmada or to be insane; chithra a drawing).

The eleventh child of King Panduvasdeva and Queen Baddakachchana, Unmada Chithra was also the only girl. Unfortunately for her at the time of her birth, royal astrologers predicted that her future son would kill all her brothers and claim sovereignty—so to prevent such a catastrophe from happening, her brothers imprisoned her in a tower away from the male gaze.

Stories of her beauty spread far and wide, making a young prince by the name of Deega Gamini determined to see her. He managed to build a ladder and scale the tower in secret every night, despite the danger of crossing her ten brothers.

She eventually became pregnant, and her brothers agreed to let her keep the child if it was a girl, and kill it if it was a boy. She conceded to their wishes, but also conspired with one of her maidens to swap her newborn with a baby girl from the village if she gave birth to a boy (which she did). True to the prophecy, her son discovered his true identity when he was a young man, and eventually overthrew his uncles and became the king we now know as Pandukhabaya. The story of Saliya and Asokamala is retold with the barest of details, and is presented as a simple love story. It is said that the prince, who was the only son of King Dutugemunu, was taking a walk one day when he heard someone singing in a grove of trees. He stumbled upon a lower-caste girl plucking flowers, and fell in love with her. The Mahavamsa assumes that they were husband and wife in one of their previous lives as well, hence the strong bond between the both of them. Being the crown prince, Saliya was warned that he would lose rights to the throne if he married her instead of royalty, and he chose to forego his title and marry her instead.

It is widely believed that the ancient rock carving known as the Isurumuniya Lovers in Anuradhapura is a representation of these two individuals. The gypsy dancer now has a whole suburb (and the governor’s residence turned hotel) named after her. Image courtesy: news.mountlaviniahotel.com

Perhaps the most romanticised of all is this relationship between the British governor and a gypsy dancer. Maitland built a beachfront mansion for himself, in a predominantly Sinhalese village. A dance troupe from the village was frequently hired to perform for him and his guests—which is when he first saw Lovinia Aponsu.

The dancer was of mixed race—it’s believed that her mother was Sinhalese and her father Portuguese. Legend also has it that the governor was so smitten by her that he had a tunnel secretly built, which lead from his mansion to a disused well near her house, in order for her to visit him without causing scandal.

Maitland served as a governor until 1812, where after he left the country. It is believed that the tunnel was sealed off in 1920, and that Galkissa was also named Mt. Lavinia in the dancer’s honour.

It is also widely believed that it is Lovinia who ‘won’ the right for women of her caste to wear an upper garment—low-caste Sinhala women were bare-breasted in days of yore.