The Portuguese arrived in Ceylon, or Ceilão, as they called it, by chance. In 1505, a fleet commanded by Lourenço de Almeida—the son of Francisco de Almeida, the first viceroy of Portuguese India—was blown into Galle by adverse winds. It was thirteen years later, in 1518, that the Portuguese established formal contact with the Kingdom of Kotte, ruled by Vira Parakrama Bahu, and were permitted to build a fort in Colombo.

Although the Portuguese were primarily interested in exploring trade and commercial opportunities in Sri Lanka, an opening for greater exploitation presented itself in the form of seven warring kingdoms within the island. With time, the kingdom of Kotte began to depend heavily on the Portuguese for defense against the other kingdoms, leading to an  enhanced role for the Portuguese in Sri Lankan affairs.

An agreement in 1543 between King Buvenaka Bahu of the kingdom of Kotte and the Portuguese resulted in his grandson Prince Dharmapala being educated in the Franciscan order of the Roman Catholic Church. The conversion of Dharmapala heralded sweeping changes in Sri Lanka’s social landscape, as the Portuguese embarked on a mission to convert the local populace.

Sri Lankans in the western coastal areas were particularly susceptible to the changes, with conversions occurring en masse,  but conversions occurred interior and in the northernmost parts of the island as well. As Portuguese culture permeated the island, Sri Lankan Tamils and Sinhalese took on many Portuguese names as their own, suffixed to their personal names. 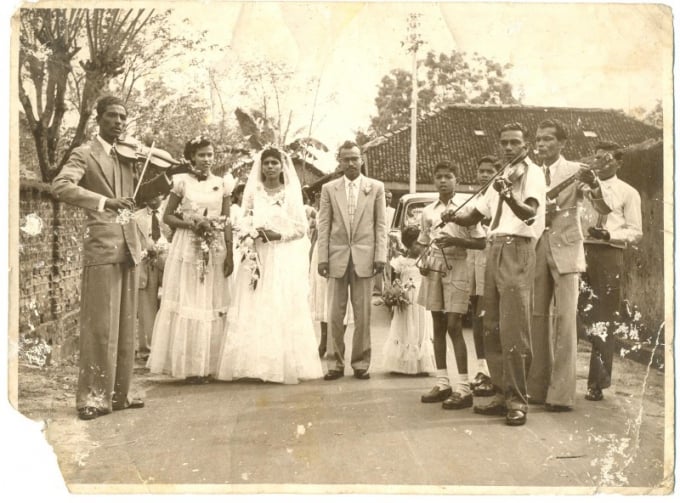 Here are a list of some of the more popular Portuguese-Sri Lankan surnames and what they mean:

The surname ‘Silva’, and its derivative ‘de Silva’, meaning ‘from Silva’ or ‘of Silva’ is a popular Portuguese surname and means ‘forest’ or ‘woodland’. It is a wide-spread surname in Portuguese-speaking countries as well as regions formerly under the control of the Portuguese empire (like Sri Lanka, India, America, and Africa.) ‘Silva’ and ‘de Silva’ are very common surnames in Sri Lanka, but doesn’t necessarily mean the holder is of Portuguese descent—just that the holders ancestors subscribed to the cultural hegemony perpetuated by the Portuguese.

The surname ‘Fernando’, although perpetuated in Sri Lanka by the Portuguese, is the old Spanish form of a Germanic name meaning ‘adventurous’ or ‘bold journey’. It is made up of the elements ‘fardi’, meaning ‘journey’, and ‘nand’ meaning ‘daring and brave’. In addition to being a popular name in Portugal, the name is common in Western India which was colonised by the Portuguese, and of course in Sri Lanka, where it is one of three most popular (the others being ‘de Silva’ and ‘Perera’) surnames taken on by Sinhalese.

The surname ‘Perera’, and its variant ‘Pereira’ is derived from the Portuguese surname ‘Pereira’, meaning ‘pear tree’. Perera is a very common surname in Sri Lanka, taken on by Sinhalese converts to Roman Catholicism with the advancement of Portuguese rule in Sri Lanka. ‘Perera’ is also a Spanish name with a number of variants (Perer, Perero, Pereros, Pereyra, Pereyras, Das Pereiras, Paraira)  in the Iberian peninsula.

‘Almeida’ and its variant ‘de Almeida’, meaning ‘of’ or ‘from’ Almeida is a Portuguese surname derived from the town of Almeida (in the Beira Alta province) in Portugal. Portuguese explorer Lourenço de Almeida who ‘discovered’ Sri Lanka, was the first of his kind to arrive in the island. In the subsequent decades, with the expansion of Portuguese powers in Sri Lanka, the surname ‘Almeida’ took on prominence with many Sinhalese and Tamil families taking on the name.

‘Costa’ and its variant ‘de Costa’ meaning ‘from’ or ‘of’ Costa is a Portuguese surname derived from the Latin word ‘Costa’ which means ‘rib’. With time, the surname came to mean ‘side’, ‘slope’, or ‘coast’ denoting the holder was from the coastal area. The surname ‘Costa’ and ‘de Costa’ are also Italian and Spanish surnames. In Sri Lanka, the surname was adopted by many Sinhalese and Tamil families, with the adoption of Portuguese mores in Sri Lanka.

The surname ‘Fonseka’ is derived from the Portuguese surname ‘Fonseca’, which comes from the Latin ‘fōns siccus’, meaning ‘dry well’. It refers to a spring that has dried up during the hot summer months and is today a well-known Sinhalese surname in Sri Lanka.

The surname ‘Correa’ or ‘Corea’ is a derivative of the Portuguese word ‘correia’ meaning ‘leather strap’. The surname is of occupational origin, meaning the holder was originally a maker or seller of leather straps (or belts). The surname is popular in Portugal and in Spain and is adopted by Sri Lankan Tamil and Sinhalese families for further advancement under Portuguese rule.

The surname ‘Tissera’ is derived from the Portuguese surname ‘Teixeira’  which refers to a ‘texio’ or ‘yew tree’. Variants ‘Texeira’ and ‘Técher’ are also common in Portugal. Although less common than the ‘Perera’, ‘de Silva’, and ‘Fernando’, ‘Tissera’ is today a well-known surname in Sri Lanka.

The surname ‘Cabral’ and its variant ‘Cabraal’ are Portuguese and Galician surnames that are derived from the Latin word ‘capra’ meaning ‘goat’ or  ‘capralis’ which means ‘place of goats’. The surname is an occupational one, meaning the holder was engaged in work relating to the care of goats, possibly a goatherd. In Sri Lanka, the surname is has been adopted mainly by Sinhalese families.

The surname ‘Thabrew’ and its variant ‘de Abrew’ meaning ‘from Abrew’ or ‘of Abrew’ is a derivative of the Portuguese name ‘Abreu’. The origins of the name is debated; some argue that it is a reference to the phrase ‘Abraham the Hebrew’, while others claims it refers to a ancient branch of the House of Normandy.

There are countless other Sri Lankan names of Portuguese origin, like Peiris, Nonis, Gomes, Suwaris, Mendis,  Sigera, Pigera, and others. In addition to these surnames, Sri Lanka assimilated many of the Portuguese names for everyday items such as ‘kalisama’ (trousers), ‘kamisaya’ (shirt), ‘almariya’ (wardrobe), ‘bonikka’ (doll), ‘bottama’ (button) and so many more. In parts of the island, especially the north, a Portuguese creole is spoken by a small population of those of Portuguese descent. It is clear that the 153 years the Portuguese spent in Sri Lanka affected the cultural composition of the country, even to this date.

Cover: The Portuguese manner of dressing was adopted by the Ceylonese. Image courtesy sundaytimes.lk