Hidden in midst of a jungle in the western section of Trincomalee, is the oil tank farm which was initially built by the British during WW2. The main purpose of the oil tank farm was to fuel the Royal Navy and the Royal Air Force (RAF), which were used during the East Indian defense against the Japanese aggression. After Singapore was captured by the Japanese, Trincomalee became the main refueling base in the region.

During a visit in 2015, Indian Prime Minister Narendra Modi also spoke about the tanks, highlighting that developing the tank farm “would help the coastal town become a regional petroleum hub”. 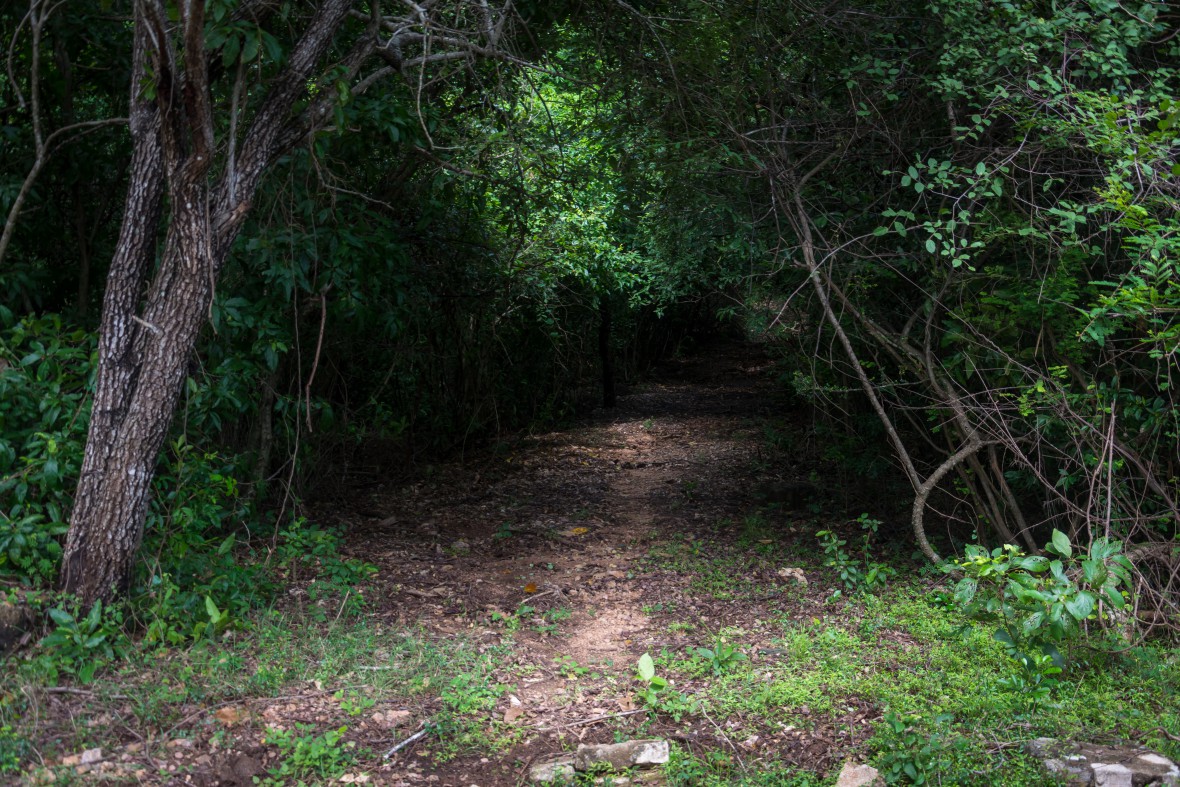 Everything is so wild and lush that the farm looks a bit like a forest.

Within an area of 850 acres, 101 tanks were constructed. Following independence, the tanks fell into disuse. The land has since been overtaken by trees and wildlife, with a high density of pythons reported from this area.

The initial construction of the oil tanks commenced in 1924 and ended in 1930. The metal used for the tanks consists of layered steel which is an inch thick, while the tanks near the harbor are a foot thick, and are made of concrete.

Once completed, each tank had the capacity to store 12,000 tons of fuel. Collectively, all tanks were able to hold up to 1.2 million tons of fuel. Currently, only 15 tanks are active and are owned by the Lanka IOC. In a recent development, the ownership was given entirely to the IOC. Permission is needed from the Lanka IOC to enter and visit these tanks.

Since their construction, two of the tanks were destroyed by aircraft. One was purposefully targeted by a Japanese plane while the other was destroyed when an RAF plane accidentally crashed into the area in 1960. Tanks hidden in the undergrowth enroute to Tank 91. This is just one of many.

Tank 91 was destroyed by the Japanese during the attack on the Trincomalee harbor on 9 April, 1942. During this attack, Tank 91, which was the furthest from all the tanks, was filled with fuel. This tank also had additional protective barriers placed barriers around it. An aircraft piloted by Shigenori Watanabe, Tuyagoto, and Sutomu Toshira was crashed into Tank 91 deliberately as part of a bid to cripple Allied Forces who relied on the fuel. The fire caused by this suicide attack lasted for seven days, and by the end of it, the manner in which the metal of the tank melted and twisted can still be seen to this day. The surrounding area is still visibly burnt, and the ground contains black ash sediments. The remains of the crashed aircraft engine can be seen at the Airforce Museum in Colombo. The area surrounding Tank 91 remains untouched and natural growth has since taken over. Within the tank, a pool of water can be seen with algae growing. A staircase had been constructed recently to view the inner tank. On the way to Tank 91, many other tanks can be seen hidden inside the growth. The area has been overtaken by forest. Old roads and pathways are now covered in green. An oil pump house which presently lies in ruins. View from afar of Tank 91 The remains of this rusty and decrepit tank are partially submerged in water and algae.