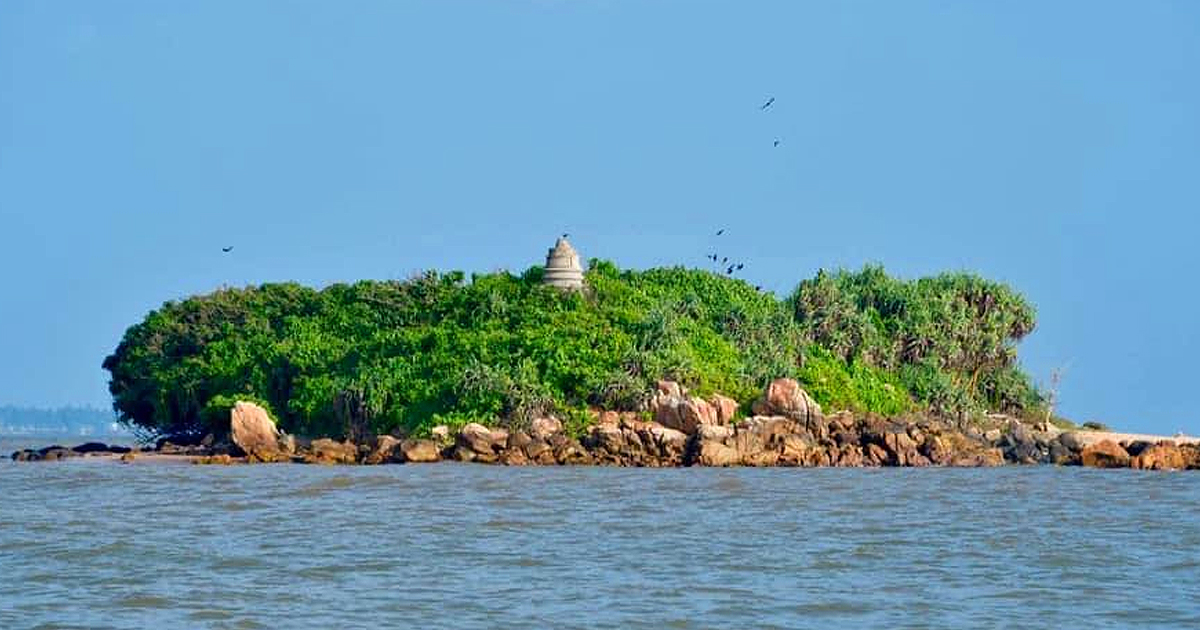 Off the coast of Matara in the South of Sri Lanka, across the Polhena beach, is the little Galgodiyana island on which remains the ruins of a stupa — but one that differs in style from other Buddhist structures of ancient Sri Lanka.

Few remember that the island — now a popular snorkelling location — was actually once home to a Thai prince who, after being falsely accused of plotting to overthrow the monarch at home, sought new life as a monk in Ceylon.

The Galgodiyana island, prior to the arrival of Prince Prisdang Chumsai at the dawn of the 20th century, was reportedly used by villagers on the coast to bury their dead and release poisonous snakes.

It was also not an island at the time, but a part of the Matara shoreline. Historical records say that erosion eventually led it to become an island, uninhabited until the year 1900.

It reportedly received its name in 1766, from a traveller named Van Doser.

Born on February 23, 1851, Prince Prisdang Chumsai was the grandson of Thailand’s King Nangklao. He was also related to King Ram IV and King Ram V, also known as King Chulalongkorn.

As a member of the royal family, the prince was given the opportunity to study abroad and received his primary education in Singapore, before leaving in 1871 for Great Britain, where he enrolled at King’s College, London to study engineering.  In 1876 he graduated with top results becoming the first Siamese person to receive a degree from a European university.

Prince Prisdang founded the first permanent Siamese embassy in England in 1881, and within the next five years, was able to establish diplomatic relations with eleven European nations and the United States, serving as Thai Ambassador to those countries.

It was the prince’s goal to further the development of his country through the diplomatic relations he had made with foreign nations, and so in 1855, he amended the agreements reached with the British government and established postal and telecommunications services in Thailand. He also ensured Thailand gained membership in the Universal Postal Union.

Arrival In Sri Lanka And Ordination As A Monk

According to the biography Bones Around My Neck by Tamara Loos, while serving as a diplomat in Paris, Prince Prisdang presented a new draft constitution and resolution aimed at preserving Thailand’s independent political power. This was in the year 1885.

The prince’s first visit to Sri Lanka took place in 1886, while he was still engaged in a career of diplomacy. While on his way from Thailand to Great Britain that year, the prince decided to make a stopover at Sri Lanka, to meet and express his admiration for the Ven. Migettuwatte Gunananda Thera, one of the pioneers of the Buddhist revival movement in Sri Lanka.

That same year, King Chulalongkorn resigned and Prince Prisdang returned to Thailand, to become the Director-General of the country’s Department of Posts and Telecommunications.

In 1890, while carrying out his duties diligently for his new posting, the prince was unfortunately falsely accused of plotting to overthrow the king. Rejecting these accusations, the prince left for India. After six years there, he returned to Sri Lanka, in the hopes of becoming a monk.

Prince Prisdang then became a student of Waskaduwa Sri Subuthi Maha Nahimi, who was at the time the chief incumbent of the Amarapura Siri Saddhammawansa Maha Nikaya. In 1896, the prince was ordained under the name Jinawarawansa, but was better known by many locals as “Siam kumara hamuduruwo”, or “The Siamese Prince-Monk.”

In the hopes of pursuing a life of seclusion, Prince Prisdang arrived on Galgodiyana island in 1900 and used the island for some time to practice vipassana meditation, before the villagers gifted the island to the prince.

To pay his respects to King Chulalongkorn of Thailand, the prince — now known as inawarawansa Thera, named this island “Chula Lanka” and also built a dagoba incorporating the Siamese style of architecture. Villagers who reside in this area at present say that he also built a road leading to the mainland. Most of this road has been washed away by the sea, but some parts of it are still visible.

From 1905 to 1906, Jinawarawansa Thera shared the island with Gnanatiloka Thera, a German national who came to Sri Lanka to be ordained as a bhikkhu. He later became a world-renowned monk and established the Dodanduwa Polgasduwa monastery.

Historical records also reveal that Franz Burgundal, the son of a wealthy Dutch merchant, and Fritz Stang, another German national, visited Jinawarawansa Thera to be ordained as bhikkhus. Burgundal was ordained as “Sungnga” and Fritz as “Sumana”. According to the biography of Gnanatiloka Thera, the two were given a grand ordination ceremony.

In 1911, Jinawarawansa Thera took up the post of chief incumbent of the Deepaduttharamaya in Kotahena. In 1911, Gnanatiloka Thera ordained a European national named Ludwig Stogg as “Vappa”, who later lived on the island as a permanent bhikkhu. But during the First World War, he was arrested for allegedly providing war intelligence to the Germans. The island was unfortunately besieged, eventually becoming depopulated.

It was during that same year that Jinawarawansa Thera returned to Thailand, to attend the funeral of King Chulalongkorn. He was then forced to rejoin the Thai royal family. Historical sources say the then King of Thailand prevented Jinawarawansa Thera from returning to Sri Lanka. The prince died on March 16, 1935, in Bangkok.

The remains of the stupa built on the island, and other archaeological monuments were severely damaged during the 2004 Indian Ocean tsunami. As a result of this disaster, time and neglect, the Siamese dagoba on the island is no longer in a good state.

For those who know of its history, the island stands as a good example of diplomatic, religious, cultural and political ties between Sri Lanka and Thailand. Efforts to protect and preserve the site, therefore, would serve the dual purpose of safeguarding a place of archaeological value, and paying homage to the history of the island, and the story of the prince who chose this as his place of exile and seclusion.