The Beira Lake and its colonial history

The man-made lakes—or tanks—constructed in Sri Lanka were built with one purpose in mind: to hold the rainwater which would help with agricultural activities throughout the year.

There are several stories related to the history of such tanks, many of which were made by the kings. The Beira Lake, however, located in the city of Colombo, was built for a completely different reason—and not by one of our ancient kings either.

The construction of the lake took place all the way back in the year 1521 by the Portuguese. Its main purpose was to act as a protective barrier against invaders, and to also serve as a means of transporting weapons and soldiers in the event of invasion or conflict of any sort.

How the Beira Lake came to be

Some historians believe that the name Beira is a derivative of the name De Beer – a Dutch engineer who built the moats and water defences of the Colombo Fort in the early 18th century. Image courtesy exploresrilanka.lk

The Portuguese settlers gained control over the administration of Colombo in the year 1518, after which they built the fort in Colombo. As time went on, assaults on the fort by the people of the Kandyan kingdom became more frequent. The Portuguese colonists realised that they needed a suitable strategy to protect their fort from external invasions.

The fort was surrounded by the Colombo harbour on one side, and marshland in all other directions—the Portuguese decided to make use of this marshy area to protect the fort. At first they tried to cut a channel across the marshland, but the large size of the fort made it difficult to do so, and the construction work of this channel was not completed. During this time the Sinhalese leaders attacked the Portuguese once again, and a detachment of Portuguese soldiers under Captain Lopo de Brito had to defend the territory.

It is said that after the Portuguese had brought an end to this conflict, they discovered that a large amount of water had begun to flow through the area of land that lay between the Dematagoda hill and the Saint Sebastian hill. The Portuguese leaders decided to utilise this new channel of water and annexed it to the channel that they had not been able to complete, thus creating a completely new body of water.

The Beira Lake during the Dutch era 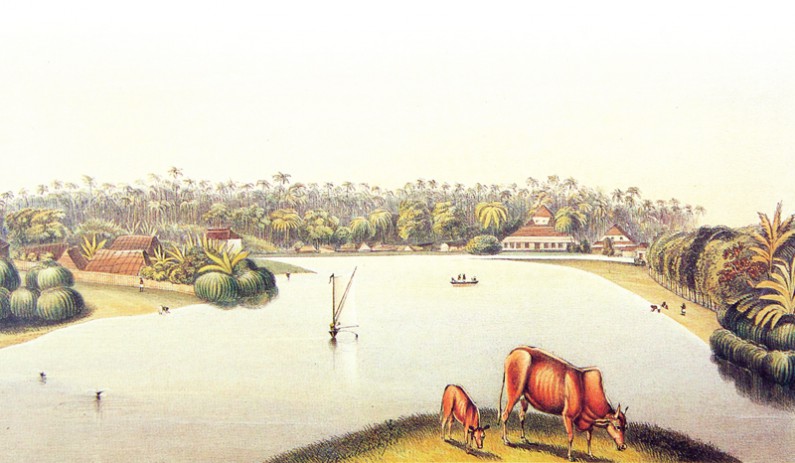 The Dutch expanded the Beira Lake after they took over the Colombo Fort. exploresrilanka.lk

The most famous of these islands was Slave Island—the place where the Dutch kept their kaffir slaves. The area between the Fort and Maradana Railway stations, known as Captain’s Garden, was also once an island that was surrounded by the waters of the Beira Lake. Devotees travelled by boat to worship at the kovil which stands even today. It is said that during the Dutch era there was once an island on the lake which was large enough to grow 600 coconut trees.

The Beira Lake and the British During the British era, the purpose of the Beira lake was more aesthetic than defensive. Image courtesy exploresrilanka.lk

When the British took control of the Maritime regions of the country, they inherited the Colombo Fort and the Beira Lake as well. The purpose of the Beira Lake at that time was mainly aesthetic.

John Deschamps—a soldier in the British artillery—describes the beauty of the lake during this era, in the Scenery and Reminiscences of Ceylon:“The lake forms one of the greatest attractions of Colombo, and by its margin stand some of the most delightful residencies in the Island; whilst its waters afford the favourite and healthful recreation of boating to the officers of the garrison and other European inhabitants. An annual regatta has been established, and on these occasions the lake puts on a gay and animated appearance. Nearly all the crafts are dressed in bunting and at night illuminated using coloured lanterns.”

The lake was  a venue for festivities too. Christmas celebrations, New Year celebrations and theatre performances took place here. The biggest celebration that was held here during the British era was the celebration of Napoleon’s historic defeat in the year 1815 (link in Sinhalese).

The renowned photographer Henry Cave too mentions the Beira Lake in his text Ceylon Government Railway:

“One is constantly coming across pretty nooks and corners, each fresh view presenting a wealth of foliage luxuriant beyond description. Palms in great variety intermingle with the gorgeous mass of scarlet flamboyant blossoms, the lovely lemon-yellow lettuce tree, the graceful bamboo, the crimson blossoms of the hibiscus . . . the whole forming to the rippling water a border of universal beauty and unfailing interest.”

Unfortunately the desecration of the Beira Lake also began in the British colonial era. The main reason was the dumping of waste into the waters of the lake by the various industries which were set up in Colombo at the time (link in Sinhalese).

This state continues even today. Despite various clean up attempts, the lake is relatively neglected, its waters murky and polluted, with many people associating this once tranquil lake with the disagreeable odour that sometimes wafts through this area of Colombo. Upcoming projects like ‘The Beira Lake Intervention  Area Development Plan’, which will be conducted by the Ministry of Megapolis and Western Development and Urban Development Authority (UDA), will hopefully manage to restore the lake for future generations.