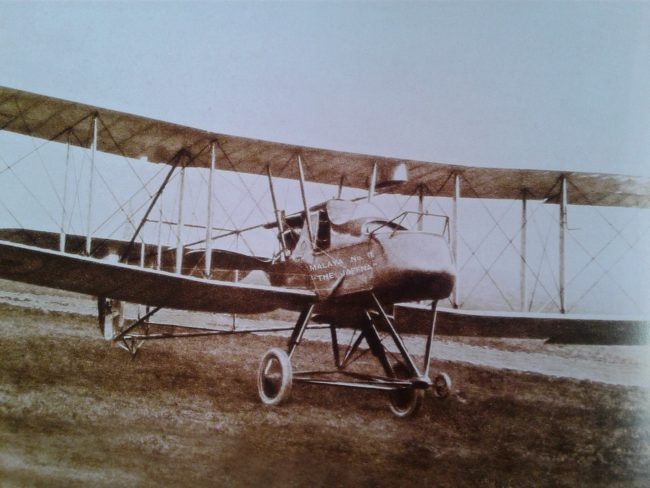 From the myths and legends of Ravana’s aircraft, the dandu monara, to the stories of the sarong-clad pilot, Paulis Appuhamy, and the cricketing pilot, Sunil Wettimuny, it is quite apparent that Sri Lanka has had quite an interesting run in terms of aviation.

The story about The Jaffna, a WWI fighter plane which took to the skies from British Malaya (present day Malaysia and Singapore) is one story out of many, that make up Sri Lanka’s aviation history.

The Jaffna takes to the skies

When the First World War began, aviation was still in its early stages. Aeroplanes were constructed from materials such as wood, fabric, and wires, and were powered by crude engines. However, these aircrafts proved quite beneficial in warfare, which led to the British and the German military equipping their armed forces with fighter aeroplanes.

Even though aeroplanes were advantageous on the battlefield, they were also quite fragile and vulnerable and were destroyed quite easily. Therefore, there was a high demand for new aircraft in order to replace the old ones.

As stated in Capt. Elmo Jayawardena’s A Centenary Sky: 100 years of Aviation in Sri Lanka:“All efforts of the international flying fraternity were channeled to finding ways to dominate the battle in the sky… The war itself became a major contributor to the expansion of aviation with its search for much faster planes flying higher and having the capability of greater manoeuvrability.” [1]

The book goes on to say that the British decided to send special requests to their colonies to sponsor the cost of aeroplanes, and therefore meet the high demand for aircraft in the war efforts. 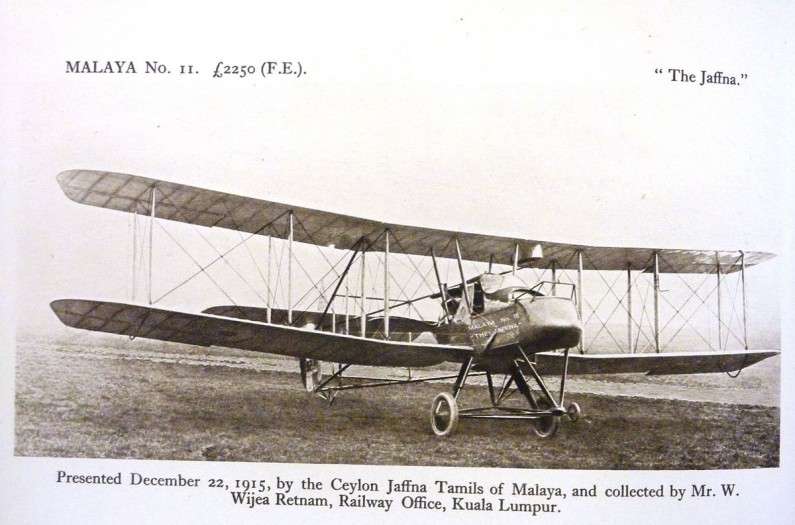 The Jaffna Tamil community in Malaya put together a sum of 2,250 sterling pounds to purchase The Jaffna. Image courtesy wikipedia.org

According to The Encyclopedia of the Sri Lankan Diaspora, the above-mentioned group of Tamil migrants from Jaffna to Malaya, too, decided to raise money to contribute a little two-seater fighter airplane to the British Malayan authorities.

In spite of limited economic resources, in the year 1915, this community of Jaffna Tamils extended their generosity to the British Government by collecting a sum of 2,250 sterling pounds to purchase the fighter plane for the British Royal Flying Corps (RFC).

Like most aeroplanes of its day, The Jaffna, too, was a very light biplane, but with a dual purpose; it could be used as a fighter plane and a night bomber. Since it was a two-seater plane it could carry one passenger along with the pilot, the former able to fire the guns or drop bombs.

Capt. Elmo describes The Jaffna as: “a Farman FE2b with a 120 H.P. Beardmore engine and a prop that rotated behind the pilot, which was known as the ‘pusher.’ The propellor fitted behind gave a clear frontal vision to the pilot, enhancing the ability to fire a machine gun mounted on top of the nose cone.” [2]

Given the choice to name the plane themselves, the group chose to have it named after the homeland they had left behind, and it was gifted to the British RFC on the 22nd of December 1915.

The legacy of The Jaffna

The fate of The Jaffna is a mystery; some say the plane was shot down and subsequently sank into the ocean, but it is unclear if these accounts are true, as no official records mention this.

Though not much is known about this fighter plane, the story about it, and the people who funded it, is a fascinating one. Even if it was with just the cost of a single plane, this group of Ceylonese was willing to contribute to the war effort, in support of the British Government and the allied forces.