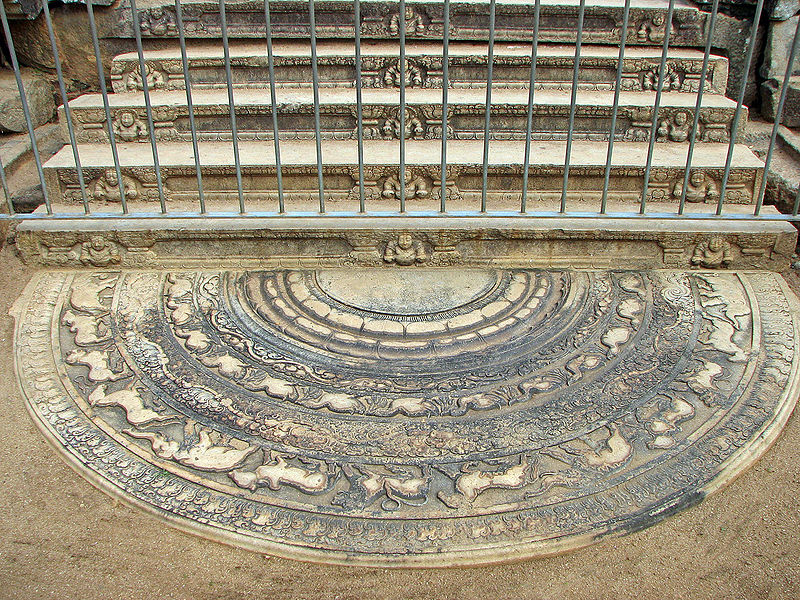 Found near the entrance of doorways, or at the foot of steps leading up to Buddhist religious sites—both ancient and contemporary—a moonstone is not just a prominent architectural feature. It is also a good example of the artistic capabilities of stone workers in the many ancient kingdoms of Sri Lanka.

“Sri Lanka, India, and Myanmar are a few countries where moonstones have been discovered at Buddhist religious sites,” said art historian Ganga Rajinee Dissanayaka. “While archaeologists have not been able to find a definite reason behind the creation of moonstones, some say that they may have been carved for decoration.” According to Dissanayake irahandagala, aroha, chandra, and padmasheela are some of the other names which have been given to moonstones. Image courtesy lauramcadams.com

A moonstone is said to take the shape of a half-moon (ada sanda), hence the name sandakada pahana in Sinhalese. The Mahavamsa makes mention of moonstones, while the Pali chronicle Samantapasadika refers to a carving called a patika, which is described as a half-moon shaped stone.

Moonstones Of The Anuradhapura Era The moonstone at the entrance to the Anuradhapura Dalada Maligawa—the first temple where the tooth relic was kept. Image courtesy hiveminer.com

The moonstones of this era had a similar feature: an outer ring carved with flames.  They also contain carvings of four different animals—the elephant, horse, lion, and bull. In some cases, the four animals can be found in one ring of the moonstone, in others, each of these beasts are found in four individual rings.

There are other carvings found on these moonstones: a creeper or wavy stem with leaves,known as a liyawela in Sinhalese, a floral pattern called palapethi, a line of swans each with a flower in mouth and a fully-bloomed lotus flower.

While many theories have been put forward by historians in regard to the combination of patterns found on the moonstones of the Anuradhapura period, the most widely accepted theory is one which was put forward by Professor Senarath Paranavithana.

According to his theory, the outer ring of fire represents the never-ending cycle of life and the pains of passion that people experience. The four animals, the elephant, horse, lion, and bull, represent the four noble truths of life (chathurarya sathya), or the four stages of life, namely, birth, old age, disease and death, while the creeper with its leaves represents desire.

The swans, which, according to myth, are said to be capable of separating milk from a mixture of milk and water, are symbolic of good and evil, while the floral pattern symbolises the path towards nibbana, with the lotus a motif for nibbana itself.

The patterns displayed on these moonstones, thus, stand in for the core teachings of Buddhism. The swan, for instance—a symbol of good and evil—served to help people understand the four noble truths of life, so they could choose the good and leave out the bad, in the same way a swan supposedly filters the milk out of the mixture of water and milk. By separating the good and bad in their lives, people can then progress towards nibbana.

Moonstones Of The Polonnaruwa Era During this era, moonstones were also carved at the entrance of buildings which were not of religious importance. Image courtesy wikipedia.org

According to Dissanayake, during the Polonnaruwa era, two small change was made to the carving of moonstones: the motif of the bull and the lion were no longer present.

Dissanayake stated that the influence of Hinduism on Sri Lankan culture at that time may have been the reason for the removal of the bull from the moonstone. The bull is an animal sacred to the Hindus and stepping on this motif may have been regarded as disrespectful.

The carvings of the lion may have been removed, perhaps out of respect to the Sinhalese people. Instead, the motifs of the bull and the lion were introduced onto the balustrade (korawakgala) during this era.

“The best example of a moonstone from this era,” said Dissanayake, “is the one found at the northern entrance of the Vatadage in Polonnaruwa.”

The Moonstones Of The Gampola And The Kandy Eras The moonstone at the entrance of the Dalada Maligawa in Kandy. Image courtesy sridaladamaligawa.lk

The moonstones that were carved during this era did not include any patterns or motifs of animals—they only contain the motif of a lotus bloom surrounded by a liyawela.

According to Dissanayake, these moonstones were of lesser craftsmanship than those of the Anuradhapura and Polonnaruwa kingdoms.

“It is unclear as to why the craftsmanship of these comparatively more recent moonstones is not as elegant as the older moonstones. So far, the only possible reason we could identify is the unsteady political situation of the island during that period of time—it may have caused a decline in the field of arts and crafts,” she said.

Moonstones, while not unique to Sri Lankan history and architecture, are a fascinating artistic and architectural feature. Regardless of the level of skill and workmanship, they are all signposts in the complex and intriguing story of Sri Lanka’s ancient kingdoms. Even today, a moonstone can be found at the entrance to many temples and shrines built in the modern day.