A chatty is a type of pot used for cooking curries. It is made from red clay and has a lid. Image courtesy margueriterichards.com

Rice and curries are our staple meal, and many older Sri Lankans claim that one of the best ways to make a curry is to use traditional clay pots or mati walang. These pots are shaped from red or black clay on a potter’s wheel and are either sun dried for a few days or fired in a kiln to make them hard and brittle.Traditionally, rice, too, was cooked in a pot on a fire or stove. Known as a bath muttiya, this is a round pot with a narrow opening. 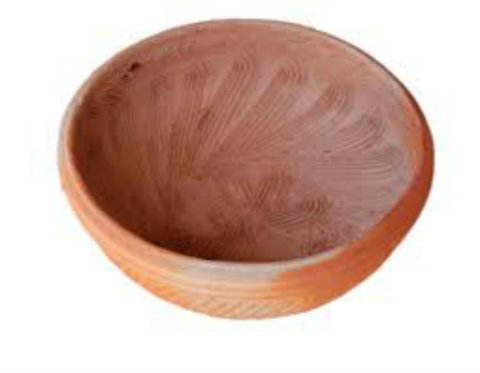 This utensil is also made out of clay, just like the walang, and is used to wash rice and separate the grains from chaff and little stones. The bowl-like nambiliya is carved with lines or grooves on its inside. The rice was placed in it with water and the contents were swirled around—the stones would get caught in these grooves, while the chaff would float to the top. The rice and water would then be poured into the bath muttiya, cooking pan or rice cooker, ready for cooking. The miris gala is a grinding stone used to grind ingredients like chillies and cumin seeds. Image courtesy margueriterichards.com

In Sinhalese, these items are called the miris gala, which literally translates to ‘chilli stone’, and the kurahan gala or the ‘finger millet stone’. The miris gala is made up of two pieces of thick, heavy stone, most often granite. The base is a flat piece of stone and a cylindrical stone like a rolling pin is used to crush ingredients, usually chillies for pol sambol or lunu miris.

On the other hand, the kurahan gala is the tool used to grind finger millet—better known as kurakkan—or rice to make flour used in cooking. Like the miris gala, it is most often made out of granite. It consists of two pieces of stone which were placed on top of each other—one is the circular base and the other is a slightly oval shaped stone with two holes made into it on either side. A wooden stick-like tool is placed into one of the holes, and is used to turn the grinding stone around on its base.

Now, with the widespread availability of different spice powders and flours in grocery stores and supermarkets, these tools are very rarely seen unless one ventures out of the urban and suburban areas. 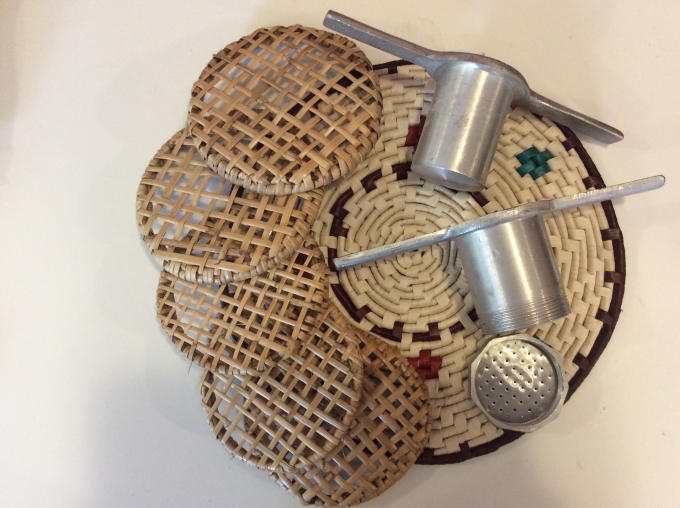 They are then placed on small, round mats—called indiappa thattu—and steamed. The press was traditionally made out of fired wood and the mats out of bamboo, but now stainless steel presses and plastic mats are more in use in the kitchens of local homes and street shops. 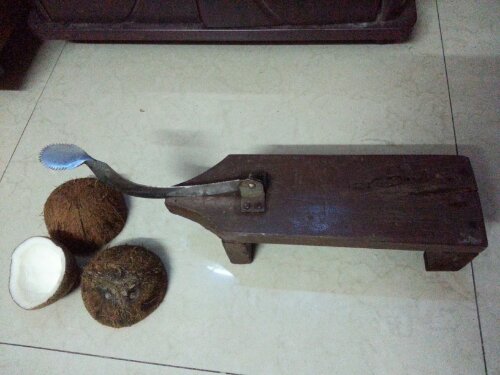 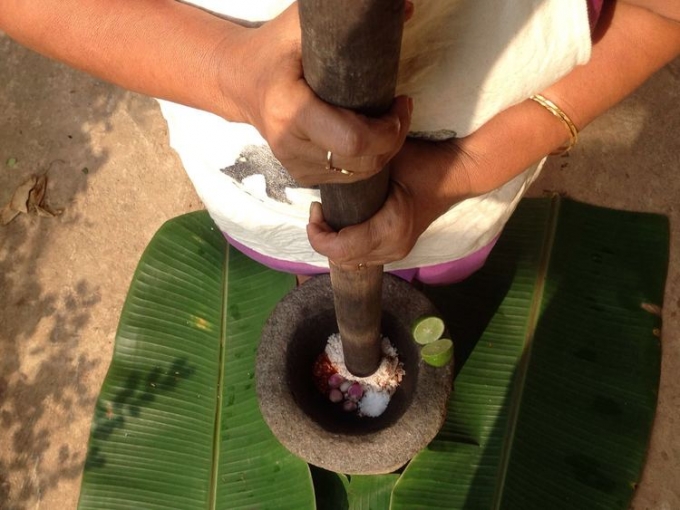 A stone mortar and a wooden pestle. Image courtesy margueriterichards.com

Known as the wangediya and the mol gaha in Sinhalese, the mortar and pestle is used  to crush ingredients like ginger, garlic and cumin seeds for curries. The ingredients are placed in the chalice-shaped mortar, and the pestle is used to crush the spices.

There are two versions of the traditional mortar and pestle, the smaller version is made of wood and could be kept on a table or any other surface. The larger version is mortar carved out of stone and a large wooden pole used as the pestle. This could only be kept on the floor.

Even today, this particular kitchen equipment can be found in the kitchen of a Sri Lankan home, usually for the purpose of making pol sambol or lunu miris. Grated coconut, finely chopped onion, chilli flakes, chilli powder, salt, maldive fish and lime are put together into the mortar and crushed together to make pol sambol, while the same was done to finely chopped onion, chilli powder, chilli flakes and lime to make lunu miris. 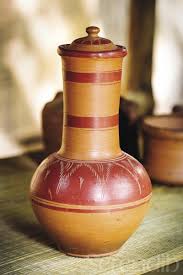 Water pitchers like this are made out of fired, hardened clay which is still porous enough to let the night air cool the water inside of it. Image courtesy serendib.btoptions.lk

The guruletthuwa is the earthenware water jug or vessel that was traditionally used in Sri Lankan homes. It, too, is fashioned out of clay that was made hard and brittle by sun drying or fire, but was still porous enough to allow the night air to cool the water which was stored in it overnight. Its companion is the water pot or kala gediya which is used to fetch water from a well or river. The guruletthuwa can still be found in certain homes, sometimes with earthenware cups or tumblers to match. Before stainless steel and plastic took over our kitchens, coconut shell spoons were used to mix and serve curries. Image courtesy pinterest.com

The famous polkatu handi pair well with the earthen cooking pots that our rice and curries were traditionally made in. The head of the spoons are made out of lower part of a clean, sandpapered coconut shell, while the handle is made from wood of the coconut tree. Sweetmeats like konda kavum are made in woks like this—nowadays these pans are more commonly used to make hoppers. Image courtesy Youtube/Dominique Jeanneret

In Sinhalese this pan is called a thatthchiya, and was traditionally used to deep fry sweet meats like kevum and kokis. This bowl shaped frying pan bears many similarities to the woks used in East Asian cooking, notably in making Chinese food. Nowadays the wok is also known as a hopper pan, because it is mostly used to make hoppers.

Some of these utensils, like the nambiliya and the grinding stones, are rarely seen in action now because of the wide availability of modern cooking equipment and packeted ingredients like rice, grain flours and spice powders. But even though open fires have been replaced with stoves, and rice cookers and refrigerators have taken the place of traditional food preservation methods, there is no doubt that some of these traditional local cooking tools are still preferred by many Sri Lankan cooks.