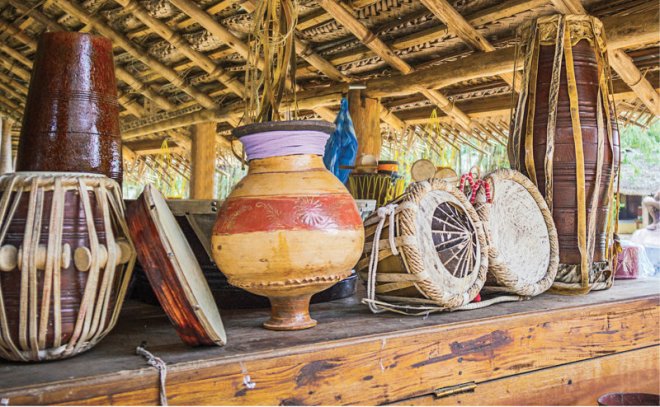 Speaking to Roar Media, Professor Karunaratna Bandara, Director of the Police Cultural Division and the author of the books Pahatharata Bera Vadana Sampradaya (The Art of Low Country Drumming) and Udarata Bera Wadana Kalava (The Art of Upcountry Drumming), said that historically, sixty four drums were part of the country’s collection of musical instruments.

“Some academics who have conducted research on the topic of Sri Lanka’s music history have come across the names of all these traditional drums. Unfortunately, we are not certain about the features of these drums, because this information has not been written down in any historical records,” said Professor Bandara.

The Professor went on to say that right now, only ten of these traditional drums are currently in use for ritualistic and aesthetic performances.

It is the Kandyan drum which is the main instrument of accompaniment for the ritualistic dances of the Kandyan tradition of dance. Image courtesy YouTube/Afro-Lankan Drumming

In Sinhalese, the Kandyan drum is known as the udarata beraya and the geta beraya. It has traditionally been used as an accompanying instrument for the ritualistic dances which make up the Kandyan tradition of dance—hence the name udarata beraya. The Sinhalese name geta beraya was actually given to this drum because of its shape—it has a barrel-like shape and the width of its centre is much wider than its two sides.

The two sides of the drum are covered with two different skins and they emanate two different tones of sound—one side is covered with treated cattle hide and gives off a lower beat, while the other side is covered with a treated goat hide and gives off a higher pitched beat. The rope like fastenings—called warapata in Sinhalese—which hold the drum skins in place were traditionally made from treated cattle hide. This drum is played by hand.

The Low country drum is mainly used in the rituals and dances of the Low country or Ruhunu tradition of dance. Image courtesy YouTube/Afro-Lankan Drumming

This drum is known by several names in Sinhalese. A few names include: pahatharata beraya, dewul beraya, dhik beraya, ruhunu beraya, goshaka beraya and yak beraya. It is the main instrument played during the ritualistic dances of the Ruhunu tradition of dancing. It was given the name goshaka beraya because of the loud, bass sound it emanates when played, while the name dhik beraya was given to it because of its long, cylindrical shape. This drum, like its upcountry counterpart, is played by hand and its drum skins and fastenings are made from treated cattle hide.

The davula is played in accompaniment for Buddhist temple rituals and also during the rituals and dances of the Sabaragamuwa dance tradition. Image courtesy lanka.com

The davula is the main percussion instrument used in accompaniment for the dances of the Sabaragamuwa tradition of dance. It has also traditionally been played during rituals in Buddhist temples like the aluyam duraya (morning prayers), madiyam duraya (afternoon prayers) and handha duraya (evening prayers). This large drum is cylindrical shaped, with one side played by hand while the other is beaten with a drumstick known as a kadippuwa.

The thammattama or pokuru beraya is a twin drum which is tied to the drummer’s waist and beaten with two drumsticks. One of the drums is slightly larger than the other and it is covered with a treated cowhide and emanates a bass sound when beaten. The smaller drum is covered with a treated skin of a young calf and has a slightly high pitched beat. The fastenings which hold the drum skins in place are made from treated buffalo hide or thick goat hide. Sometimes this drum is played in accompaniment with the davula at Buddhist temple rituals.

The banku rabanaya is a large drum which is sometimes played during avurudu festivities. Image courtesy lanka.com

There are four subtypes of this drum, namely the banku rabanaya, ath rabanaya, viridu rabanaya and karakawana rabanaya. It is the banku rabanaya which was traditionally played by villagers during avurudu celebrations and also during Sinhalese wedding ceremonies. The large circular drum was usually played by four women who sit around it on benches—hence the name banku rabanaya. Even today, this drum is sometimes played during avurudu festivities. The ath rabanaya and viridu rabanaya are favoured by street musicians because they are much smaller and easier to carry than the other traditional drums.

The hourglass shaped udekkiya is also a drum popularly used in the Kandyan tradition of dance. Image courtesy lanka.com

The dekkiya is an hourglass-shaped drum which is hung on the shoulder of the drummer with a small rope, and the sound of the drum is controlled by tightening these ropes before playing. The drum is made from two pieces of wood which are bound together with leather, with thin goatskin used for the drum skin.

The udekkiya is a smaller version of the dekkiya and just like the former, the ropes which are connected to the drum need to be tightened before it is played. The udekkiya is one of the instruments of accompaniment used in the rituals of the Kandyan tradition of dance—especially the udekki natuma and the Kandy Esala Perahera. Its lower country counterpart—known as the pahatharata udekkiya in Sinhalese—differs slightly in appearance, and is played as an accompanying instrument in the ritualistic dances of the Ruhunu tradition.

The bummadiya is a lot different from the other traditional drums; whereas the bodies of the other drums are made from wood, the bummadiya is created with a clay pot. A thin goatskin is fitted and tightened on the mouth of the pot, and sometimes the pot is painted with motifs for a better finish. It was traditionally played by farmers and other villagers during harvest rituals. Nowadays, it is played on stage during performances of harvest ritual dances.

Unlike the other drums mentioned above, the dandu beraya does not have drum skin. Image courtesy lanka.com

This simple drum is created with a length of bamboo, and unlike the other drums it does not have a drum skin. It was traditionally used by farmers as a means of scaring away crows and other pests who destroy their crops with a loud sound. Nowadays, it is used on stage during performances of harvest ritual dances along with the other drums like the bummadiya and thammattama.

According to Bandara, the art of making drums in Sri Lanka has evolved over time. In the olden days, each drummer was personally responsible for the making of their own drum right from the selection of the wood and drum skin to the assembling of the drum. Nowadays it is not the drummers themselves who create these drums; instead a group of artisans come together to create these traditional drums.

“There are several areas in the country where the making of drums takes place,” said Professor Bandara. “Udugampola in the Gampaha district, Alawela in the Kegalle district and Kundasale in the Kandy district are some of the areas which are most famous for the making of traditional drums,” he added.

Even though in the past many of these drums were played during Buddhist rituals and religious festivals, Bandara informed Roar Media that at present, the art of playing and making drums is more for aesthetic than  ritualistic purposes. In fact, many government and private institutions, such as the University of Visual and Performing Arts, the Cultural Department and the Police Cultural Division, are involved in teaching, training and encouraging people of all ages to play these traditional drums, mainly for aesthetic purposes.