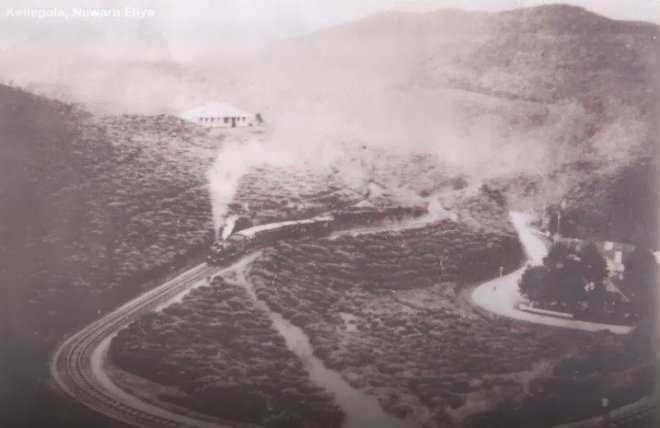 The train rides to Kandy and Ella are now two of the most popular routes taken by visitors, because of the scenic view, but in the days of British Ceylon, it was the train ride to Nuwara Eliya on the now defunct Udapussallewa railway line that was most favoured.

The early beginnings of the Udapussallewa railway line

The Udapussallewa Railway network was constructed in the year 1900. Image courtesy lowawate.blogspot.com

Plantation agriculture was introduced to the central hill country region of Sri Lanka during the British Colonial Era. In order to connect the upcountry and lowcountry regions of the island, and therefore increase efficiency in the plantation industry, the British decided to establish the country’s railway network.

At first the trains ran only up to Badulla—even though Nuwara Eliya was the centre of Britain’s tourism and commercial plantation sector, no railway system had been constructed here. As a result, other means of transportation were needed for plantation crops grown in the upcountry region and travel to and fro.

It was in 1895 that the British Governor Sir West Ridgeway realised the need for a railway system in Nuwara Eliya. Following his suggestion, in the year 1900, the Railway Department began constructing this railway network, with a proposed distance of 19 miles (link in Sinhalese).

The five main railway stations on this line were Blackpool, Nuwara Eliya, Kandapola, Brookside, and Ragala stations. Three smaller stations named Pedro, Summer Hill, and Portwood were also constructed between the main stations of Nuwara Eliya and Kandapola; the purpose of these minor stations was to transport tea throughout the region.

The total cost of this entire railway network amounted to approximately Rs. 1.6 million, and the project comprised of three phases.The first phase of the railway between Nanuoya and Nuwara Eliya, was opened on the 14 December, 1903, by the then Governor Sir Henry Blake. The following year, the second and third phases of the railway network were completed.

British writer Henry W. Cave, who penned The Ceylon Government Railway, spoke of how the short journey along the Udapussallewa railway line allowed travellers to witness the difference between the wet and dry zone regions of the country.

The shutdown of the Udapussallewa railway line

A special garrett engine produced by the British Bayer Peacock company had to be shipped from England, as the railway network had been built on inclined hills and ridges. Image courtesy locolanka.blogspot.com

During the 1940’s, the Britain’s economy began to crumble after the end of the Second World War. This was the primary factor which led to the eventual shutdown of the Udapussallewa railway line. In 1942, the railway line between Ragala and Nuwara Eliya was shut down, while the railway line from Nuwara Eliya to Udapussallewa was closed on 2 May, 1948. Following the shutdown, goods were transported via lorries as the road networks of that time were well maintained.

The station at Udapussallewa, however, functioned for some time even after the railway line was shut down, as the exchange of goods brought from and sent to other stations, took place here. A few years later the station, like the railway line, was permanently shut down.

Because the railway network had been built on inclined hills and ridges, a special garrett engine produced by the British Bayer Peacock company was shipped from England. After the Udapussallewa railway line was closed down, the engine was in use for a while on the Kelani Valley railway line—today, only the tank of this engine remains. The rest of the engine was broken down in the early 1980’s and sold as scrap material.

All that presently remains of this railway network are a handful of buildings and the remnants of the railway track that can be seen in certain places.

The Nuwara Eliya train station, which was once part of this line, is now a public bus depot, while the Brookside train station has been converted into a pub. The Ragala train station, too, has a different function these days; several shops and small businesses have been set up inside the old station.

Suggestions had been made to reopen this railway line to further the tourism industry, but the cost and the rough terrain of the hill country have have posed difficulties in executing this project. Perhaps in years to come, with access to newer technology, this route may be reopened, and views like those seen just a century ago may be enjoyed again.