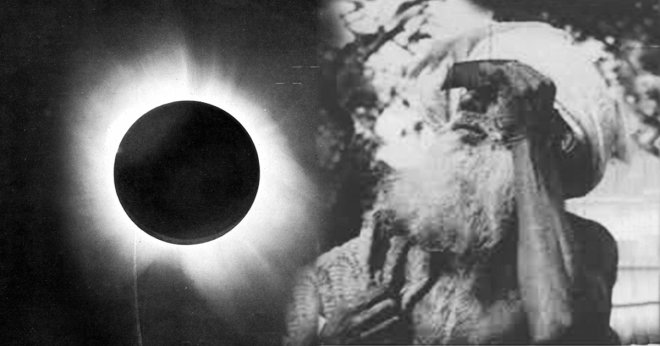 Hakiem Hanif
20 Feb 2021
4.4K Views
4.4K Views
Share Save for later
This article is written by a contributor.If you want to write for us, check out our contributor platform.

On the day when night fell in the noon,
Emily rushed to the  backyard,
The dark lass came running in  a hurry,
Why perhaps the gods only know,

But didn’t you drink the Wadakaha potion?

The lass who wished to be fair,
Was fooled by the potion,

This here, the Wadakaha potion...

So go the lyrics of a popular baila song (translated from the original Sinhala) written and performed by the legendary Wally Bastiansz himself. The song, which is literally named ‘Wadakaha Sudiya’, addresses a certain event that took place during the solar eclipse that was visible in the skies above Ceylon on 20 June 1955.

It is not very often that Sri Lankans get to witness a total solar eclipse, so when scientists announced that one would be visible from the island on 20 June 1955, a sense of harmless, juvenile excitement spread across the country. And because astronomers everywhere realised that the eclipse can be viewed very clearly from Sri Lanka, quite a few of them arrived in the country from far and wide.

Interestingly, Soviet astronomers were not allowed into the country mainly because the government at the time was a close ally of the United States.

At the time, the locals did not really know how to view a solar eclipse safely. So the print media and Radio Ceylon took it upon themselves to educate the public on the matter. Since astronomers and medical professionals had warned everyone not to look at the eclipse directly, the government even decided to declare 20 June a school holiday, ostensibly to prevent thousands of mischievous children from daring each other to willingly go blind.

The days and weeks before the eclipse saw all sorts of people trying to have their two minutes of fame. It is reported that some astrologers predicted a doomsday event. Others claimed that bad things could happen due to the eclipse. Needless to say, there was a lot of excitement building up.

On 19 July 1955, Lankadeepa — the country’s most popular daily newspaper at the time — chose to publish on its front page an article penned by someone who was supposedly an “astrologer”.

Through his article, this so-called astrologer had urged women everywhere to drink ‘wadakaha’, or wild tumeric, a concoction made from an indigenous recipe that is believed to make those who consume it vomit rather violently. The charlatan further went on to claim that anyone with a dark complexion who consumed wadakaha during the eclipse would become light-skinned overnight. No one knows whether he knew of its actual effects, but author Jayampathy Jayasinghe claims it was all an elaborate prank meant to fool an entire country.

Anyway, the article quickly became a hot topic, and people began scurrying about to gather the necessary ingredients to prepare wadakaha. A few went a step further and meddled with the recipe  in the hopes of becoming fairer. With their cupboards full of wadakaha and heads full of dreams in which they were crowned the next ‘Avurudu Kumari’ of the village, they went to sleep.

As the next day dawned, the country waited with trepidation to see what the eclipse would bring. At 8:11 AM, darkness enveloped the country for four minutes. As sunlight again began to filter through the clouds at 8:15 AM, all hell broke loose.

Suddenly, reports of people vomiting and falling victim to violent diarrhoea started to come in from around the island. Major hospitals across the country saw a sudden influx of patients, who all shared one thing in common — they had all consumed wadakaha. Among those who consumed wadakaha were Balangoda Ananda Maithri Thero and Wijayananda Dahanayake, a legislator at the time who would go on to become the country’s Prime Minister a few years later.

Records indicate that in the aftermath of the eclipse, 1,200 people from Colombo, 500 from Kandy, 200 from Galle, 75 from Balangoda, and 45 from Chilaw were hospitalised due to the effects of consuming the concoction peddled by the astrologer and legitimised by the Lankadeepa.

Fortunately, everyone who fell ill made a full recovery, and no deaths were reported.

However, this episode does go to show that no matter how far we have come as a society, there will always be brief episodes where many fall prey to the designs of a few. It wasn’t so long ago, afterall, that another potion hit the headlines in Sri Lanka — partly for its promise of a miracle, but largely because so many people actually believed in it.