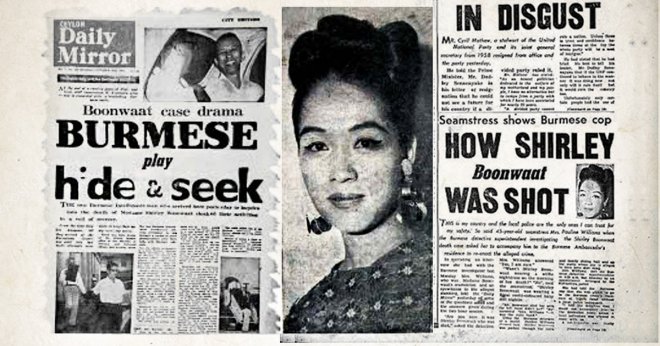 Shannine Daniel
1 Nov 2021
4.5K Views
4.5K Views
Share Save for later
This article is written by a contributor.If you want to write for us, check out our contributor platform.

“Was the perfect murder carried out in Sri Lanka five decades ago?” The murder in question is that of Shirley Boonwaat, who was murdered at her residence on the 15th of October 1967, near the Liberty Cinema on Dharmapala Mawatha (then Turret Road). The alleged culprit was her husband, the then Burmese Ambassador W. K. H. Sao Boonwaat,  who may have gotten away with the crime due to his diplomatic immunity. At the time, the Ambassador’s home was known as ‘Carlton Lodge’ — revamped in the recent past to become the high-end Capri Club restaurant.

According to an article in the Daily News by journalist K. K. S. Perera, two young men working on a building site opposite the residence heard the sounds of gunshots coming from the Burmese Ambassador’s house. The two witnesses told the police they had seen a woman in a nightdress run towards a car parked near the Green Path entrance to the house.

The two young men said that they had watched in “shocked silence” as a man following her, fired a second shot. Adding to the confusion, another man had run out of the house and half-dragged, half-carried the woman back indoors. Even though shots had been fired, and witnesses were outside the residence privy to the violent scene that took place, the police were not allowed to enter the premises as diplomatic immunity had been claimed, wrote Perera, who had visited the National Archives to read old newspapers that had published stories about the case.

The Ministry of Defence and External Affairs of that time contacted the Burmese Government, through Mr Nandadeva Wijesekera, then Sri Lankan Ambassador to Burma (now Myanmar) and he had allegedly given a detailed report of the Police investigations into the envoy’s wife’s death. The Burmese government had stated that both the Sri Lankan government’s report of the events and the Burmese Embassy’s report of the events would be studied carefully before Ambassador Boonwaat was called back home. Thus, the investigation was taken out of the hands of local law enforcement officers.

“As the Burmese Embassy officials kept mum over the death of the wife of Boonwaat, and Government’s law enforcement units being unable to intervene, the Defence Ministry immediately ordered the Immigration authorities to ground any aircraft which tried to fly any personnel of the Embassy out of the island. Accordingly, the CID and Customs too were ordered to thwart any attempt by the Burmese to forcibly board any aircraft or ship. Immigration officers were flown to the airport in KKS (Kankesanthurai) as a preventive measure against any attempt by Burmese personnel to slip through the security net. They placed immigration, customs and CID men on a 24-hour alert at all ports and airports,” Perera wrote in his article for the Daily News dated January 25, 2019.

A questionable death and cremation with no records

According to Singapore’s Straits Times, Sao Boonwaat returned to Burma a couple of months later and never faced trial for the killing of his wife. He has, however, become a somewhat notorious example for the downside of diplomatic immunity, specifically in the case of crimes allegedly committed by foreign diplomats.

Mrs Boonwaat’s cause of death went down in the records as cerebral haemorrhage due to hypertension. The death certificate for the body was issued by Dr L. C. Mendis, an hour after the incident took place. The doctor had also told the police that he discovered Shirley Boonwaat’s body at the foot of the staircase, and his suggestion for a postmortem was rejected by the Ambassador.

According to an article published in The Sunday Times of October 22, 2017, there is no record of Madam Shirley Boonwaat being cremated. The burial and cremation register of the Kanatte General Cemetery in Borella has no entry of her cremation, even though the Daily News, the Times of Ceylon and the SUN newspapers of that time had captured a photograph of the couple’s little children leaving the crematorium with a Burmese official.

Although it is hard to know the truth today, it is speculated that her friendship with musician Rex de Silva may have led to her demise.

“It is almost three years to the day when Shirley Boonwaat and I first met. I remember the day very well; it was October 27, 1964. I was then playing at the ‘Blue Leopard’ when Shirley walked in with some friends and we were introduced,” de Silva told a Daily Mirror journalist, in an interview the day after Madam Boonwaat’s death.

“I still cannot believe that Shirley is dead. It was only the night before her death that she dropped in at my place of work, waited till I finished and drove me home. She was full of life and had a zest for living. She could get enthusiastic as nobody could for any cause which stirred her sympathy. Soon after Shirley and I met we began to get together and one of the first things she confided in me was her unhappiness,” he added.

de Silva had also been questioned by the Police —  and had told them that he had lived in the Boonwaat household for nearly a year before he decided to leave. According to Perera’s research, de Silva migrated to Australia and then passed away. The Sunday Times article states that there is no information on Ambassador Boonwaat, while many of the other key people involved in the investigations and the proceedings after the death occurred are no more.