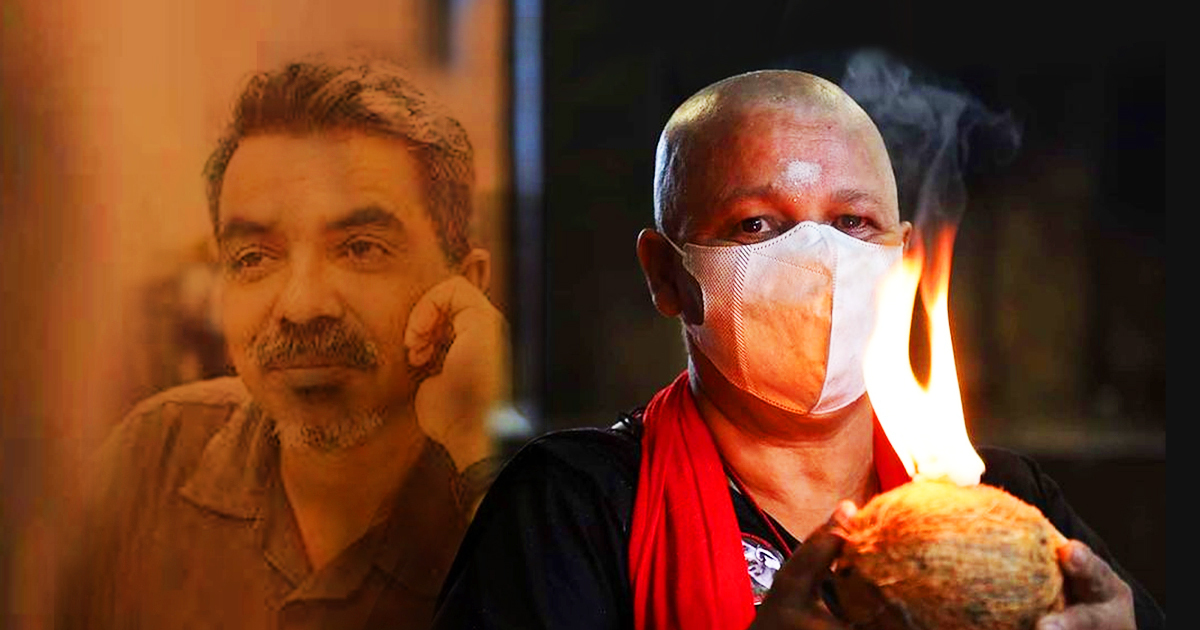 At the height of their power, few in Sri Lanka dared to challenge the Rajapaksa family. For years the political family enjoyed the support of the masses; not only was the opposition decimated, but also had to face the wrath of the adoring masses.

But when her husband, Prageeth Ekneligoda, a cartoonist and journalist went missing on 24 January 2010, Sandya Ekneligoda openly accused the Rajapaksas, naming them as those behind her husband’s disappearance..

Her continued struggle to find her husband has led her to police stations, courts and to the Hague Tribunal. But in 2022, she took a different, more desperate approach; she abandoned her white saree of mourning, shaved her head and invoked the vengeance of gods.

The Criminal Investigations Department (CID) probing the disappearance of Ekneligoda, who was a staunch critic of the Rajapaksa regime, blamed a military intelligence unit for the abduction. During the court proceedings, two military intelligence officials quite stunningly claimed that none other than former President Gotabaya Rajapaksa — who was Secretary to the Ministry of Defence at the time — had given the direct order to abduct and later kill Ekneligoda.

But for nearly 13 years since, Sandya has been taking on the Rajapaksa’s head-on in a lone battle for justice against the powerful family, challenging them publicly and refusing to back down despite threats on her and her two sons.

With Gotabaya Rajapaksa ascending to the presidency in 2019, on 24 January 2022, Sandya launched a new battle to seek justice for her husband. With the legal system appearing to have failed her and her faith in the authorities and institutions of justice  shattered, Sandya decided to seek divine intervention to punish those responsible for Prageeth’s enforced disappearance.

On that day, the wronged wife delivered a missive containing a traditional ‘Vas Kaviya’ – a poem wishing the destruction of enemies– titled the ‘Naga Sandeshaya’ (The epistle of the Cobra) at the Modara Sri Maha Badra Kali Amman Kovil. The missive, which appeared as if written by the Goddess Pattini to the Goddess Kali, the vanquisher of all evil, called for the destruction of the Rajapaksas and others responsible for Prageeth’s abduction.

Dressed in a black saree and taking part in a traditional Hindu pooja called ‘Viratham’ Sandya shaved her head before the Goddess Kali and called on her to deliver justice and punish those responsible. Months later, the Rajapaksas’ have fallen out of favour and are ,at least on the face of it, vanquished from the country’s political arena.

For Sandya, the prayer was an attempt to seek natural justice when justice through judicial means failed her.

“After the rise of Gotabaya Rajapaksa [to power], I started feeling isolated in my struggle,” she told Roar Media. “People were not allowed to gather due to COVID-19 and could not engage in any protest without being arrested. So I wanted to do something, even on my own, that is creative and would also draw attention to my fight against them.”

The Epistle That Came True

Sandya has previously incorporated powerful female figures like the goddesses Kali, Pattini, the  Mahapajapati Gotami and the Virgin Mary in her 13-year-long struggle for justice.

“I always opted to choose female figures revered by the people who were wronged and suffered for their husbands or sons,” she said. “I also chose the Goddess Kali as she is considered all-powerful. I was inspired to shave my head by the Tamil mothers looking for their missing sons,” she said. “Vas Kavi is also a traditional concept found in Sri Lanka. The only difference is that I opted to recite the Vas Kavi openly, instead of secretly doing it.”

Though some believed Sandya was engaged in only scare tactics, attempting to wage a psychological warfare against the Rajapaksas — known believers of the occult — she says these practices were carried out in faith.

“Things we wish for through these acts may or may not happen, but they are carried out with faith and hope,” she said.

She did admit however, that she often fashions her protest depending on her opponent and their particular ways. “The Rajapaksas and most of their allies believe in the occult. Therefore I knew the Vas Kaviya would deeply upset them,” she said.

Her epistle to the Goddess Kali asked for the Rajapaksa family to be ridiculed and forced out by the people that once supported them. She asked the goddess to keep them in constant fear, to destroy their homes and bring an end to the rule of former President Gotabaya Rajapaksa.

“Show them what justice is, “ she asked the fierce goddess.

And just seven months later, the words and wishes of Sandya’s epistle came true. The Rajapaksas have fallen, driven out by the people that once revered them.

“In January, when I delivered my epistle and took part in religious practices there was no uprising against the regime. The people had not even thought of coming out onto the streets,” she recalled.

The significant role played by citizens in their efforts to force out the Rajapaksa regime is undeniable. But there is also the belief that Sandya’s constant prayers to the gods have had some hand in this remarkable feat.

“It was startling to see Gotabaya Rajapaksa and others being driven out by the people, and how he had to go from place to place in search of a safe haven. I watched in shock as their ancestral home in Medamulana went up in flames. All this was specifically mentioned in the epistle,” Sandya said. “This might defy logic, but I am now forced to believe my actions have had some effect.”

Knowing that the Rajapaksas cannot be brought before the courts for Prageeth’s disappearance, Sandya says only a punishment from the gods, such as this, could be given to the powerful family.

Can the Rajapaksas be entirely vanquished? Sandya says she is unsure. “They are still deeply rooted in this country and society. I am not sure if they can be fully defeated” she said.

But she says she now feels vindicated. “The majority of the people now believe in my struggle. Earlier even regular people gave me a hard time and I faced numerous threats. Tuk-tuk drivers would refuse to take me when they recognised me. But now it has changed. People come up to me and talk to me. They even encourage me to carry on.”

Sandya Ekneligoda’s fight for legal justice is far from over. Despite a spate of arrests in 2015, the majority of the military suspects connected to Prageeth’s disappearance are now out on bail, and the case continues to languish in the court system with no end in sight. She believes it is now at the risk of being thrown out, after two of the key witnesses have retracted their statements.

“The state of the government and the pro-military ideologies are allowing impunity for those responsible,” she said, adding that anyone who commits a crime must be punished regardless of their status. “My efforts in the court and before god is to ensure this end.”

With the Rajapaksas gone, Sandya is now thinking of her next move. “President Ranil Wickremesinghe has a responsibility to deliver justice to Prageeth, as my husband worked along with them against the Rajapaksa regime. He cannot escape this responsibility,” she said.

Despite her 13-year-long battle, Sandya says she is not tired yet. “I have identified how I must now change the form of my struggle. I am not exhausted. Everything I do has meaning. At times I do feel disappointed and sad but I am not tired. I will only feel tired the day I stop fighting for Prageeth,” she said.

And till the day she receives the justice she desires, Sandya has decided her head will remain shaven, and she will continue in her constant toils and prayers. “I will not leave this fight for my children. I am confident I will be able to finish it. I have faith, and that is what keeps life going,” she said.

And what would Prageeth have to say about the epic fall of the Rajapaksas had he been alive? “He would say ‘Sandya, mara wadak ne wela thiyenne’ and smile a curious smile,” she said, laughing. ‘Sandya, the most remarkable thing has happened.’