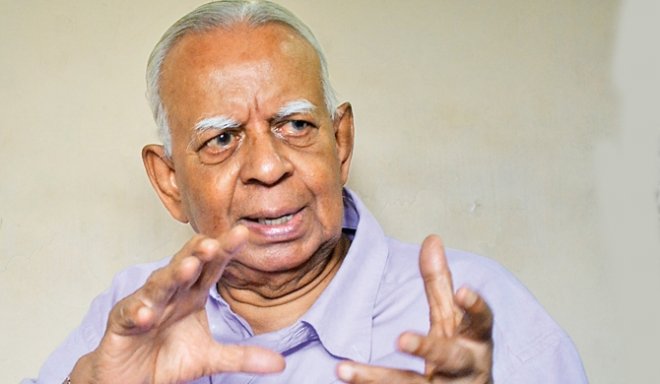 A ‘No-Confidence Motion’, Or What It Means To Have ‘No Faith’

The JO has effectively wielded the no-confidence motion tool, having just weeks ago – on March 2 –  brought a much publicized no-confidence motion against the Prime Minister, in which it laid a number of charges against the Premier, particularly that of economic mismanagement in the the three years since the coalition government took over administration, involvement in the Central Bank Treasury Bond scam and failing to curb anti-Muslim riots that broke out in Kandy last month, while functioning as Law and Order Minister. The ministry was later given to Ranjith Madduma Bandara.

That no-confidence motion was taken up for debate on April 4, and successfully defeated after a majority of the minority coalition parties—particularly the TNA and the Sri Lanka Muslim Congress (SLMC)—stood by the Prime Minister, isolating the JO and part of the Sri Lanka Freedom Party (SLFP) that said it would support the motion against the Prime Minister. The Marxist Janatha Vimukthi Peramuna (JVP) also supported the JO in its motion against the Prime Minister. Despite this apparent show of support, 122 Members of Parliament voted against the no-confidence motion, 76 voted in favour of, while 26 (mostly SLFP-ers who had initially pledged support) abstained from voting.

Crackers were lit late that night in Colombo and the suburbs as United National Party (UNP) supporters celebrated the triumph of its leader Ranil Wickremesinghe, over discontented members of the national unity government. As the unity government heads towards its fourth year in administration, it was made clear the interminable leader of the UNP enjoys a clear majority in the house. But this comes in the wake of President Maithripala Sirisena attempting to oust Prime Minister Ranil Wickremesinghe, when the results of the local government elections held on February 10 indicated the JO’s Sri Lanka Podujana Peramuna (SLPP) had gained traction with the masses.

It was President Maithripala Sirisena’s attempt to oust the Prime Minister that acted as catalyst for the JO to bring a no-confidence motion against the Prime Minister, in the hopes of defeating him at a vote in Parliament and forcing his resignation. Such a scenario would have allowed the JO to partner with the SLFP, displacing the UNP in the national unity government. Since the JO—an ‘unofficial’ political party—is made up primarily of SLFP supporters (siding with former President Mahinda Rajapaksa in his disapproval of the alliance with the UNP), this would have made for an ideal situation for many of those against the policies and values of the liberal UNP.

Earlier on, in 2016, and once again in 2017, the JO submitted no-confidence motions against Ravi Karunanayake. While Karunanayake defeated the first motion (145 against, 51 for, 28 absent), he publicly resigned over the second no-confidence motion that accused him of involvement in Central Bank bond scams of February 2015 and March 2016. His resignation was seen as a major victory for the JO.

But What Exactly Is A No-Confidence Motion?

A no-confidence motion is a statement by a number of members of parliament that demonstrate the elected parliament no longer has confidence in a member of the government—or a head-of state—to hold that position.

Cited as reasons for losing faith are if the elected government feels the person concerned is no longer fit to hold that position because they are inadequate in some respect, or they have failed to carry out obligations, or have made decisions that are detrimental to the functioning of the parliamentary body.

In the case of Ranil Wickremesinghe, the 14 reasons were submitted by the JO to demonstrate their lack of faith in his leadership, while in the case of the proposed no-confidence motion against Sampanthan, the allegation is that he acted in the interest of the government, rather than in the interest of the opposition, which role he is expected to play as the leader of the opposition in Parliament.