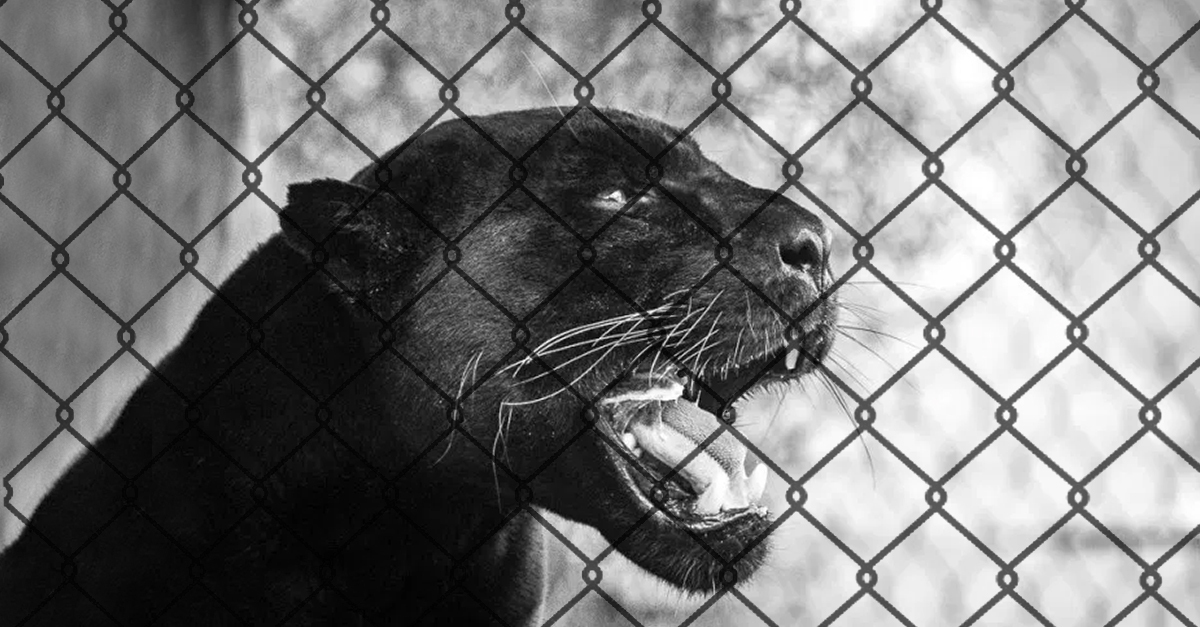 The adolescent creature was fast asleep, its face shadowed by the concave structure at the centre of its enclosure, presumably built to mimic the lofty caves hidden in the depths of the Amazon rainforest where it is found in the wild.

A man-made ‘stream’ flows out to the edge of the enclosure, where a sheet of glass stretching vertically to the ceiling prevents the flowing water from spilling over onto the public.

Behind the glass, in the hot, humid Sri Lankan climate, is a black jaguar—an extremely rare variant of the spotted jaguar. Its dark pigmentation is caused by a genetic mutation that occurs in only six percent of the species.

It is clear that although measures have been taken to ensure the animal has the facilities it needs—a stream, light shrubbery and a dark area to sleep—the enclosure is restrictive. Imposing concrete walls converge into the glass, boxing the animal into a confined space. And once the initial excitement of seeing a real-life black jaguar passes, it is replaced by a bleak reality: an animal that could have been roaming the Amazon Rainforest will live the rest of its life confined to an area of 1, 600 square feet.

The two-year-old cub—Leyar— is the first of many exotic animals due to arrive at Colombo’s National Zoological Gardens in Dehiwala in the upcoming months. Fifteen bird species, a cheetah couple, three jaguars, a giraffe, and four Nilgai antelopes are also expected from various zoos around the world.

The expansion plans were put in place after recent developments to the zoo’s infrastructure in response to a public outcry in 2017, accusing the zoological gardens of animal abuse and mismanagement.

Inhumane attractions like the elephant dances have been discontinued, and animals that are not acclimated to Sri Lankan temperatures—like penguins, are no longer housed at the zoo. In fact, the Dehiwala Zoo, as it is more popularly known, made extensive preparations for the arrival of Leyar the black jaguar. “We had to make sure that we provided the right environment: a nice, dense enclosure with a lot of water, as well as a shaded area for sleep, Director-General Dhammika Malsinghe told Roar Media.  Similar preparations will be made for other exotic animals expected at the zoo later this year.

But the conditions at the zoo are still far from ideal. Monkeys are crammed into small cages closed in by with metal bars on all four sides, and when we visited, the brown bear was eating scraps of rice off a newspaper left for it hours earlier. Conditions like these have gradually changed public opinion on zoos the past few decades, many now believing the model to be outdated.

“It is a traumatic experience to see animals confined,” attorney-at-law and animal welfare activist Lalani Perera told Roar Media. She explained that keeping animals in confined spaces— regardless of adequate infrastructure—has a severe psychological effect on animals.

Deprived of their natural habitat, many animals in captivity suffer from a disorder known as ‘zoochosis’, which manifests in repetitive behaviours, such as constant swaying and pacing. Social animals, like elephants, chimps, elk, and caribou are also affected by the lack of herd companionship.

“Many fail to realise that when children see animals behind bars and [in] such conditions, it gives [them] the message that caging animals for human entertainment is acceptable,” said Perera. “It is time that we move away from the concept of ‘closed zoos’, and take the welfare of these animals more seriously.”

A Site For Conservation

Although the damning conditions for the animals inside zoos is undeniable, they continue to exist as an acknowledged, rich source of education, research and conservation.

“By keeping these creatures in zoos and breeding them in a scientific way, we can contribute to their conservation,” the Dehiwala Zoo Director-General Malsinghe said, citing the example of the white tigers that no longer exists  in the wild, but lives on in zoos.

Internationally, zoo conservation is conducted as  ‘ex-situ’ projects, which occur outside the animals’ natural habitat, and within the zoo, in, for example, captive breeding. The Arabian Oryx, the Eastern Bongo, and many other critically endangered animal species have relied on captive breeding  to prevent their extinction.

However, the success of these conservation efforts has been contested, as only 16 of 145 reintroduction programmes worldwide have actually restored any animal populations into the wild. In addition, most of these were ones conducted by governments, and not zoos.

Perera explained that conservation existed not merely to save endangered species but also to protect the vital ecological services that animals render to their natural habitats.

“Losing a species has adverse effects on entire ecosystems, so the focus of conservation should be to breed these animals with the intention of releasing them into the wild,” she said. “[But] while many zoos, in fact, do that, it is definitely not on the agenda for the endangered species in the Dehiwala Zoo,”  she added.

Although Malsinghe believes that zoos could be used for conservation, she pointed out that the Dehiwala Zoo focused more on education.

“We educate the public, and also act as a resource for school children and university students to learn about endangered species, and the troubles their populations are facing,” she said. “This also contributes—more in the long term—to conservation, by changing people’s attitudes.”

Considering that all animals in zoos must be bred in captivity, it is not always possible to release animals back into the wild. But there are promising alternatives to closed zoos that could provide a necessary middle-ground.

“One alternative is animal sanctuaries,” said Perera. “Sanctuaries are not commercial enterprises —  they care for animals bred in captivity that cannot be released to the wild.”

Another alternative is safari parks, which are commonly referred to as ‘open zoos’. In Sri Lanka, this model has also been trialled in Pinnawala, where animals are kept on land that stretches over 44 acres, which has been landscaped for visitors in a way that doesn’t interfere with or damage the natural habitat of the animals. This open zoo is also separate from the Pinnawala Elephant Orphanage, which has been criticised for its alleged mistreatment of elephants.

Radical models have been pioneered around the world— at the Lehe Ledu Wildlife Zoo in China, people must enter large mobile cages to view animals that are roaming free, the Guangzhou Zoo offers a VR experience of the animals—even those extinct, while a circus in Germany substitutes real animal with 3D holograms.

Circus Roncalli, in Germany uses holograms as a substitute for real animals, preserving the circus tradition while doing away with concerns of animal cruelty.

Perera believes that given the success of open zoos and these other alternative, radical, options around the world, Sri Lanka should be investing more sustainable, humane models rather than focussing on expanding the Dehiwala Zoo.

“Reconstruction must be looked at broadly, and should cover all aspects that will promote zoo animal welfare, including their psychological wellbeing and environmental enrichment,” she said. “Until that happens, it is inhumane to import more animals into the country and expand the Dehiwala Zoo. It would be better to just shut the place down altogether.”