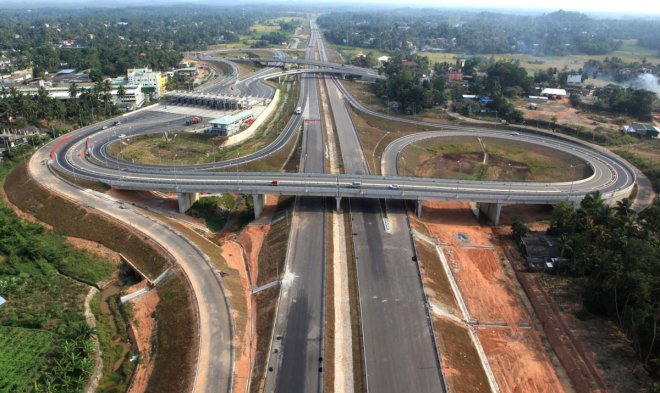 Since November 2011, many people in the country have been enjoying the remarkable ease of the E01 Southern Expressway: a clear, smooth ride between Kottawa and Pinnaduwa, conveniently linking Colombo and Galle in a little more than an hour, covering 95.3 kilometres. On the journey, most would have marvelled at the achievement of the road’s construction, as one glides along sheer tarmac that was once hard rock and sprawling jungle.

Such luxuries are still only in the foundational stages for the majority of the country. Plans have been published for several new expressways: a second extension to the Southern Expressway Project (ESEP), the Central Expressway Project (CEP) with access to Kandy and Dumbulla, and the under-review Ruwanpura Expressway Project (no acronym!). Further expressway developments to Jaffna, Trinco, and other important cities cannot even be conceived until these three projects are complete.

Official information on the projects are often out-of-date, patchy and poorly presented. This leads to critics to calling out corruption, and naysayers lamenting government impotence. Roar Media decided to scour through government websites, and speak to related officials to present the current situation.

Map of Completed, Ongoing and Committed Expressways in Sri Lanka. Image courtesy of Ministry of Highways.

The first extension to the Southern Expressway, connecting the capital of the Southern Province, Galle, with the central transport hub, Matara, opened in March 2014. There are now plans for a further 90km extension to connect the highway to the new Port of Hambantota. As the E01 literally paves the way in road-building in Sri Lanka, its actual construction and completion is not difficult to envisage.

The project is being managed in four sections (below) and construction of the expressway is underway. Going by the ESEP website, however, there appears to be  significant variations in progress between the four sections. “Our project is running very smoothly, with no problems whatsoever. We are on schedule to complete as per the schedule in early 2019.”

Unfortunately, Abeydeera could not speak for section 1-3. The office of section 1 refused to give a comment on their current progress, although their latest online update is from June 2017. The contact details of those managing sections 2 and 3 are not listed, and they appeared to have not updated the website since the project began (in January 2016). Roar Media tried various avenues but was unable to obtain comments.

Travelers on cruise liners docking at the new Port of Hambantota will be hoping to connect to the Southern Expressway Extension soon.

The Central Expressway Project (CEP) is as complex as it is necessary. The current road distance between Colombo and Kandy may only be approximately 115km, but due to the rugged landscape, the 1000m elevation to Kandy and traffic congestion, routine journeys seldom take less than three and half hours, often longer.

The CEP will connect these two important cities and reduce the travel time to under 90 minutes. On this new road, a bypass from Kurunegala will begin the significant development of opening the island’s northern half, starting with an Expressway to Dumbulla (Section 4).

Phrase 1 of the CEP has been divided into four stages:

Roar Media spoke to an anonymous Deputy Project Director of Stage 1 and asked him about the current status of the CEP:

“We can only talk about stage 1 of the project as that is what my office is responsible for. The contract has recently been awarded to EXIM (a Chinese Corporation) and the consultants are a local Sri Lankan company. Official business has not started as yet as the funding has not been confirmed. However, most of the preliminary design work has been completed. As of yet, we have completed 1% of the entire project.”

Crazy hairpin corners on the road to Kandy

Stage 3 has been a non-starter and is omitted on Project Details tab on the CEP website. Reports say it will one of the most expensive road developments in the country due to contentious land acquisition and the wild terrain. Taisei Corporation, a Japanese conglomerate, bid Rs. 159 billion as per the quoted price for the 32.5 km development. Whilst, another Japanese corporation, Fujita, tendered with a lower price: Rs. 147 billion (12 billion less). In September 2017, the Sri Lanka Government made a decision to allow the two Japanese companies to form a consortium to carry out the construction work.

Roar Media contacted the department to find out the latest:

“Construction [for stage 3 of the project] has not yet begun because the loan from Japanese Mitsubishi Bank has been under negotiation,” said an anonymous Deputy Director. “However, the procurement process—selection of the civil engineers and consultants—has been agreed.”

“All being well,” he continued, “construction could start in one month from now.”

Otherwise known as the Ratnapura Expressway, this newest additional to the expressway portfolio will be approximately 74km long and will stretch from Kahathuduwa to Pelmadulla via Horana. At the Kahathuduwa junction, the new road will join the existing Southern Expressway and connect to Colombo to the north and Galle in the south.

It might be a few years yet before the Ruwanpura Express is at this stage.

At this stage, its expected completion is 2021, but this has not yet been finalised and the project has not begun yet, although it was scheduled to commence in 2017.

As of June 2017 three updates on the website seemed to suggest the project was in good stead:

Roar Media spoke to  H. M. M. Wijesundara, Project Director, who said that “All of preliminary work is almost complete. The final task is to receive an Environment Impact Assessment with the CEA (Central Environmental Agency), which should happen in the next two months. Construction is delayed as the project is still open to proposal, and funding has not yet been secured.”

The importance of these expressways to the country’s social and economic development is paramount. However, as is made clear by the inconsistencies on the respective expressway websites, and the conversations Roar Media had with management, the progress is disjointed and unpredictable. Unsurprisingly, critics point to the problems of privatization; most recently highlighting the delayed loans from China.

In keeping with this discourse, it has been reported that 24 trade unions of the Road Development Authority (RDA) “demanded the government immediately drop any moves to privatise the management of the country’s expressway network”, which, at best, would severely delay progress further. Keep an eye on Roar Media for more updates.