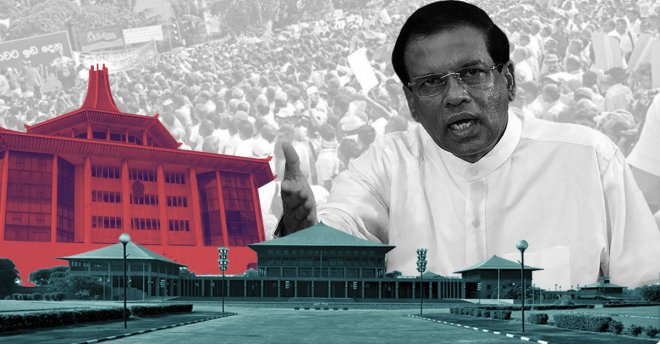 Ending days of speculation, President Maithripala Sirisena dissolved Parliament on the night of November 9th,  calling for snap elections on January 5th, no more than two days after newly-appointed Government Information Director, Nalaka Kaluwewa, issued an official statement denying what he claimed was a “rumour”, spread by an “organized group”.

It was expected, however, that President Sirisena would either dissolve Parliament or call for a referendum, when it became increasingly clear that he was unable to muster the numbers to prove a majority in the House, despite proroguing Parliament on October 27 for three weeks (until November 16), to allow his new alliance time to negotiate support.

Days of horse-trading had followed, with MPs being offered as much as Rs. 500 million to switch allegiances, but despite the pressure—and indeed, several deflections—the scales began to tip in United National Party (UNP)  leader Ranil Wickremesinghe’s favour, particularly when minority parties such as the Tamil National Alliance (TNA), the Tamil Progressive Alliance (TPA) and the Janatha Vimukthi Peramuna (JVP) pledged their support to “democracy” in the House.

This larger coalition of minority parties, which includes the Sri Lankan Muslim Congress (SLMC), the All Ceylon Makkal Congress (ACMC) and the Jathika Hela Urumaya (JHU), together with the United National Front (UNF), agreed that former President Mahinda Rajapaksa’s appointment as Prime Minister is extra-constitutional, and joined the international community in  calling for the matter to be resolved in Parliament.

Until now, the Sirisena-Rajapaksa alliance had remained resolute in their decision to delay reconvening Parliament until November 16, relenting only at the eleventh hour by issuing a Gazette notification announcing that Parliament would reconvene just two days earlier, on November 14, in partial response to mounting local and international pressure on the new government.

But as the days went by, it became apparent even to MPs and supporters of the United People’s Freedom Alliance (UPFA), that they would soon face a humiliating defeat in Parliament.

In a bid to deflect this unwelcome defeat, a hasty meeting of the UPFA chaired by President Sirisena and former President Mahinda Rajapaksa was called on the morning of November 9, where the future course of action for the party was discussed. Following the meeting,  Co-Cabinet Spokesman of the newly-appointed government, Keheliya Rambukwella, admitted to an international newswire service that the new government lacked the numbers.

As domestic and international pressure mounted, President Sirisena and former President Mahinda Rajapaksa met alone for a highly confidential meeting, during which it is assumed they discussed the options of dissolving Parliament or calling for a referendum, although no final decision was arrived at the time. The worrying problem of a clear lack of support within the House forced the two leaders to meet again that evening, where they finally decided they would dissolve Parliament.

Meanwhile, as rumours of a dissolution swilled in the public sphere, citizens gathered for protests day-after-day in the rain at the Liberty roundabout and the international community watched from afar, armed with threats of economic sanctions, senior members of the UNP attempted to facilitate a one-on-one meeting between Wickremesinghe and Rajapaksa last afternoon, in a last-ditch effort to resolve the crisis within Parliament. The desired outcome of the meeting was to ensure smooth proceedings in the House when Parliament convened on November 14.

But while Rajapaksa’s group is said to have initially responded positively to the overture, the conversation stalled after it was understood that a final decision had been made by the President to dissolve Parliament.

The President’s decision was followed by a hurried spate of late-night ministerial appointments.  Udaya Gammanpila was appointed Minister of Buddha Sasana and Religious Affairs, C. B. Rathnayake as Minister of Posts and Telecommunications, Johnston Fernando as Minister of Commerce, Consumer Affairs and Christian Affairs, M.L.A.M Hizbullah as Minister of Urban Planning and Water Supply, S.M. Chandrasena as Minister of Plantation Industries, Gamini Lokuge as Minister of Labour, Foreign Employment and Petroleum Resources and Mahinda Yapa Abeywardhana as Minister of Industries and Commerce. This was a strong indication to the watching public that the Sirisena-Rajapaksa alliance were putting in place the mechanics that would enable them to run the government, even after the dissolution of Parliament.

The UNP, the JVP, the TNA and the international community have reacted strongly to the unconstitutional dissolution of Parliament. Although the Articles cited by the Gazette do indeed give the President the powers to dissolve Parliament, they are overruled by the 19th Amendment to the Constitution, which states very clearly that ‘the President may by Proclamation, summon, prorogue and dissolve Parliament provided that the President shall not dissolve Parliament until the expiration of a period of not less than four years and six months from the date appointed for its first meeting, unless Parliament requests the President to do so by a resolution passed by not less than two-thirds of the whole number of Members (including those not present), voting in its favour.’ The current composition is not due to change til early 2020.

It is clear that in both cases—the sacking of Prime Minister Ranil Wickremesinghe and the dissolution of Parliament—President Maithrpala Sirisena and his one-time nemesis Mahinda Rajapaksa have acted in a manner contrary to the letter and spirit of the Constitution, and were made increasingly aware of the consequences of their actions. This is why, in a last ditch effort, they are appealing to the people, seeking mass approval for their government.

At the Local Government elections in February this year, the Sri Lanka Podu Jana Peramuna (SLPP), whose de facto leader is Mahinda Rajapaksa, won with a resounding majority, sending shockwaves through the national government, which had thought it enjoyed the support of the people. It is this support the Sirisena-Rajapaksa alliance will be banking on as they take to the polls in January 2019, barring any barriers that may come up if the legality of the President’s decisions is questioned by the Supreme Court. The UNP,  JVP and ACMC have indicated they will appeal to the Supreme Court seeking redress in this regard. Be that as it may, the country enters its third week of instability and uncertainty, as the battle for power between three key stakeholders heats up in the political arena.