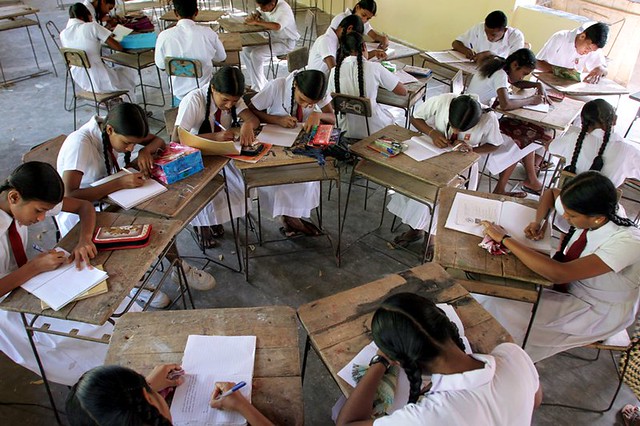 Fewer Sri Lankan Students Are Failing Their G.C.E. Exams: What Does This Mean?

After the exams are conducted, the Department of Examinations invariably conducts a survey. And the statistics show that since 2011, the number of students failing all subjects has reduced drastically.

However, in 2018, when the number of candidates increased to 296, 029, the number of those who failed all subjects reduced to 5, 917–a mere 2 percent of the whole. According to the Examinations Department, this is an all-time low.

The situation is similar when it comes to the GCE Advanced Level examination.

While it is clear the number of students failing has dropped, it is unclear what has contributed to that change, and if the decrease in failure amounts to greater higher education prospects for the students.

Commissioner-General of the Examination Department, Sanath Pujitha, told Roar Media that these positive results may be the consequence of changes made to the examination process in the last few years—the most constructive of which was to challenging subjects such as mathematics.

“Mathematics was one of the hardest subjects for the students, so a few years ago we made a few reforms to the paper,” he said.

“The Department made changes to the first and second parts of the subject [to] allow the student to obtain an ‘S’ [Simple Pass] grade from the first part of the paper. We made the paper easier for the student. We noticed that this made a huge difference in the failure rates,” he said.

Despite these changes by the Examinations Department, the Commissioner-General feels examinations in Sri Lanka still overlook the complexities of some of the subjects.

“Sri Lanka’s examination system is solely dependent on written exams and very rarely on practical aspects of the subject,” he said. “At the moment, we test a student’s practical skills only for a selected few aesthetic subjects such as music and dancing. But this is not enough,” he said, adding that he believes more students would perform better if further reforms were made.

If a student successfully passes the GCE Ordinary Level examination, they progress to the next stage, the GCE Advanced Level, where they obtain the basic qualifications necessary to apply for higher education.

But passing the GCE Advanced Level exam does not ensure students a place at state universities—many are unable to meet the high entrance requirements, calculated on the basis of a complex ‘z score’.

According to the Education Ministry’s performance report for 2013, 35.3% of the students who appeared for the 2012 GCE Ordinary Level examination were not eligible to progress to the next level because of low scores.

The problems in the sector are further complicated when students who have been the beneficiaries of 13 years of free education, plus four years of free tertiary education, find they are ill-equipped to meet the requirements of the current labour force, and expect the government to provide them with jobs.

These battles are often fought out on the streets in the form of debilitating, frequent protests by ‘unemployed graduates’, that are invariably met with forcible ejection using tear gas and water cannons as ammunition.

To address these issues, the Education Ministry recently proposed that 26 new subjects are introduced for the Advanced Level examination, to include subjects like engineering technology and bio-systems technology (that fall under the technology subject stream) and subjects like software and web development, psychology, tourism and hospitality.

The Education Ministry also observed in 2013, that if these issues are to be addressed early, books must be distributed in a timely manner, teachers must be provided with instructions manuals, and conduct rehearsal tests, and seminars for students.

The Education Department has also decided to prioritise STEM subjects and offer vocational training courses for final year students. This will allow students access to a wider variety of fields, empowering them for existing jobs in the economy.

Commissioner-General Pujitha claimed that these measures that have, or are in the process of being implemented, have contributed to reducing the numbers of students who fail their exams.

Investing in teachers is also considered of paramount importance to a healthy education system. Educators believe that in order to reform the examination structure and prepare students for the current workforce, there also needs to be an immediate improvement in teacher training facilities.

Shalini Wickramasuriya, an educational consultant, observed that standards for teacher training are not fixed in Sri Lanka, and does not benchmark best practices around the world. She pointed out that even the massive ‘Langama Paasala, Hondama Paasla’,  or Nearest School Is The Best School (NSBS) national programme embarked on by the government to address inequalities in schools, did not touch on aspects of teacher training comprehensively.

“Teacher training under the ‘Langama Paasla, Hondama Paasala’ programme, takes place on a ‘needs’ basis. It does not play an important role in the project, [but] carried out only whenever there are syllabus changes, reforms to exam papers, curriculum changes and the like. It’s not an intense programme,” she said.

The NSBS, that was rolled out in 2016, focuses on providing equal educational opportunities and facilities to all children in the country by addressing gaps in the areas of constructions and repairs, human resource development and the provision of goods and equipment.

Over 10, 000 schools in the country are covered by NSBS, and there are currently over 18, 000 individual projects being implemented at a cost of Rs. 64 billion. As many as 3, 000 schools have been provided with mobile laboratories, in addition to training for science and math teachers.

“The intention of NSBS projects is to minimise the congestion in popular schools and provide all basic facilities to the nearest school and attract students to those institutes instead of overcrowding popular schools,” Wickramasuriya pointed out.

According to Examinations Department Commissioner-General Pujitha, discussions are currently underway to further reform the examination system. “The education and examination have gone through a number of changes in the last decade or so; most of them proposed and implemented sporadically. At the moment, the Education Minister Akila Viraj Kariyawasam has appointed a committee to inquire into taking preemptive measures with regard to reducing exam pressure in students,” he told Roar Media.

But despite the reforms that have already been rolled out and the prospect of more, better, changes Wickramasuriya noted that some aspects of exams have not changed at all.

“There are several exam papers in the GCE O/L examination that exceed five hours. Who could possibly perform adequately or to the best of their ability for over five hours at the age of 16?,” she asked. You’d be hard pushed to find a comparable length of paper anywhere else in the world.”

It is clear that while the government has been successful in reducing the numbers of those that fail their GCE exams, more structural reforms are necessary to address the existing issues and create and maintain a healthy education system.