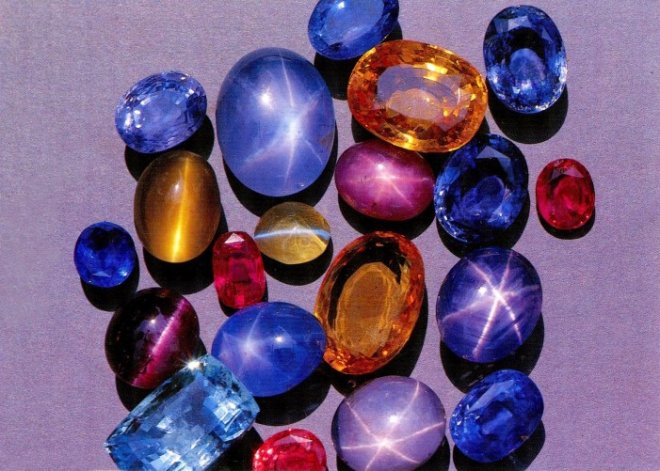 From The Mines To The Market: A Few Of Sri Lanka’s Famed Gemstones

For centuries, Sri Lanka has been famed for its high-quality gemstones, which are reputed to be some of the best in the world. In fact, there are records which show that merchants travelled from far and wide to trade goods for Sri Lankan jewels. Even in the present day and age, the island lives up to its reputation and exports various gems to different countries like Thailand, China, USA and Germany. K. L. D. Dayasagara, the Director of the Gem Testing Laboratory of the National Gem and Jewellery Authority, gave Roar Media some insight into the gems found in Sri Lankan mines.

Jewels Of Many Types And Colours

Sri Lanka has a very high density of gemstone deposits and produces over 70 of the known varieties of gemstones in the world. While some of the gemstones found here are not unique to the country, Dayasagara pointed that Sri Lanka is famous the world over for some of the finest sapphires, star sapphires and blue moonstones.

Gemology categorises all sapphires of different colours and shades under the ‘corundum’ family of gems because they have similar characteristics, like a similar chemical composition and atomic structure.

One type of sapphire which Sri Lanka is famous for is the blue sapphire. While blue sapphires can widely be found in Australia, Nigeria and Madagascar, according to Dayasagara, Sri Lankan sapphires are famous the world over for their rich colour and clarity. They can be found in a range of different shades from pale to deep blue and every shade in between.

The stones are marketed to different countries depending on their shade. For instance, there is a high demand for deep blue sapphires from China and the UK, and the demand for light blue sapphires mostly comes from Scandinavian countries like Finland.

Aside from blue sapphires, another type of sapphire which Sri Lanka is recognised for is the orange-pink sapphire. This is one of the rarest stones found in the island. In Sinhalese it is known as the padmaraga—literally ‘lotus stone’ or ‘lotus sapphire’—and gets its name from its unusual colour, which is similar to that of the petals of the lotus flower. While padmaraga is the Sinhalese name for this stone, it is popularly known as the padparadscha, the transliteration of padmaraga in the German language.

The stones get this unusual colour by the combination of two minerals: iron and chromium.

While Madagascar, too, is recognised for producing these particular stones, the Sri Lankan orange-pink sapphires have a high demand because they are stones of a good clarity.

Yellow and white sapphires are the two other types of sapphires which are widely available in Sri Lanka. The yellow sapphires can be found in various shades from pale yellow to saffron and yellow-orange. The mines of Chapleton Tea Estate in Bogawantalawa are the most famous for producing yellow sapphires. White sapphires are very clear, transparent stones which have a high demand within Sri Lanka and in the international gem market. Even though both these types of sapphire are not as rare as blue or orange-pink sapphires, they are comparatively more expensive than many other gems and fetch a high price in the market.

Centuries ago, Sri Lanka was famous for rubies. As time passed, however, the deposits of rubies in the mines have slowly diminished. These stones are rarely found here anymore, and those which are unearthed are rather small. The rubies which are found here are mostly a shade of dark pink tinged with purple.

A few years ago, Sri Lanka made the headlines when miners found the largest star sapphire in the world, the famed ‘Star of Adam’. While star sapphires are very rare stones, Sri Lanka is one of the few countries in the world which has the fortune of producing these stones. The star-like reflection in the stones is caused by certain minerals in the form of very fine needles. The effect is scientifically termed as asterism. On occasions where a deep pink or red sapphire with the asterism effect is found, it is known by gemologists as a star ruby.

Chrysoberyl is a type of water-worn pebble found in the alluvial gem gravels. It can be found in shades of olive green, golden yellow and yellow or brownish green in varying degrees of clarity from translucent to opaque. These stones can be widely found in major gemstone producing areas of Sri Lanka like Rathnapura, Deniyaya, Avissawella and Mathugama.

Some of the chrysoberyl stones display the cat's eye effect—a silvery streak of light which runs through the center of the stone—when cut by lapidarists in a certain style known as the cabochon.

Another variety of chrysoberyl known as the alexandrite. It is another rare type of gem, and Sri Lanka is recognised in the international gem market for large stones of this variety. The most interesting feature of this stone is the fact that its colour changes according to varying light intensity. In daylight the stones appear clear green, and in incandescent or artificial light they appear to be a shade of red. Those which appear a very deep shade of red under artificial lighting are considered by gemologists as stones with a higher quality.

There have also been rare occasions when alexandrite cat’s eye stones—which are a sort of hybrid stone of these two types of chrysoberyl—have been found.

The stones belonging to this family of gems are clear stones which have a slight tinge of colour. These colours include shades of blue, green, pink or yellow. There are also specimens of colourless stones which are known by gemologists as goshenite. The most popular variety of beryl in the world are the green tinged stones—better known as emeralds. Emeralds, however, cannot be found in Sri Lanka. Golden beryl and beryl of sky blue or sea green shades—known as aquamarine—are some of the more popular varieties found here.

Stones belonging to this family of gemstones are found in abundance in Sri Lanka. In fact, Sri Lanka is the second largest exporter of these gems in the world after Myanmar. Spinel can be found in many different colours and shades such as red, pink, brown, orange, purple, blue-green and a colourless variety.

Sri Lanka also has a rare variety of spinel of a deep blue colour, which is known as cobalt spinel. Because of its rarity, cobalt spinel is extremely expensive—a one carat stone can fetch up to Rs. 500,000—and it is purchased only by high-end gem collectors.

Tourmaline naturally results in a wide range of colours like yellowish green, dull green, yellow-brown and rare specimens of blue and bright green stones. Some stones can even be found in unusual colour variations which appear within the gems in concentric or horizontal bands. The yellow-brown tourmalines are the most common variety of tourmaline which can be found in Sri Lanka. These stones can be found mainly in the mines of the Uva, Rathnapura and Tissamaharama regions.

There are two types of moonstones which can be found in mines across the world: the blue moonstones and white moonstones. Sri Lanka is recognised in the international gem market for high quality blue moonstones with a pure shade of blue, not combined with any other colour. Sadly, the mines of Meetiyagoda—which are famous for producing these stones—are slowly becoming exhausted. Dayasagara said that at present these mines mostly yield small blue moonstones, which weigh roughly between one and five carats.

How Are Gemstones Classified?

“One of the frequently used tests in classifying gems is the measuring of the refractive index, which can be measured to the second decimal point and estimated to the third decimal point,” Dayasagara told Roar Media.

The refractive index is a measure of how much the light is refracted—or its direction changed—by a particular stone. The change in the direction of light depends upon the number, size and arrangement of atoms—in other words the density of the stone.

Stones are also rated according to their density and hardness on scale known as the mohs scale. According to Dayasagara, sapphires and other stones of the corundum family are given a rating of nine on the mohs scale, making them the hardest varieties of gems found in Sri Lanka. Moonstones and stones belonging to the quartz family are rated at six and seven respectively.

“Any stone which has a rating of six or more on the mohs scale is suitable to be used in jewellery because it will not be easily abraded or damaged, and can be being worn on a daily basis,” Dayasagara said. “Stones which have a lower rating—like apatite and gypsum which are rated at four on the mohs scale—need to be cut in the cabochon style, to be used in jewellery at least for a few months.”