Not a single drop of water received from rain should be allowed to escape into the sea without being utilised for human benefit—Parākramabāhu the Great.

Sri Lanka’s ancient Cascaded Tank-Village water management system, known locally by the name Ellanga Gammana, has been accepted as a Globally Important Agricultural Heritage System by the Food and Agriculture Organization (FAO) of the United Nations.

The system earmarked by the FAO is in Palugaswewa, Anuradhapura, and consists of 12 cascade systems within the Malwattu and Yan Oya river basins. But what is a Cascaded Tank-Village, or Ellanga Gammana system, and what does it do? 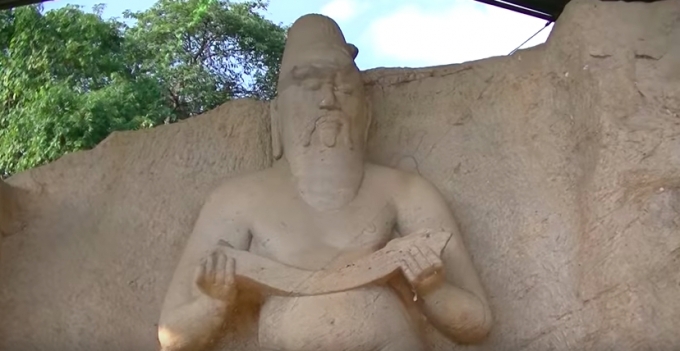 The accepted definition for Ellanga Gammana, is “a connected series of village irrigation tanks organized within a micro- (or meso-) catchment of the dry zone landscape, storing, conveying and utilizing water from an ephemeral rivulet”.

This is to say, the Ellanga Gammana system is a unique method through which water is reused and recycled through a network of small to large tanks (wewa) to efficiently manage water resources for agricultural and domestic use in the dry zone.

The Ellanga Gammana system, developed by farming communities over two millennia, controls seasonal flooding and droughts to ensure the continuous cultivation of paddy during both the rainy and dry seasons in the dry zone. The Ellanga Gammana or Cascaded Tank-Village recycles and reuses water through a network of small to large tanks. Image ucnsrilanka.org

The Ellanga Gammana system is made up of four distinct zones which each contain several elements. The four zones are (i) tank bund and tank bed (ii) associated irrigation channels and paddy fields (iii) protected forest in the catchment and rainfed uplands and (iv) hamlet (gangoda) or high elevation household area.

Elements contained in the first zone are:

In the second zone are included:

In the third zone is the godawala (waterhole), while in the fourth zone is the gangoda (hamlet) and thibambe (hamlet buffer).

Each of these zones and elements play an important role in the function of an Ellanga Gammana system.

The earliest known medium-scale irrigation tank, the Basavakkulama, was built in Anuradhapura around 300 BC,  and there are today about 30,000 tanks built in a land area of 40,000 km2 in the dry zone.

While tank construction peaked from around the middle of the 12th century, especially under the rule of King Parākramabāhu I (credited with making the policy statement “Not a single drop of water received from rain should be allowed to escape into the sea without being utilised for human benefit” during his rule), a “dark age of tank civilization” began around the middle of the 13th century and continued up to the arrival of the British in the 18th century.

The reasons for this “dark age of tank civilization” remains unknown, with scholars like C. M. Madduma Bandara, offering  in ‘Village Tank Cascade Systems of Sri Lanka’, that “Some attribute it to foreign invasions, butothers to malaria, climate change, depletion of soil fertility, and even to a combination of factors and a “pulland push” mechanism that eventually attracted the people to the wet zone and the hill country”.

It is also pointed out that Cascaded Tank-Village systems, in the pre-colonial era, were managed through the custom of compulsory labor, or rajakariya. But with this system losing favour with the British in 1832 AD, an alternative maintenance scheme for the compulsory labor was not introduced resulting in the gradual abandonment of Ellanga Gammana. Ellanga Gammana sustains a variety of ecosystems in the dry zone of the North Central province. Image courtesy youtube.com

In recent times, however, the government of Sri Lanka, together with international and farmer organisations, have undertaken projects to develop the tanks and manage water in the dry zone—in fact, the government is currently in the process of preparing a “master plan” for the conservation and development of the Ellanga Gammana system.

In having the Food and Agriculture Organization of the United Nations recognise the Ellanga Gammana system as a Globally Important Agricultural Heritage System (Sri Lanka submitted the proposal last year), Sri Lanka has taken an important step in furthering the conservation and preservation of this ancient water management system that, to date, sustains a variety of ecosystems in the dry zone in the North Central province of the country.

Cover: There are over 3,000 tanks in the dry zone of Sri Lanka. Image courtesy youtube.come