The morning of February 10  dawned like any other, but for a group of men and their acolytes, the day heralded the busiest 24 hours of their lives. Elections Commissioner Mahinda Deshapriya and his team of officers at the Election Secretariat readied themselves for a day of intense pressure, as Sri Lanka took to the polls to vote in the Local Government elections.

For Deshapriya, preparations for the Local Government elections began much earlier, when, as per Section 25 of the Local Authorities Elections Ordinance, ‘nominations notices’ were published by Returning Officers. A ‘nominations notice’ contains all information relating to the period of nomination, number of candidates to be nominated, the number and/or symbols for each group, etc. 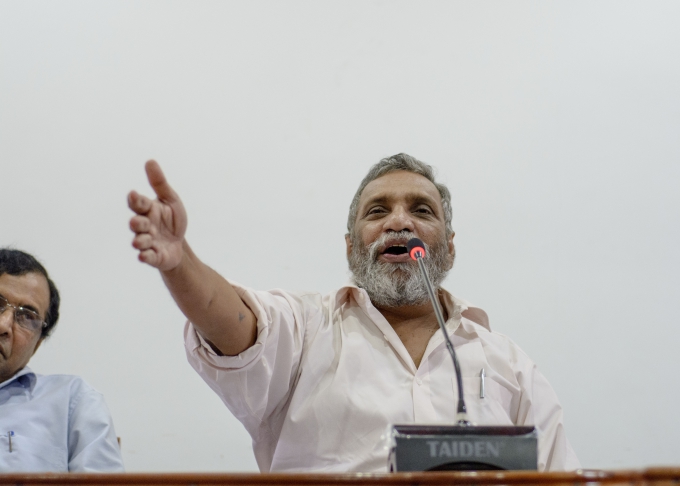 In the meanwhile, Elections Commissioner Mahinda Deshapriya said that the Elections Secretariat begins working closely with the Government Printers to print ballot papers, household notices (which inform voters about contesting candidates) and the ‘Elections Notice’—to be published in the Gazette—that contains information relating to each local authority.

Deshapriya and his team next begin the task of executing postal votes, in accordance with Local Authorities Election Act No. 24 of 1987. Postal voting facilities are provided for officers and employees of the public sector and security forces who are unable to cast their vote at polling station due to work they are entrusted with during that period.

There are several other matters that Deshapriya and his team must coordinate, which include the appointment of polling agents; two agents can be appointed by each recognized political party to be allowed to stay inside the polling station on the day of the election for observation, as well as coordinating with Police for security. Two days before the election, ballot boxes are sent to the issue point, Deshapriya said. In Colombo, these are the D.S Senanayake College and Royal College, while in other districts,  premises of equal significance are used. It is from this ‘issue point’ that ballot boxes and papers are issued to polling stations that are typically housed in public schools or temple premises.

On the day of the election, Deshapriya and his team arrive at the Elections Secretariat early. Polling begins at 7 am and ends at 4 pm, and much of Deshapriya’s time is spent putting out flames. ‘I’ll get a call from one place, not enough ballot papers, I’ll get a call from the next place, someone hasn’t been allowed to vote and is appealing to me, the calls are endless but we deal with all of them,” he explained.

Deshapriya has, in fact, set up a Complaints Centre at the Elections Secretariat to handle these issues in particular. An overwhelming amount of complaints are made that employees are not being allowed to leave work to vote, Deshapriya said. In these cases, the team working with Deshapriya sets to work, calling the HR management, urging them to grant their employees leave to vote.

“We try to push the point that it is everyone’s right to vote,’, Deshapriya said, explaining that although an employee was liable, under Section 84A of the Local Authorities Elections Ordinance to grant leave for votes, written complaint was needed to take action against the difficult employer—a matter not easily rectified given time constraints and the employees’ fear of losing jobs. “If these people press the point they will be asked to go home, so we appeal to the HR management to give them the freedom to exercise their rights.” Election results are typically announced ward-wise, between 8 pm and 12 midnight by the Returning Officers. However, there can be delays, Deshapriya said, explaining that in some cases there is a failure with software, in other cases results have to be recounted in certain wards.

The results are finally announced to the media, by which means the general public learns which candidates won in their local authority. But work doesn’t end there for Deshapriya and his team at the Elections Secretariat. In the aftermath of the election, parties dissatisfied with the results of an electorate often demand a recount.

Post-election elation and violence are also not to be ruled out. Deshapriya said police presence remains at the Elections Secretariat till well after the election is concluded. Furthermore, petitions can be filed at the Court of Appeal and the Provincial High Court by parties not satisfied with the results of the election, leading to protracted issues.

However, Deshapriya, a veteran, takes it all in his stride. A jovial man, his easy manner, and good-natured banter hide a sharp mind and the ability to withstand enormous pressures. Able to take control of any trying situation, Deshapriya steers the most important exercise of franchise with seeming ease. “We are very happy this election was free, fair, credible, and transparent,” Deshapriya said of the February 10 LG polls.