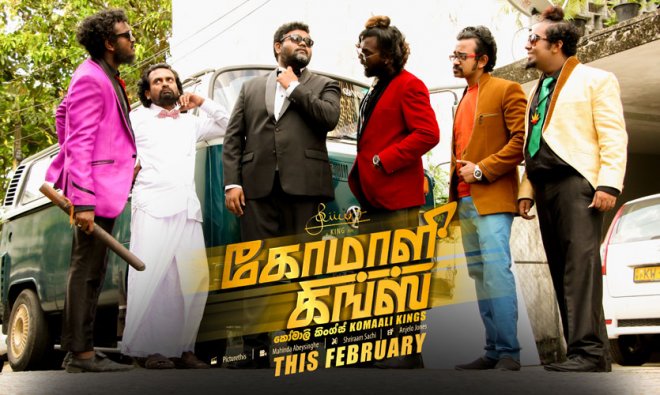 When was the last time you heard of a Sri Lankan Tamil movie? Never? You may have heard or seen Ini Avan (2012), written and directed by Asoka Handagama, which had a limited release, but there hasn’t been a Sri Lankan-made Tamil language film with an island-wide release in 40 years. Until now.

Komaali Kings is a film made entirely with a Sri Lankan cast and crew and has been on over 50 screens nationwide since 23 February, hopefully helping spark a new chapter in Sri Lankan cinema.

In 70 years of Sri Lankan cinema, we’ve had legendary Tamil names in Sinhala movies. For example Kadawunu Poronduwa (The Broken Promise), the first Sinhala speaking movie, was directed by S. M. Nayagam. He went on to direct other early hits such as Mathalan and Ahankara Sthree (The Arrogant Woman). M.S. Anandan was the cinematographer for Golu Hadawatha (The Silent Heart) and Lester James Peiris’ acclaimed masterpiece Nidhanaya (The Treasure), which to this day is hailed as the best film ever made in Sri Lanka. Musicians like R. Muttusamy Master and M. K. Rocksami were instrumental in creating the songs of early Sinhala cinema. Songs that gave the spotlight to beloved playback singers like Latha Walpola, Mohideen Baig, J. A. Milton Perera, H. R. Jothipala, Angeline Gunatillake and many others.

Samuthayam (Society) from 1962 was the first Sri Lankan Tamil film. It was an adaptation of the film Velaikkari from 1949. Produced and directed by Henry Chandrawansa, the film was intended to be a 35mm film, but financial difficulties forced it to be filmed in 16mm. Financial difficulties plagued the film from start to finish. The actors were forced to raise money by asking for donations from the public. Then theatres wouldn’t screen the film. Finally a special arrangement allowed it to be screened at the Borella YMBA hall, after which it toured the country and then Ceylon Theatres exhibited it in 1963 at the Manel Theatre in Dematagoda.

A notable success was Komaligal (Clowns) in 1976. This film is a remake of Komaligalin Kummalam, a popular radio drama broadcast on Radio Ceylon in the mid 1970s, and featured famous faces such as S. “Marikkar” Ramdas, B. H. Abdul Hameed, and Kamalini Selvarajan among others.

Vadaikkattru (North Wind) is based on a Sri Lankan Tamil novel by renowned author Sengai Aaliyan. The screenplay is written by Sempiyanselvan and directed by Premnath Moraes. It is about the tensions between migratory and indigenous fishermen. Veteran actor K. S. Balachandran said of the film; “When I first read Vaadai Katru as a novel, “Viruththasalam” is the character which impressed me the most… After considering actors like Gamini Fonseka for this character, they  finally selected me. It was a pleasant surprise for me!”

Ponmani (Younger Sister) was directed by Sinhalese director Dharmasena Pathiraja. It was an attempt to show a closer look at the people of the Jaffna peninsula and the socio-economic problems they face. While well received as a film, some criticised it as an inaccurate outsider’s perspective.

The second was the arrival of television and the video cassette. Now bigger Indian Tamil movies could be seen at home, so why go to the cinema for a local production with a lower budget? Thirdly, and most importantly, the 1983 violence and the subsequent conflict in the country. Cultural activities understandably took a backseat as people’s lives were now at stake.

It is against this backdrop that Komaali Kings marks a return of Tamil cinema in Sri Lanka.

Komaali Kings is a black comedy written and directed by King Ratnam. He is the grandson of the famed stage, radio and film artist M. S. Ratnam. His brother Jude Ratnam recently came to some acclaim as the director of the documentary Demons in Paradise. Ratnam said that the story is inspired by the aforementioned Komaligal (1976), and a quote by Charlie Chaplin: “Life is a tragedy when seen in close-up, but a comedy in long-shot”.

Ratnam told Roar Media that it was very difficult to get the project off the ground.

“Yes. Everything has been [difficult], because it’s not been done before, right? So people are scared. Releasing this movie on par with Indian movies has been a challenge…You get this a lot because it’s a local movie. People say ‘so what, what, what have you done?’. Until we got a preview ready. It had to cross a lot of red tape.”

After this, he started working on two short films which were black comedies: Sugar Up Down and Devil Come Devil Go, which is when he realised he had a talent for the genre. Then he started on Komaali Kings. The challenge facing him was to make a local film that was at least on par with the South Indian films that are so popular. He didn’t hire any actors or technicians from India. The only Indian connection is that the sound mixing had to be done in India.

Ratnam makes it clear that while it is a Tamil film in language, it’s more akin to a national film because the film speaks in so many dialects. According to Ratnam, the film incorporates six different dialects of Tamil spoken in Sri Lanka: Jaffna Tamil, Colombo Tamil, Batticaloa Tamil, Upcountry Tamil and the dialect spoken by the Muslims, as well as Sinhalese and English.In fact, the aforementioned movie Komaligal was the inspiration.

“What inspired me was these dialects they had used,” Ratnam said. “They had used many Tamil dialects in the film, and that seemed to have touched many, many communities in Sri Lanka. So I thought I should take that further.”

However, the film comes from a place close to Charlie Chaplin.“Another inspiration for me was this Charlie Chaplin quote… He says life is a tragedy in close up, but a comedy in long-shot. That was apt for me personally, and also I thought, for the lives of my people. Even though the Tamil community has been through so much turmoil and blood and sweat, and not just them, the entire Sri Lanka, I thought that somebody should look at that from a bigger picture and maybe create a mirror, to laugh at ourselves as a community.”

King Ratnam himself stars as the lead role of Pat. The rest of the cast include Dharshen Dharmaraj and Niranjani Shanmugaraja, who were lauded for their roles in Asoka Handagama’s limited-release Tamil language film Ini Avan in 2014, as well as Kalabooshan Raja Ganeshan, Priyantha Sirikumara, Gajan Kaneshan and Sathyapriya Ratnasamy.

Siva Sithambram is your average next-door guy with boring life. Suddenly his distant relative Pat and his family from London come to stay with him while they are in Sri Lanka for a wedding. Siva has high expectations of this high flying rich London relative solving his problems of money, an unmarried daughter, and a nagging wife. But what he doesn’t know is that Pat’s family is not at all what it looks like from the outside. Things turn to hilarity as desperate people try outrageous things to find a way out of their miserable, mundane lives.

The first thing you’ll notice is that Komaali Kings is remarkably well shot, with some excellent cinematography right from the start. While the flamboyance of the opening titles may lead you think this is another South Indian production, once the movie starts its Sri Lankan DNA becomes abundantly clear.

When you get to points where multiple characters interact, you can see the seamless integration between characters from different communities, especially between their languages as the switch between dialects and languages without breaking the flow. This, arguably,makes the film feel more like a Sri Lankan film that is in Tamil because it happens to be about a Tamil family, rather than a “Tamil language movie” per se. It was an accurate, albeit somewhat caricatured, take on some of Colombo’s mixed communities.

This happens to be the only major criticism of the film. That some characters seem based on stereotypes and tropes. Apart from that, the flow of the story can be unusual in certain places. Some of the more serious points of the film can be sudden and unexpected. You were laughing to tears, and suddenly you’re in tears for a completely differently reason in the very next line of the same scene.

Other than that minor gripe, the film is fantastic. It’s very relatable and that makes it even more funny. You will recognise every person you see on screen as someone you would have met in your day to day routine. Ratnam’s script paints a picture of the humor in the drab, everyday life of the every man, even as the more absurd events take over. It celebrates simple pleasures, as much as it takes a serious look at things like identity, economic woes, and societal expectations.