The recent spate of violence against Muslims in the Kandy-Digana areas catapulted the country into a state of emergency. The country it seemed, was enveloped in fear and hate—which is when people from the Sinhala community not just condemned the violence, but also went out and actively protected their brethren.

We think it is important to highlight acts of solidarity during these trying times, just as much as it is to report otherwise.

The Monks Who Stood Against The Mobs 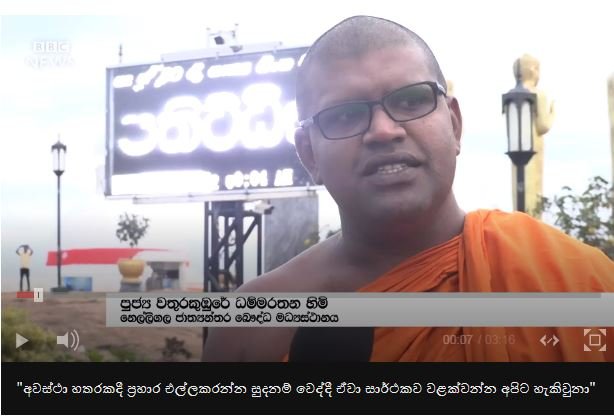 Wathurakumbure Dharmarathne thero mobilised youth in the area to stand up against the rioters. Image courtesy: bbc.com/sinhala

When news of the riots spread from Digana and escalated from there, the monks at the Nelligama Buddhist Centre immediately planned to take action. On Tuesday night (06) the founder of the Centre, Wathurakumbure Dharmarathne thero and other monks in the centre sought assistance from the youth of the area and assigned themselves the task of protecting the Muslims in the area.

“We learnt that organised groups were planning to attack our village. So we stood on guard throughout the night until Wednesday morning, and warded off those who came. We were able to circumvent four attacks, and also preached about the wrongs of what they [the attackers] were doing,” the monk told BBC Sinhala.

He added that no harm came to the 14 or 15 mosques in the villages in the area.

Friday prayers were peaceful following a night of unrest in Digana, as the Sinhala community members helped their neighbours in setting up the prayer area. Image credit: twitter.com/azzamameen

As the Jummah mosque in Digana was burnt down, Muslims in the area conducted Friday prayers in a school ground. The Sinhala community in the neighbourhood assisted them in arranging the grounds for prayer.

Likewise, the Ratmalana Jummah mosque was visited by monks from five different temples in the area to promote coexistence and harmony.

Reports also emerged of monks in Avissawella and Gelioya visiting mosques during prayer time to offer protection against racist elements. 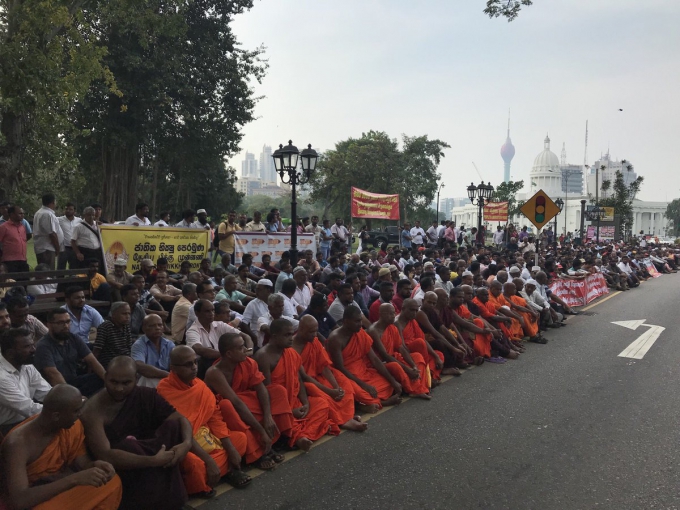 “To my fellow Sri Lankans, Have we not learned anything from our past? Have we lost sight of basic human decency and love? Are we morally corrupted that we cannot see our mindless acts are endangering our common future? We are responsible for the safety and well being of our neighbours. We are our sisters’ keepers. We are our brothers’ keepers. We have to make sure that in Sri Lanka anyone and everyone feels safe, loved and accepted regardless of ethnicity or religion.”    – Kumar Sangakkara.

Cricketers Mahela Jayawardena, Kumar Sangakkara, and Sanath Jayasuriya all condemned the attacks via tweets and short video posts, and demanded an end to the violence.

Meanwhile, civil and political groups launched anti-racism protests. Civil organisations under the banner ‘Puravasi Balaya’ (power of the people) protested in front of the Fort Railway Station last Thursday (08). On Friday (09) the People’s Liberation Front and the National Bhikku Front both gathered for the JVP-organised anti-racism protest at the Vihara Maha Devi Park.

The silent protest organised by the Buddhist monks said they were protesting against “communal clashes destroying national unity.” 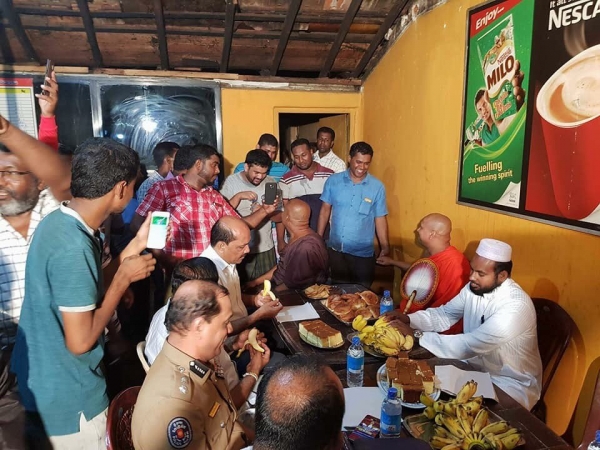 The hotel was rebuilt within a day thanks to the efforts of the local Sinhala community. Image courtesy: asianmirror.lk

A small ‘hotel’ owned by a Muslim businessman in Anamaduwa was torched down in the early hours of Sunday (11). However, it was back in business 18 hours later, as the local traders’ association and nearly 300 volunteers rebuilt it within 12 hours. Most of those who helped repair the eatery were from the Sinhala community.