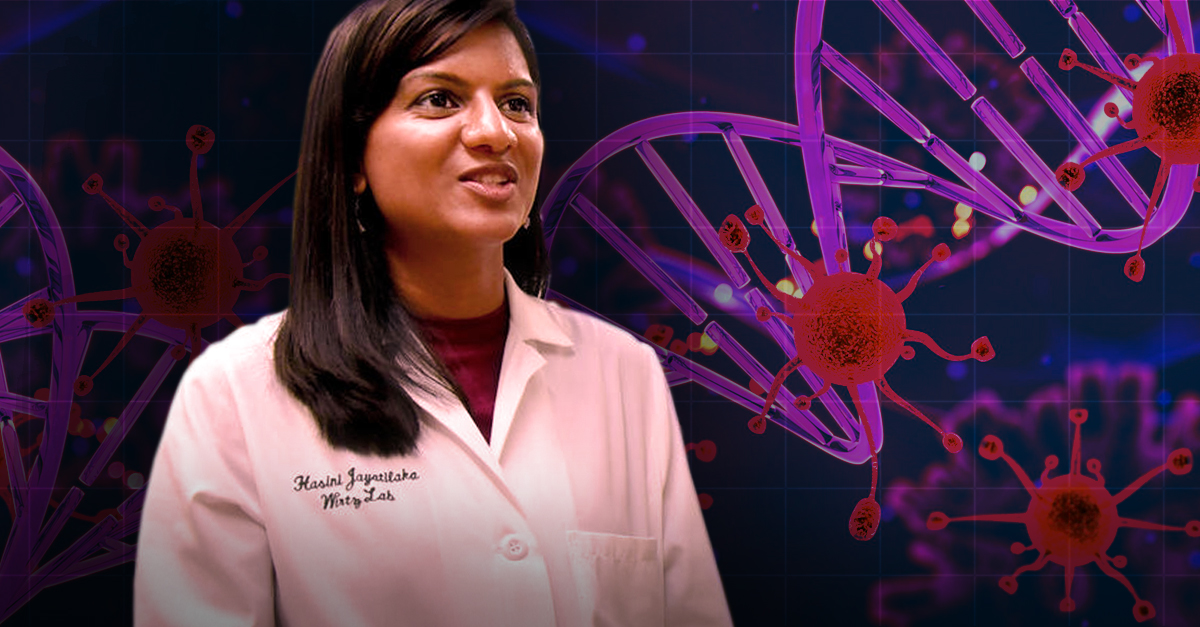 In 2014, cancer was the cause of 10% of deaths in Sri Lanka. Medical researchers and oncologists have been aware of, and battling the disease, since circa 1600 BCE, but an elusive ‘cure for cancer’ has remained frustratingly out of reach. Most treatments for the condition—especially for patients at later stages—revolve around a combination of radiation and chemotherapy.

These treatments are well known for the collateral damage and long-term side effects they cause, such as hair loss and infertility. According to Zahara Rahim*, who was diagnosed with breast cancer in 2010, “One of the leftovers from the chemo is I don’t eat anything spicy: cinnamon, cloves — if there’s too much in my food I can’t eat it, because my mouth is too sensitive.”

While cancer continues to affect the lives of one in three of us, research into newer treatments has been stymied by the condition’s evasive nature. Its widespread presence contrasts with just how little we understand it, and for many it is the mystery that shrouds the disease—what causes it, and what curtails it—that contributes to the trepidation surrounding it.

The good news is that there is promising research being done into targeting cancer more accurately, and making life-saving treatments like chemotherapy less arduous on the body. One scientist who is at the forefront of such trail-blazing research is Hasini Jayatilaka, a 28-year-old Sri Lankan who was recently featured on Forbes’ 30 Under 30 list for 2019 for discovering a signalling pathway that cancer cells use to communicate. Understanding this process has helped cancer researchers develop cocktails of drugs that work to inhibit tumour spread. These cocktails, still in preclinical trials, might reshape how we approach cancer treatment in the future, and this research is a step towards understanding how an age-old affliction dismantles a body from the inside.

Two years into her undergraduate degree in chemical and biomolecular engineering on the American east coast, Jayatilaka was tracking how cancer cells move in three dimensions. In the lab at Johns Hopkins University (JHU), she noticed that when cells got too close together, they would detach from the main tumour and spread.

On the back of a seminar on molecular biology, Jayatilaka had an idea that could explain this behaviour. The seminar was on how bacteria ‘talk’—a revolutionary idea in its own right—and the visiting lecturer found that the bacteria would communicate with each other based on their population density.

The link to Jayatilaka’s own observations was refreshingly straightforward: what if cancer cells communicated in the same way? She checked the literature and didn’t find anyone making a similar claim, and started formulating her hypothesis. What Jayatilaka, a 20-year-old at the time, didn’t know was that this idea would, almost a decade later, make waves in the field of cancer research.

And so, after years of copious research, Jayatilaka and her team at JHU discovered two biological molecules that  drive communication between cancerous cells. The signalling pathway these molecules create—dubbed the ‘Hasini effect’—was unknown to researchers at the time, and its discovery presented new insight into a disease that has remained a mystery for millenia.

Cancer is the uncontrolled proliferation of cells — they grow and cannot be controlled. “Cell division is kept on a tight leash in the body,” Jayatilaka explained. “But with cancer, there is a mutation that causes these control mechanisms to fail: the cells just start dividing like crazy, and it becomes very aggressive, using up nutrition in the body and taking it away from vital organs.”

The ability for cancer cells to divide and invade surrounding tissue, and move to other parts of the body is one of the condition’s defining characteristics; it is a key difference between malignant or cancerous tumours and benign ones. This spread is medically known as ‘metastasis’. According to Jayatilaka, it is responsible for mortality in 90% of cancer patients.  “A female patient with breast cancer doesn’t succumb to the disease simply because she has a mass on her breast — she succumbs to the disease because it spreads to her lungs, liver, lymph nodes, brain, or bones, where it becomes unresectable and untreatable,” she explained.

Jayatilaka said that the spread of cancer is traditionally thought of as a byproduct of tumour growth. “From this perspective, if we can stop a tumour from growing, we can stop it from spreading,” she said. Jayatilaka and her team diverged from this orthodox approach; their novel perspective, which separates the spread and growth of a tumour as two distinct processes, focuses on metastasis in its own right.

This led them to the discovery of two interleukins—molecules that regulate immune response—which were being used for communication amongst cancer cells. This signalling pathway they found—facilitated by Interleukins 6 and 8—helps cancer cells move around the body quickly and effectively. “Cancer cells tended to move faster and further away when clumped together,” Jayatilaka remarked. “[The two molecules] were responsible for enhancing cell migration based on an increase in local tumour cell density.”

Blocking the communication channel helped slow this spread and Jayatilaka and her team worked on a drug cocktail to do precisely this. It was this new type of cancer treatment that specifically targeted metastasis, without any effect on tumour growth, that earned a place in Nature, the prestigious multidisciplinary science journal, and put Jayatilaka in the limelight amongst the medical community.

Hers was a breakthrough for understanding and potentially developing new treatments for highly metastatic tumours, like ovarian or pancreatic cancers, but it also had implications for cancer treatment in general. “I developed an interest in studying relapse, as current cancer treatments ultimately fail owing to metastasis and relapse,” Jayatilaka said. As such, understanding metastasis and medically slowing it down is important not only as a new method of treating the disease, but also as a supplementary treatment to tackling it. “The idea behind the treatment was to use it in unison with traditional treatments,” she explained. “Stopping the spread isn’t enough.”

At the Stanford University School of Medicine, Jayatilaka now studies neuroblastoma in children.“Neuroblastoma is one of the more prevalent solid tumours in children,” she told Roar Media. “But over the past ten years or so, we haven’t really made advances.” Jayatilaka borrows from her work in treating leukaemia by using immunotherapy—a method that uses a patient’s own immune system to tackle cancer—to try to avoid the collateral damage of orthodox radiation and chemotherapies on young children.

From Stafford To Stanford

Despite having not been born on the island, Jayatilaka considers herself a Sri Lankan through and through. From montessori at St. Bridget’s Convent to A-Levels at Stafford International, it was in Colombo that the biomolecular engineer began her academic career — although it wasn’t immediately clear that a future in research was what lay ahead. “When I was around 15 or 16, I wanted to be a race car driver,” she said. “My goal was never to be a cancer researcher—it was just the trajectory my career sent me on.”

Jayatilaka, who has lived in the States for the past nine years, says she had never planned to move there. “But it ended up being one of the greatest experiences of my life,” she said. Jayatilaka’s experiences parallel those of many aspiring Sri Lankan researchers, who feel academia on the island is too restricted to get ahead on an international stage. “I did feel a little out of my element at school,” she said. “I was too ambitious.”

Funding is a huge barrier to world-class research being done locally, even though there is no shortage of talent. “While I’ve met some researchers from Sri Lanka who do cancer work, there isn’t really the infrastructure to do the research,” Jayatilaka said. “The work I do is very expensive — I need resources, a lab, and funding.”

“Right now, I don’t think there is space for me to come back [to Sri Lanka] and do research, although I’d love to do teaching or mentoring. I’ve given talks and lectures at Colombo and Moratuwa University,” she said.

The scientist cites the freedom to pursue her ideas at university as contributing to her success. “My professor at JHU recognised my strengths and weaknesses, and played around them,” she said. “I felt I could create my own mould and still be successful.”

Despite being almost a decade in the works, the ‘Hasini effect’ and treatments of it are still in preclinical trials. “It took years and years for me (almost eight), as well as a lot of work to get here,” Jayatilaka said. “Success doesn’t happen overnight.”

Researching for a PhD and securing a post-doctorate were also very stressful periods for her. “Being in academia is tough in its own way. It will challenge you mentally, physically, and emotionally in every single way,” she said. “It’s a lot of hard work and dedication, and a lot of people just see the results. You have to make up your mind and commit to it.”

But science as a collaborative field is what makes it so effective, and pertinent in its predictions. “My favourite part of [research] is the fact that I get to work with a diverse group of people, who make my work stronger, better and just so much more fun,” she said. “My work shows that even cancer cells use collaboration to invade our bodies and spread their wrath — and I am confident that with the right collaborations, we will beat this terrible disease.”