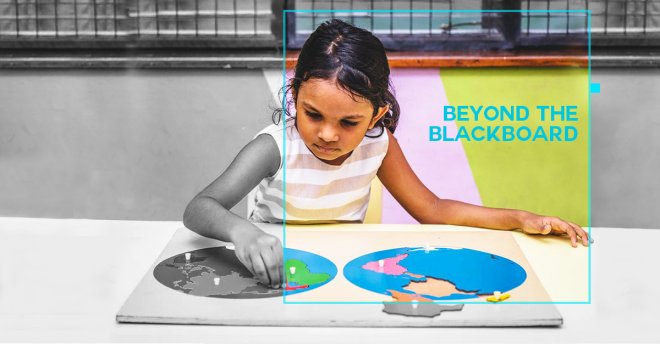 Beyond The Blackboard: Is Montessori A Viable Alternative To The Mainstream?

Over half a century ago, in 1944, Italian physician Dr. Maria Montessori arrived in Sri Lanka with her son Mario Montessori to conduct a series of classes on an alternative education system. And although the term ‘montessori’ is used liberally today, it refers to that very specific system of alternate education that Montessori developed for pre-school children in the early 20th Century.

In the 75 years since the Montessori method was introduced to Sri Lanka, scores of pre-schools following the system have come up, receiving training through the official Association Montessori Internationale (AMI) centre—the only certified centre in the island—housed at St. Bridget’s Convent, in Colombo 7.

Sister Stanislaus Vas has been at the helm of the Good Shepherd AMI Training Centre as directress since 1994.  According to her, the beauty of the Montessori method is that it instils an innate curiosity in the mind of the child. “The children are free to learn about the world on their own terms, and they are motivated, not by rewards or punishment, but by what they are interested in,” she told Roar Media.

As Montessori herself once stated, “He who accomplishes a truly human work, he who does something really great and victorious, is never spurred to his task by those trifling attractions called by the name of ‘prizes’ nor by the fear of those petty ills which we call ‘punishments’.”

Characteristics Of The Montessori Method

In classrooms that adopt the Montessori method, students are allowed to move around freely and use teaching tools they are familiar with. Known as ‘development materials’, these tools illustrate different concepts in very physical ways. The teachers instruct the children on how to use those materials in a manner appropriate to their knowledge and abilities.

For the youngest group, the materials are very focused around the senses — exposing them to sights, sounds, smells, and tactile experiences. A collection of blocks of different weights to be matched correctly by the children, cards of different colour gradients, cylinders filled with powders that also make different noises when shaken, and slabs and fabrics of different sizes and textures are some of the tools that Montessori students use.

At this level, the method also emphasises practical skills, such as sweeping, pouring water from a jug, carrying a chair, polishing shoes and other such daily chores. “For the older children, the materials get more complex, as we begin teaching them more specific subjects, ” Sister Vas said. This includes languages, maths, geography, botany and zoology.  Even these subjects utilise practical tools such as stencils to trace letters before writing them, models of geographic features—such as bays, islands and peninsulas—into which children can pour water to recreate water bodies, or world maps in which countries can be fitted in place like pieces in a puzzle. The materials are supported by a theoretical framework which follows the development stages of the child. In different children, teachers have to recognise the development stage, their natural tendencies and interests, and identify the best time to introduce the appropriate materials and concepts.

Sister Vas explained that the Montessori method is more than learning through materials. According to her, it is also a “way of life” that shows teachers how to interact with a child in the best possible way. “It’s important to treat the child with due respect, as you would treat any other person, with simple things like saying ‘please’ when asking for things, or explaining why things are done a certain way,” she said. She pointed out how, often unintentionally, a teacher or parent would give children instructions that are very negative. “Don’t sit like that, don’t touch that, don’t pull that, don’t do that,” she said. “But our approach is much more positive because we tell them ‘this is how we do it or we do it like this.’”

She also explained that the objective of the Montessori method is to direct the child’s innate curiosity in a productive way. “Children have the natural tendency [to be adventurous],” she said. “That is why a child will pull things they aren’t supposed to, or try to touch fire, or lick the floor and the walls — he or she just wants to know what it tastes like.” The Montessori method allows the child to explore what she wants to explore and learn what she wants to learn. “We give them the keys to unlock the world,” she said. “Our approach is not one of teaching, always helping, directing and guiding. We only have to begin giving, and we find that the child does the rest.”

The History Of The Montessori Method

Dr. Maria Montessori was born on August 31, 1870, in Chiaravalle, Italy, to an educated, middle-class family. Although her parents wanted her to be a teacher, she found herself drawn to a variety of other subjects. Ultimately she decided to pursue a career in medicine, a controversial choice for a woman at the time. Once she graduated with a medical degree from the University of Rome in 1896, Montessori began working with mentally ill patients in the city’s asylums. Observations she made during this time would be very influential in the method she later developed for children. “For instance, she noticed that after lunchtime, many of the patients, both children and adults, would play with the breadcrumbs left on the tables, throwing them back and forth,” Sister Vas said. “She thought, ‘If only they had something in their hands which was constructive'.’”

In 1899, the National League for the Protection of Retarded Children, an organisation committed to improving the lives of children and adults with mental disorders, put Montessori in charge of the Scuola Magistrale Ortofrenica, an institute for training teachers in educating mentally disabled children. Many children attending this school, who were previously considered ‘uneducable’ due to their learning difficulties, would go on to pass public examinations. “They were slower at learning, but once they had learned, they performed just as well, and sometimes even better than other children,” Sister Vas said. “The methods and materials Montessori developed here, she would later adapt for use with mainstream children.”

The impetus for Montessori’s first school, Casa dei Bambini (House of Children), came from the landlord of a block of low-income tenements in the San Lorenzo district of Rome. “During the day, the parents would go out to work, the older children would go to school, but the younger children below five years were left at home to run amok in the building, destroying windows and vandalising the walls,” Sister Vas said. “The landlord was mainly concerned about his property and invited Dr. Montessori to try and control the unruly children. She accepted, because she wanted to try out her methods on normal children.”

“She began by using the development materials she had made for the mentally challenged children and showing the new children how to use them,” Sister Vas said. “She kept the materials they engaged with, and what they didn’t use even after repeated instruction, she discarded.” Montessori realised that given free choice, the children showed more interest in practical activities and her own materials than in the toys provided for them. “One night, the teachers forgot to lock the cupboards, but when they returned the next morning, they found that the children weren’t misusing them. They were simply using the materials as they were meant to,” said Sister Vas. “From then on she told the teachers to leave the cupboards open, and emphasised the freedom of activity driven by the child’s own tendencies.”

In 1909, following the success of her school, she published a book outlining her educational philosophy. She followed this with her first training course for teachers. The method became popular in Italy, and also began to attract attention internationally.

The Method Comes To Sri Lanka

In India, there had been an interest in the Montessori method from its very early stages. Indian teachers had travelled to Rome to attend Montessori’s lectures, and many saw the method as the best way to educate India’s poor. In 1939, Montessori and her son were invited to Madras by the Theosophical Society to conduct a series of lectures at local universities. Although Montessori had intended to return to Europe at the end of her session in India, the outbreak of World War II forced her to stay back.

During this time, a Sri Lankan teacher, Joyce Goonesekera, who was in Kodaikanal, India, to study under Montessori, saw the advantages of her educational system. In 1944, the Montessoris were invited to Sri Lanka by the Ceylon Teachers’ Association to conduct a training course on the Montessori method. Goonesekera assisted Montessori and her son to conduct sessions at the Good Shepherd Convent in Kotahena, with the participation of about 300 teachers, parents and other interested parties. The audience also included nuns who went on to open ‘Houses of Children’ in convents in different parts of the island. Until 1964, the training courses were only conducted in English. Sister Vas requested a Sinhalese translation of Montessori’s book, and began the first ever course in Sinhala with just 14 students. Today, there are schools using all three languages, including special materials to teach children the Sinhalese and Tamil scripts.

The Efficacy Of The Montessori Method

While Montessori and others expanded the method for children up to 18 years of age, in Sri Lanka, there are only Montessori schools for ages 2-6, after which most children enter the mainstream school system. These schools, both public and international, are extremely competitive. Progress is measured using exam performance, and students are ranked according to their results.

Some educators fear that allowing the child so much independence at an early age could make working in collaboration and as teams harder. However, a study which compared the readiness of Montessori-trained and non-Montessori children when entering primary school, found that they were roughly equal when it came to social skills. It also showed a marked improvement among Montessori children in terms of concentration and focus.

One change that parents notice when children transition from a Montessori to a traditional school is their relationship with their teachers. This is apparent in the way students get their teacher’s attention. A common Montessori practice is to have a child silently place their hand on the teacher’s shoulder to request attention. The action requires the child to walk over to the teacher (rather than remain seated with a raised hand), to touch the teacher without interrupting an ongoing conversation, and to wait until the teacher can conclude their current task before being acknowledged.

Although it is a means of keeping noise levels low while managing interruptions, it also teaches the child the virtue of patience, and the value of respect, both for the needs of others and for work itself. Even though the child probably does not understand these factors, it builds a connection with the teacher that stands in stark contrast to the large, impersonal classrooms in most mainstream schools.

However, different Montessori schools vary in the degree to which they adhere to the traditional elements of the method. Where some insist on a strict interpretation of Montessori’s writings, others favour a more liberal treatment, allowing innovation and greater involvement with non-Montessori approaches to education.

In Sri Lanka, 75 years after its introduction, the Montessori method remains popular. “We get about 80 students a year at the AMI training centre, and it has been increasing over the last few years,” Sister Vas said. “But this popularity has been a problem too, since the word Montessori can now refer to any preschool, regardless of whether it follows the method or not.We do our best to reach the international standards, and despite the deviations in some schools here, we still swear by the method.”