Practitioners of this ancient form of medicine are called siddhars. Image courtesy: sensitiveplanet.com

Originally from South India, Siddha is considered to be one of India’s oldest medicinal practices. It’s also one of Sri Lanka’s four traditional medicine systems.

According to the National Institute of Siddha, Chennai, the roots of this practice predates written history, and is intertwined with the culture and mythologies of the ancient Tamil civilisation.

People who practice this are considered enlightened, and are known as Siddhars. There are three main methods of administering treatment: the Deva Maruthuvam (divine method); Maanida Maruthuvam (rational method); and Asura Maruthuvam (surgical method). Herbs and animal products are used to as medicine.

This is widely practiced in the Northern and Eastern regions of the country, predominantly among the Tamil community. Despite being known as Arab or Islamic medicine, Unani originated from Greece. However, it was developed by Arabs, most notably by Ibn Sina (Avicenna), the scholar-physician from Persia. According to Dr. Usuf, the practice spread across the Middle East to North India, and eventually trickled down to Sri Lanka.

It is believed that Arab doctors visited Sri Lanka to treat sick kings and ministers, and were granted large plots of land in return as a gesture of appreciation. Thereafter, the doctors who made the island their residence opened practices here, but combined their methods of treatment with the existing Ayurvedic practices.  What is currently practiced in Sri Lanka is known as Sri Lankan Unani.

Unani seeks to strike a balance in each individual’s humours or bodily fluids. It is believed that an imbalance between the four humours is what causes illness. The humours in question are blood (sanguine), phlegm (phlegmatic), yellow bile (choler) and black bile (melancholy). Dr. Samuel Hahnemann wanted to find a more humane method of healing, as opposed to blood-letting and using opium, which were common forms of treatment during his time. Image credit: Smithsonianmag.com

Founded in 1796 by the German physician, Dr. Samuel Hahnemann, this is a relatively new method of treatment where your mental, emotional, and physical symptoms are taken into account before administering medicine. Consultation goes into great detail of your symptoms, feelings, and lifestyle. This helps identify all possible factors which leads to the patient’s condition.

Ingredients for homeopathic medicine can be extracted from the vegetable kingdom, animal kingdom, and the mineral kingdom. 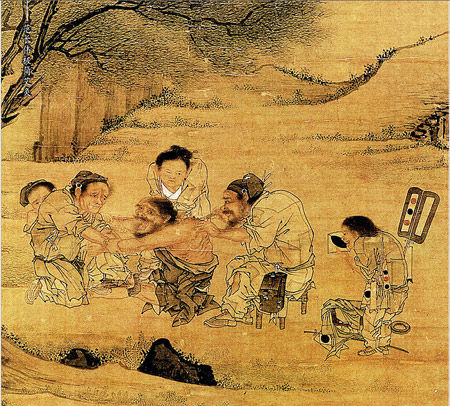 This method was introduced to Sri Lanka in 1982, when the Chinese government awarded scholarships for a number of Sri Lankan doctors to study the practice in China, Dr. Usuf said.

Currently, the Institute of Acupuncture in Sri Lanka awards diplomas and a Doctor of Medicine degree. Believed to be from the Vedic era, this is the most popular branch of alternative medicine in Sri Lanka. Dealing with humans, animals and even plants, this practice is categorised into three main branches, called nara, satva, and vriksha ayurveda.

Like homeopathic treatment, ayurveda also follows a holistic approach in diagnosis and treatment. Practitioners believe that all living beings are made of five basic universal elements, and that these elements combine to form doshas, or energies. An imbalance in your dosha causes illnesses. However, ayurvedic treatment focuses more on strengthening one’s immune system and balancing the dosha as opposed to combatting illnesses. Unlike homeopathy which uses a components from plants, animals, and minerals, ayurvedic remedies are purely plant based, Dr. Usuf elaborated.