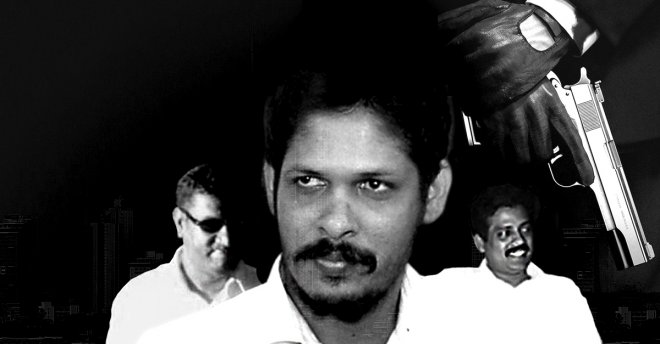 Notorious Nicknames: Stories Behind The Names Of Sri Lankan Gangsters

With the recent recapture of drug kingpin Sunil Shantha, after his crafty escape using a fake prison transport vehicle, the fact that he shares a name with famed singer Sunil Santha has reignited interest in mobster nicknames. In Sri Lanka, the most dangerous mobsters sometimes have the most ludicrous names, such as ‘Barrel Sunil’, ‘Maalu Nihal’ or ‘Laddu Roshan’.

Here are a few such examples:

In Sinhala, ‘Wambotta’ translates to ‘Brinjal Man’. Although the name is amusing, the man behind the moniker was no laughing matter. Wambotta was a powerful force in the south of the country over a decade ago. Wanted for murders that numbered in the double digits, apart from extortion and kidnapping, the mere mention of his name evoked fear in areas such as Tangalle, Beliatta and Walasmulla.

Wambotta was born Kitulmullagamage Saman Kumara in the village of Sooriyawewa. The youngest of two from a poor family, he assisted his family in selling brinjals at the Sooriyawewa market, which is where he got the name that would stick with him for the rest of his life.

Wambotta joined the notorious ‘Rathnaweera’ gang and later left them to start a criminal enterprise of his own. Reports say he became a prominent member of the underworld with the support of former Southern Provincial Council Minister M.K. Ranjith a.k.a Chandi Malli (or ‘rascal little brother’). Due to Ranjith’s conflicts with the Rathnaweera gang, he was assassinated by them. As revenge, Wambotta shot and killed Sunil Rathnaweera, who was the head of the Rathnaweera gang, using his best marksman Army Jiney.

From then on, he not only ruthlessly eliminated many members of the Rathnaweera family, but also continued with his underworld activities. He was killed in 2006 and the motive was suspected to be gang rivalry.

Karupaiya Wappu Balan (also reportedly known as Muniyandi Vappu Balan) was a prominent member of an underworld gang that operated out of the Bloemendhal/Maligawatta areas. The gang included other notorious underworld figures like Sudhakaran, Potta Naufer and Christopher. By the early ‘90s, they were a significant force in Colombo.

Bala was among the first heroin kingpins in Sri Lanka. Even after leaving Sri Lanka for India in the face of threats from rival gangs, he continued to traffic drugs from India. His underlings managed the day-to-day functioning of the business in Sri Lanka, and other underworld figures like Kimbula Ela Guna and Kochchikade Gathee became his associates.

Like Wambotta, he came to be known by the name Thel Bala (or ‘Oil Bala’) because he sold oil at some point in his life. However, while some reports state that the name had to do with the fact that he was selling oil out of a cart in his early years, others claim that it was because he held a monopoly over the vegetable oil business.

Potta Naufer rose to fame as the mastermind behind the assassination of high court judge Sarath Ambepitiya in 2004. His real name was Mohammed Niyas Naufer. Naufer was also born into unfortunate circumstances, and sold fruits in Hulftsdorf and Pettah in his youth. In a bid to earn more, he entered the drug trade in the ‘80s.

His enterprising nature gained him the friendship of Sudhakaran, who was the kingpin of the Maligawatte area at the time. However, in time, Naufer’s relations soured with the other players in Sudhakaran’s gang. They were especially strained with a gang member called Wijepalan, who was suspicious of Naufer, and eventually hatched a plan to kill him.

Wijepalan ambushed Naufer with a grenade while the latter was waiting by the roadside for a girl he was courting. While Naufer survived the explosion, some shrapnel from the explosion blinded him in his right eye. Since then, he was known as ‘Potta’ or Blind Naufer.

While some people leaned into their nicknames, Mohommed Hassan Mohommed Imtiaz despised his, and attacked anyone who used it. This only made the moniker Anamaalu—which is a type of banana—even more well known. Like many others who led a similar life, Imtiaz was born into poor circumstances and used to sell bananas out of a cart in his early years. But that was not how he earned his name.

From early on, Imtiaz had a silver tongue and an uncanny ability to slip away from any trouble that he found himself in. Seeing this skill, an uncle of his christened him Anamaalu Imtiaz, implying that he was as slippery as an anamaalu banana. However, his actions belied his amusing nickname. Reports say that he operated out of Maligawatta, and was responsible for drug trafficking, robberies, extortion and murder. He was kidnapped and killed by an unknown rival gang in 2009.

Arambewela Don Upali Ranjith was such a powerful force in his heyday during the ‘80s and ‘90s that the legend goes that even police officers addressed him as ‘Sir’. Upali was said to have begun his life in crime at a young age. It is during this time that he injured his hand during a robbery at a Manningtown garage. The resulting disfiguration led to his nickname ‘Soththi Upali’ — ‘soththi’ means disabled or disfigured.

Like Anamaalu Imtiaz, Upali was not fond of his nickname. He was close enough to political figures to serve in bodyguard roles and even join the ranks of the police as a sub-inspector and officially serve in such a capacity. He became even more notorious after a presidential commission appointed by President Chandrika Bandaranaike Kumaratunga concluded that he had a direct link to the assassination of MP Lalith Athulathmudali in 1993. In December 1998, during the trial for the Athulathmudali assassination was ongoing, Upali was shot dead on his way home.

Gampola Vidanelage Samantha Kumara was born into a family that was using illegal means to get by. They lived on meager means, in a shack built on the Bada Ovita wela (or Bada Ovita paddy fields) in Mount Lavinia. His father brewed kassipu (moonshine) and sold it to other poor men in the surrounding shacks to make ends meet. Some say that Kumara’s father was also called ‘sudaa’ (fair-skinned or foreigner), after the clear alcohol he was brewing. The story goes that Kumara simply inherited the name, or that the family called him suddaa as a term of endearment. Either way, the name stuck with him as he grew up, until he ultimately decided to get into the drug trade to make money for his family.

He built his enterprise and gang in the Bada Ovita area. This is how he became Wele Suda, which means sudaa from the wela (or field).

Suda was extremely successful. He amassed a vast fortune before skipping the country when the authorities closed in, and continued to manage his empire from various places abroad such as Dubai, and Pakistan where he was finally apprehended. A case was filed against him for allegedly obtaining Rs. 170 million from drug trafficking. He was sentenced to death for the possession of 6.7 grams of heroin, but was acquitted in February 2018 due to inconsistencies in the prosecution’s evidence.