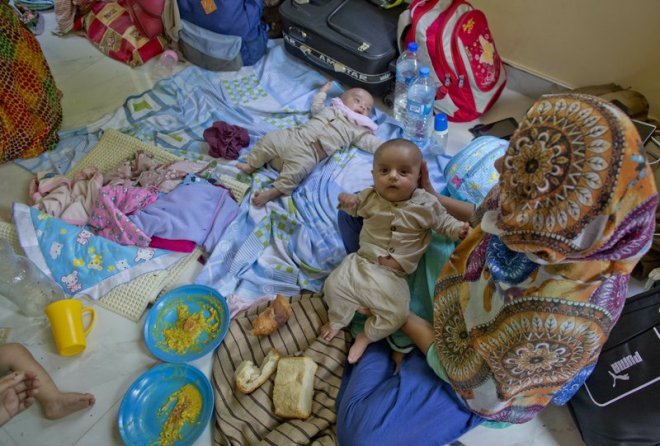 ‘Not Welcome’: The Plight of Foreign Refugees After The Easter Sunday Attacks

The rain from the night before had transformed the mosque grounds in Negombo into a muddy quag. Tracks led us to three large white tents set up in a dry area, where the stench of sweat and mud made for an unpleasant combination.

There were some four dozen men, at first glance, crammed into the tent; some attended to the elderly, washing them and helping them put on their clothes, while others took shelter under the square white tents.

Rugs and paduru were strewn across wooden pallets on which they sat, talking to each other in hushed tones, while others cradled wailing babies in their arms. Many sat idly, watching, as children ran about with joy, oblivious to the misery around them.

These are foreign refugees who have been given shelter in Sri Lanka. The beach town of Negombo, in particular, has been a refuge for many of those escaping religious persecution in Pakistan, Iraq and Afghanistan since the 2010s. In the years since, the number of refugees—mostly Pakistani Ahmadis, Pakistani Christians and Shia Muslims—has increased exponentially.

However, in a harsh playback of their personal grief and history, they have once more become victims of persecution, this time in their host country. This has been a consequence of the backlash following the Easter Sunday terror attacks.

M. Muneer Ahamed, a Sri Lankan social worker, is an imam at the Ahmadiyya mosque in Negombo. He currently acts as caretaker for over 1,000 Pakistani Ahmadiyya refugees escaping religious persecution in their country of origin. These refugees, who until Easter Sunday experienced a safe, if impoverished, existence, are now in a state of chaos and are internally displaced after local anger turned on them.

“The locals think that these refugees are fueling the terrorist movement,” Ahamed said. “But no one in this community is involved in the attacks. There is not a single record to prove these claims.” He put the tensions down to a fear of the ‘other’ or  ‘outsiders,’ but said: “They are refugees because they are persecuted for their religious beliefs by their original governments. They are already under attack. So how can they be involved in these attacks?”

Many of the refugees in Negombo had been living in leased homes until Easter Sunday. Several Pakistani refugees, especially those living in the vicinity of the St. Sebastian’s Church, Katuwapitiya, had lived off donations from the church.

However, after the attacks, many have been asked to vacate their homes by landowners fearing a backlash from other locals. Their fears were not entirely unfounded — in the aftermath of the attack, mobs surrounded the refugees in the areas of Negombo and Periyamulla, and demanded that they leave.

With nowhere to go, the refugee groups found temporary shelter at various locations — including the open car park of the Negombo Police station. It was from here that the Negombo Police rounded them up and packed them into several buses that transported them to a temporary community centre.

Sri Lanka is not a signatory to the United Nations 1951 Convention Relating to the Status of Refugees, or its 1967 Protocol. Refugees arriving in the country are only allowed temporarily stay until their applications for asylum elsewhere are processed. They are not legally allowed to work in Sri Lanka, forcing them to rely on an allowance from refugee agencies and handouts from local churches and charities to survive. Given the recent upheaval in the country, some 1,060 asylum seekers, including women and children, are currently seeking temporary shelter at local mosques, police stations and community centres for fear of possible reprisals and threats, the UNHCR reports.

Some of these refugees were relocated by the UNHCR to a rehabilitation centre in Vavuniya. “Around 35 families were transported in May. It will be much safer for them [there],” Ahamed told Roar Media. He said some, assisted by the international Ahmadiyya community, had even left the country and found asylum elsewhere.  “But many still remain at the community centre with nowhere to go,” he said. “The process to relocate them is long and dragged out. And most of them want to return to the homes they left behind in Negombo.”

Sister Noel Christine Fernando, living in Seeduwa, has worked closely with refugees and other disadvantaged communities throughout her life. She fears that exiled refugee communities will not be allowed to return to Negombo.

“On the day of the attack, I was able to go to Negombo and help families and others at the hospital. I was in Negombo until the funerals concluded and everyone went home. I was there when the refugees were transported and when that happens a group of nuns and I—who work on charity— helped them with provisions. But now the situation has changed completely,” she said.

She ascribes the change to a fundamental shift in attitudes after the attacks.

“We can build churches but if we fail to understand and love each other, then there is a problem. That is the question mark that is hovering above Negombo right now,” she said.