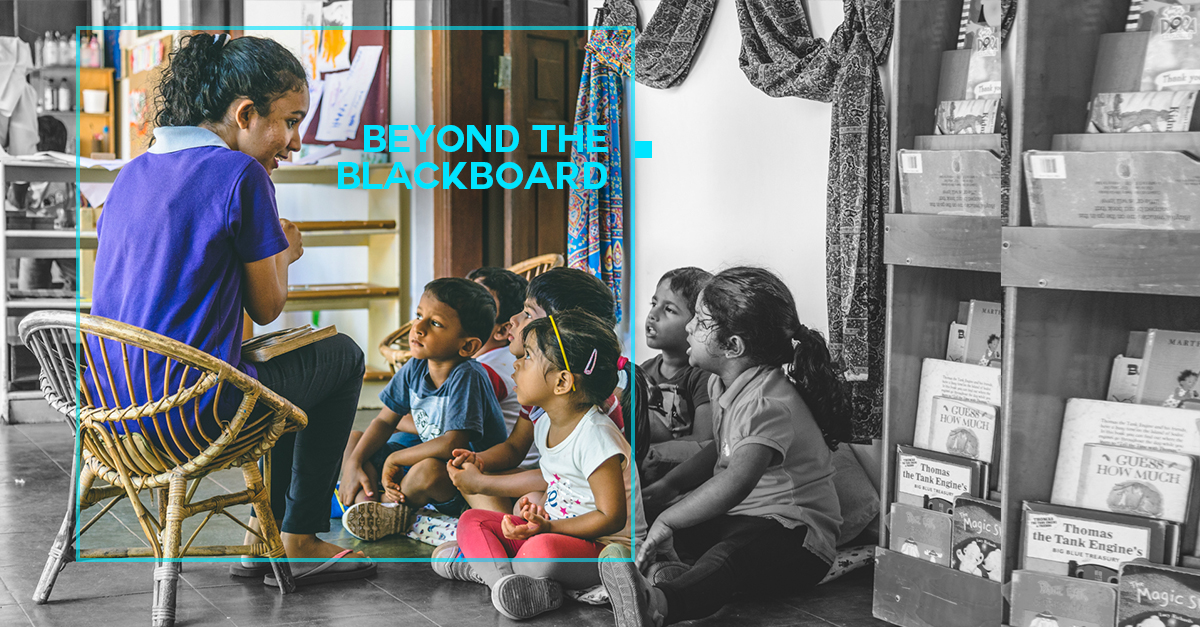 Tucked away behind a few twisted byroads in Dehiwala is a school.  As you approach it, you will notice something very different: It is not the interval break,  and yet, children are walking around freely, with not a single teacher chasing after them! This is the La Petite Fleur Academy, a school at which children come first.

La Petite Fleur, the little flower in French, is the brainchild of Bernadine Anderson, an educator with over 25 years of experience in the field of children’s education in Sri Lanka.  Fondly known as ‘Aunty Bernie’, she is passionate about giving children a wholesome educational experience. In fact, it was to give her own daughters a childhood as wonderful as the one she had growing up that Anderson returned to Sri Lanka from the United States, where she had lived and worked in the education sector.

“I was brought up outstation,” she said. “My dad was in the Air Force. My schooling was at Diyatalawa and at China Bay. I hardly went to school. We went to school in an old Navy boat, so if I didn’t want to go, I fell into the water with my books. First I fell without the books, then I realised that if I fell with my books meant a longer time at home. So I had a very organic kind of upbringing,” she said, with a mischievous twinkle in her eye. “My education happened around the dinner table at home. I also swam rivers and climbed mountains. So to me, coming back to Sri Lanka meant a lot.”

The La Petite Fleur (LFP) Academy began in 1992 in Ratmalana. The school followed a model that Anderson set at The Farmington Academy, a school she ran in Connecticut in the United States.  From there, it has grown into a network of schools covering early education to Advanced Levels in Ratmalana, Dehiwala and Galle.

Anderson believes that the children of today are more discerning and aware than those of previous generations and that it is important to give them an opportunity to express themselves. At the LPF Academy, lessons are not read out by the teachers. Instead, in an open classroom, students engage in a variety of activities: some study one subject with a teacher while others tackle other subjects. Still others attempt to build a car wash from building blocks or make sandwiches for everyone. The small-school concept is valued here. Each ‘community’—or grade—has only around 20 students per batch. There are no divisions. Each community is named after role models like Gandhi, Mandela, Lincoln, Montessori and Mother Teresa.

Students are free to choose what they want to study and how long they want to study it for. They are given the freedom of taking charge of their own education, but that freedom comes with responsibility. There is a very definitive record of work and if students haven’t delivered by Friday of each week, teachers have the option of holding them back from a very popular Creative Arts Programme (CAP). None of the children like that.

At LPF, a routine once begun, remains unbroken. So, for instance, if a child has decided to study Math, they will continue until the lesson is complete.  There are no interruptions, no bells ringing to usher them into other classes. Another life skill taught at the school is business studies. Every grade seven class is expected to start a business. It could be making bowls, or board games, or selling produce grown in the school, but they are expected to set up a real business, complete with a treasurer, secretary and CEO, with the goal of making real money.

Anderson’s unorthodox method of education has had positive results for children. She cites the example of a young girl. “She came to me from Oman. The parents were here for a holiday and they put her in here with us for a short while. If you asked her anything, like ‘What’s your name?’, all she would say was ‘I’m sorry, I’m sorry’. Her shoulders would cave in, she would drop her head. She was pale, she couldn’t go into the sun, she wouldn’t laugh.” Given the description, it was hard to imagine that the vivacious, outspoken young girl we were introduced to was the same child who struggled to interact with teachers and peers.

“I can give you [examples of] so many such children,” Anderson said. “That, I think, is the real proof that the system works. It’s not me, it’s not any one of us. It’s the system. We have no rules but we have a strong culture and we have a definitive system.”

Anderson talked about the difficulties she had in finding teachers with the right attitude.  “Having to say sorry to a child if you’ve made a mistake…It’s not everyone who likes to say sorry to a kid. Those are challenges,” she said.

It can be tough for teachers because they have to work around fluid schedules. So a teacher must be prepared, at any point during a day, to take on an A/L student or a grade four or five students, and so on. Although it is commonly used as a means to discipline students, teachers at LPF never raise their voices. “You also won’t hear the shush word,” Anderson said. “They’re [the students] allowed to talk,” she said, explaining that students are encouraged to engage with the teacher, and if necessary, challenge them on topics.

Even though it may seem tricky to test children who don’t follow the same subject at the same pace, this is not seen as a problem at the LPF Academy. This is because the students follow a strong honour code. So while the very biology paper that is offered to one child today is offered to another child tomorrow, students are unlikely to cheat. “We never have students hiding their paper and writing answers,” Anderson said. “This is because they have an honour code. And because they realise that if they do that, they’re messing with themselves.”

The Academy also holds a special conference at the end of the term, where teachers let Anderson know which children are struggling with academics and social skills. The school then holds a one-on-one session with the child, and it is only after this that parents are involved. The school does not even send a student’s progress card to the parent until it has been discussed with the child. This way, the child takes responsibility for what’s represented in that card, Anderson explained.

Parents who choose LPF, choose it by choice and not for the lack of it.  Anderson said she is very careful to make sure that it’s an educated choice that motivates the parents because LPF cannot be compared to other schools. “You have to know who we are and choose us for that alone.  It’s beginning to happen now. We’re showing top numbers in all our grades and I’m actually saying no [to admissions] now,” she said.

As the Academy’s School Captain and Captain of Culture and Arts— two confident and eloquent young women showed us around campus—it became clear that what is perhaps most remarkable about the school is its student body. No one looked fazed at the sight of a stranger being shown around the school. Everyone, from the youngest student to the oldest teacher, greeted us with a smile and a kind word before continuing with their lessons. Everyone knows who everyone else is, which is remarkable even in such a small school.

The student body has an unusually high level of responsibility and involvement within the school administration. For example, as we entered the school, the telephone at the reception was ringing with no one to answer it. But, Anderson explained, students are empowered to answer such calls. Student body representatives even sit in on the interviews for new teachers.

Students also participate in the admission process. Prospective students spend a day among the student body and their feedback is considered when deciding if a prospective student would fit into the school’s culture. Although the school does not have an entry test, Anderson does have certain criteria in mind when she screens students for admission. She explained that she always requires that at least one parent is involved in the child’s life before accepting them to the school. “I believe every child is a fit, but the parent?” She mentioned that she does not admit students older than grade eight anymore, because they find it difficult to adjust to the LPF system.

At Rs 10,000 per month at grade one, and a marginal increase in fees ever few grades, the school is more affordable than most private schools. The fees are inclusive of sports activities and access to the school’s Math, Science and Language labs, which are available to all students above Grade 4.

However, Anderson clarifies that children are not denied admission if they cannot afford the fees. “We never stop a child who doesn’t pay,” she said. “So we have 20 across the school who are on ‘scholarship’ basis. I’m told we have [Rs.]6 million outstanding from children [who] haven’t paid. But I do not stop them. The school is run as a not-for-profit so it’s not like anyone comes here banging on the door for money. ”

The only ‘rules’ at the school are to respect yourself and to respect others. But within those simple rules is contained an entire philosophy. “When they come to A/Ls, they tell me, ‘Aunty Bernie, there are a lot of rules in the two rules’,” she recalled with a hearty laugh. “But everything falls into it. Bad language is disrespect. If you don’t dress properly, it’s disrespectful to you. By the time they hit A/Ls, they realise that.”

What is also commendable is that none of the children opt for private tuitions. According to Anderson, this is because the students have internalised that success or failure is dependent on themselves. They therefore do not rely on anyone else to succeed. Besides, Anderson explained, students have the option of getting extra help from the school for subjects they are struggling with, so there is no need for external tuition classes. They certainly don’t seem to need it, as LPF students have consistently been in the top ranks of the IGCSE examinations, the curriculum that is followed at the Advanced Level. These achievements are proudly displayed on the school’s “hall of fame.”

With its exclusivity and limited size seemingly its only downsides, the LPF Academy is a valuable example of what could be achieved if children were given the agency and trust that they are rarely offered by the school system. The proof is in the many letters and notes Aunty Bernie receives, from the youngest students to the alumni that have left school, thanking her for making a difference in their lives.