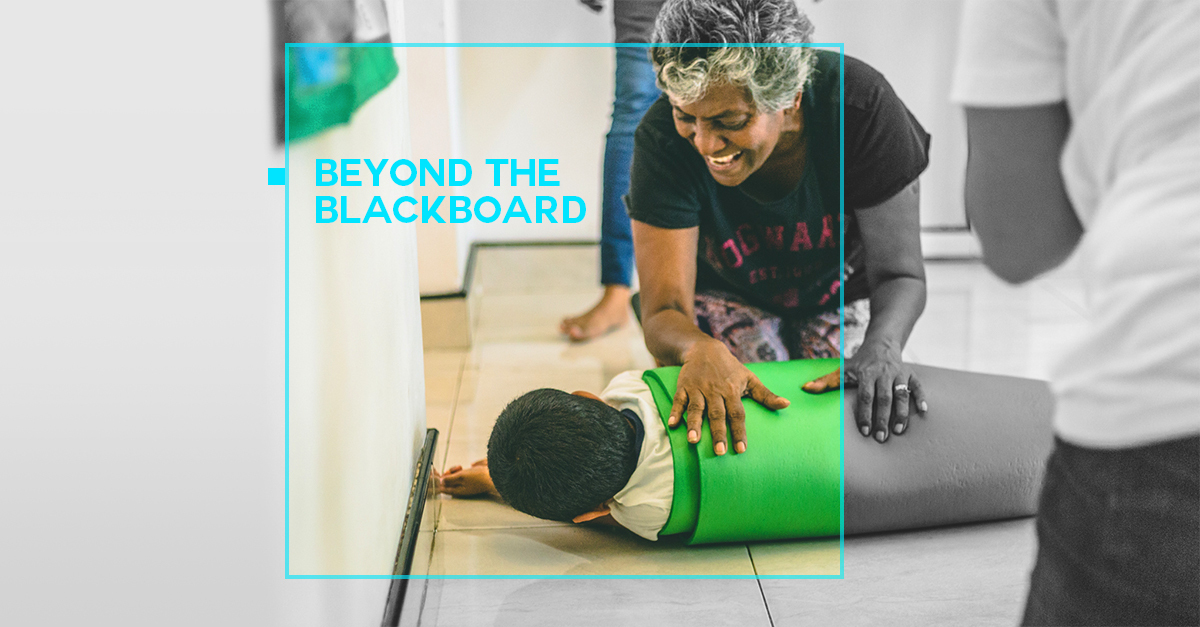 It’s a sunny morning when I step onto the playground that leads to the ABC School of Early Learning. The shady bungalow in Colombo 5 is painted in bright blues, greens, and oranges, and the sound of children reciting a nursery rhyme accompanies my entrance.

There are children everywhere. It’s hard to distinguish between ages and abilities in this mélange of kids who are all singing, writing, or playing. ABC’s egalitarian space mimics their approach to children with special educational needs. “Our goal at the ABC School of Early Learning,” explained Principal Surangi Munaweera, “is to work our hardest to integrate students with special needs into our regular classrooms.”

Sri Lanka’s education system is known for being more accessible than most: it’s free, mandatory, and schools are available across the island. But is the education system as friendly to children with neurodevelopmental conditions like autism, Down’s Syndrome, Asperger’s, or cerebral palsy?

Integration To The Mainstream

Munaweera and I meet in a ground-floor classroom, where one of the preschool’s playgroup classes is having a music lesson. We strain to hear each other over the sound of children singing to a piano accompaniment. As we are talking, some students I had met earlier in the Special Needs Unit join in the session of choreographed dance. They are accompanied by a ‘shadow teacher’—a teaching assistant who works closely with individual students to help them learn—and are slow to catch up to the pace of the already sweating three-year-olds, but join the jive with bubbling enthusiasm.

Children with special needs are encouraged to join their peers, as ABC believes integration is imperative to a holistic special needs education. As one student with Down’s Syndrome joins in—she is the youngest in the Special Needs cohort, at three-and-a-half years old—she is greeted by other students in the class, who dance with her. “It’s important to put special needs children around neurotypical children,” explained Ishanthi Perera, a behavioural therapist at ABC. “The children play, talk, and learn social skills off each other.”

Glancing at her peers, the student imitates their movements, and—with some assistance from her shadow teacher—joins the class rendition of the popular nursery rhyme Bingo Was His Name-O. “It’s often easier to teach the children with special educational needs through example,” said Perera. “This visual, imitative style of learning has, in my experience, tended to work better with a lot of our kids.”

The advantage of socialisation in schools is twofold. For neurotypical children, it normalises being around their neurodiverse peers, and shows them, from a young age, that there’s little to be afraid of. For children with special needs, mixing can help them adapt to environments they might be uncomfortable in.

Hari Darshan, whose son Louis* lies between mild and moderate on the autism spectrum, says he is keen to get his six-year-old into a mainstream school next year because he believes socialisation is important, but he is worried about Louis making friends, because he is non-verbal. “If it’s done sensibly, and the class is monitored and set up carefully, then I think there’s a good chance he will fit in and do well,” he said.

Louis attends both ABC and Reach Beyond, a therapy centre for children with learning difficulties in Borella. Darshan said ABC helps Louis with socialisation and academic requirements, while Reach Beyond also looks at behavioural change alongside academics.

As might be expected, there are varying opinions on whether integration is necessarily successful beyond pre-school, if children with special needs were to enter the mainstream. Perera admits that integration is a lot easier in an environment like ABC’s. “Once you get to public schools, their only option is to follow the national syllabus,” she said. “At ABC we focus on fundamental skills: Can a child eat, drink, and go to the bathroom? Especially for children from one-a-half years to three, we really focus on making sure the student is ready to learn.”

Others point out that academic readiness does not equate to the independence that is often expected when a child starts school. Malathi Kahandaliyanage, a founder at Reach Beyond whose son has autism, said, “If a child with autism can go to school and recite the alphabet and knows all the shapes and so on, but has to wear a diaper because they have no idea when they need to go to the bathroom, are they really ready for school?” But with little institutional recognition for children with special needs in Sri Lanka, where only a ‘one-size-fits-all’ national syllabus is published, parents are left with few choices for education.

For this reason, they are compelled to push their children into mainstream schools once they are done with preschool. Even then, and despite growing awareness of conditions like autism in Sri Lanka, it is still not easy to find accommodations for children with learning difficulties in mainstream schools.

According to educational psychologist Tamara Handi, who works at the University of Kelaniya’s Multidisciplinary Clinic in Ragama, which helps children with a range of neurodevelopmental and neurological conditions, schools are often reluctant to take on kids with disabilities.

The problem is further compounded by the fact that the government only wields limited influence as far as these decisions are concerned. “The Education Ministry itself struggles to convince teachers and principals because the education system is quite decentralised — the ministry does not have a lot of say on individual schools, where most decisions are made by school principals,” she said.

Schools that do take on children with special needs, often struggle to meet those needs. “[Louis] is not severely affected by his condition, and so I am hoping he can do some sort of mainstream education,” Darshan said. But he explained that while there were a number of schools willing to accept Louis, many of them didn’t have an understanding of his condition, or how to teach children with it. Willatgamuwa, who is a coordinator and founder at Reach Beyond, agreed. “I have been to schools that claim to have an inclusive set up, but in reality, the special needs kids don’t do anything all day — they are just being babysat,” she said.

While children like Louis may be able to enrol at a school with a personal shadow teacher to help academics, others with severe autism, or with similar neurodevelopmental conditions that require radically different methods of teaching, may find it even harder to secure an education. “There are some children who need one-on-one teaching,” said Willatgamuwa. “Sometimes, if the child is severely autistic, then there is no way they are going to be able to sit and be with a class.”

Opening a special needs unit can have an unintended negative effect on schools because of widespread social stigma. “When we opened our Special Needs Unit at ABC, a lot of the other children were pulled out of the school by their parents,” said Munaweera. “With a lot of children running around and throwing things, parents worry that their child might get hurt.”

Whether it’s inclusive mainstream schools or specialised ones, Darshan argues that parents should have options to choose from. Given that conditions like autism are defined on a spectrum and the range of developmental needs that different children might vary from child to child, there is no universal approach to special needs education.

Kahandaliyanage, whose son is mild to moderately autistic, and also has a range of learning difficulties, was homeschooled after grade five. “We didn’t get much from the education system. I just wanted my son to be able to sit in class with other people, even though he couldn’t learn anything,” she said.

Tharsiny Markandu, whose daughter was diagnosed with ADHD after two years in an international school, found a move away from academically competitive institutions to be helpful: “After grade two, everything was going over her head, so we put her into a much smaller school,” she said. “The smaller environment sat well with her and she really developed.”

Darshan suggests that early intervention programmes that teach life skills, like at Reach Beyond, are of fundamental importance for any holistic special needs education. He also believes that individualised education plans for children with special education needs are imperative moving forward. But Willatgamuwa said she would be happy with inclusion, with added resources like therapy in order to prepare the children for school.

For the time being, however, it is small-scale workshops and therapy centres at the grassroots that cater to children with special needs in Sri Lanka. Even at Handi’s public sector Ragama clinic—which, among other things, works to make sure children with neurotype conditions participate in education—children’s educational needs are met through personal interaction with schools across the island, due to a lack of a reliable system to depend on.

Parents do most of the legwork in this improvised framework, and are often forced to give up their careers to cater to an already life-altering diagnosis. With many expenses like therapy, private education, and shadow teachers, parents are typically the ones financially burdened with making sure their child is accommodated and taken care of.

While Darshan admits things have changed a lot in the last decade, he is quick to emphasise how much more there is to be done. For instance, he said his son Louis has a beautiful voice—despite being non-verbal—and enjoys singing. “It takes a creative approach to teach children with autism,” he said. Darshan’s efforts to find Louis a swimming coach and a music teacher have been stymied by an unwillingness to take atypical approaches to teaching.

But recalling Louis’ first meeting with his extended family, Darshan said that although he was nervous about how they would react: “I was really surprised when some of my relatives went on their knees to introduce themselves to Louis. Speaking to him at his eye-level made him feel comfortable, and he immediately engaged with them.” It is evident that teaching children with special educational needs is more than simply getting them up-to-speed with their peers. Working to meet children like Louis half-way, and encouraging the education system to be adaptable could be a healthy first step to bridging the gap.