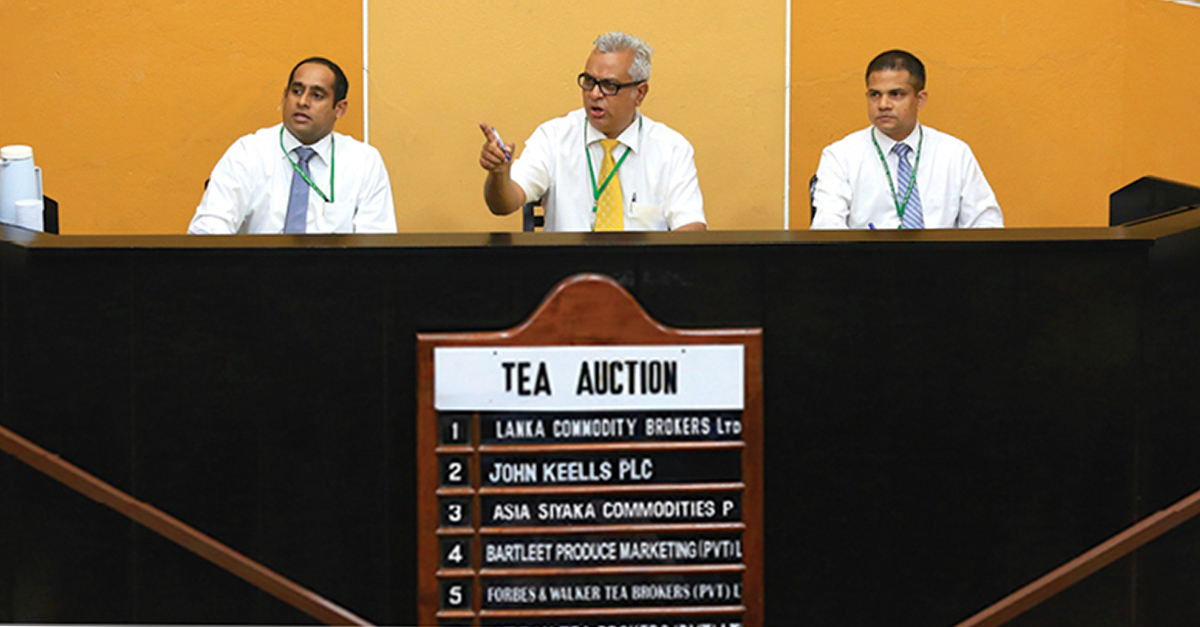 Almost every week, for the last 126 years, well-dressed tea traders have gathered at the Ceylon Chamber of Commerce (CCC) to snap up Ceylon Tea for export.

Over two consecutive days every week, the sound of bidding echoes in three noisy, crowded auction rooms, as hundreds of traders place calculated bids at a rapid pace. On average, at least five sales are made a minute at the Colombo Tea Auction (CTA), which is the oldest operational and largest single-origin tea auction in the world.

As any visitor to the CTA would attest, the atmosphere is electric. Stewards, brokers and traders execute what can best be described as a complex, but well-choreographed waltz of sales and bids, frequently punctuated by the sound of the gavel striking the block to indicate a lot has been sold.

However, following the COVID-19 outbreak this year, the Colombo Tea Auction nearly came to a halt.

The tradition of selling tea by auction first began in 1679, with the London Tea Auction, which functioned as the key trading point for tea brought in from China and India—[later, tea from other parts of the world, including Ceylon found their way to the London auction]. After World War II, rival tea auctions in tea-producing countries rose in popularity as producers—realising they could get paid faster, started channelling larger quantities of tea through auctions in their home countries. Having outlived its importance, the London Tea Auction closed its doors forever on 29 June 1998.

The first-ever tea auction in Sri Lanka was conducted on 30 July 1883 at the offices of Somerville & Company, a produce brokering firm. It was a private auction and all five lots offered went unsold. Despite the inauspicious beginning, tea traders persisted, eventually tasting success. On 18 June 1894, the Colombo Tea Traders Association (CTTA) was formed with the primary objective of overlooking the interests of tea traders. The association set about reviewing the relatively broad and somewhat informal collection of rules under which tea auctions were conducted until then. On 1 November 1894, it ratified a formal set of rules for the sale of tea by public auction.

From then on, everything ran like clockwork. The auction took place, week in, week out. Millions of rupees worth of tea exchanged hands, and producers were paid in full by the seventh day after an auction of a given batch of tea.

This continued over the years, under rules and procedures that remained largely unchanged since they were first laid down in the 1880s and 1890s. However, the COVID-19 outbreak changed this tradition for the first time. With Sri Lanka suddenly placed under curfew, this ritualistic tea auction—which went on unimpeded even during the height of a civil war—came to an abrupt halt.

Since tea is a perishable commodity, storing freshly-plucked and processed tea for months was not an option. The COVID-19 pandemic broke out in Sri Lanka with the Sinhala and Tamil New Year season just around the corner, and plantations were in desperate need of money to pay salaries and bonuses for a workforce of nearly 150,000. Therefore, it became necessary to find a way to conduct the CTA, despite the curfew.

Previous efforts to digitise the CTA had fizzled out for various reasons. Noteworthy amongst them was an effort undertaken by economist and former parliamentarian, Dr Harsha de Silva, nearly eighteen years ago. De Silva recounted the story on a recent Facebook post, and several stalwarts of the tea industry had left comments highlighting their own failed efforts to digitise the CTA.

“The idea to digitise the auction has been on the table for a long time. But the pandemic put us in a situation where we just had to get it done,” Jayantha Karunarathne, Chairman of the Colombo Tea Traders Association (CTTA) told Roar Media.

With time running out and an entire industry’s survival at stake, CICRA Solutions, a local IT service provider stepped up to the task. The company had already worked on a project with the Sri Lanka Tea Board, and had an understanding of how the CTA worked. With input from the tea traders, a minimum viable prototype (MVP) was developed within a week, Karunarathne said.

Thus, the first e-auction for Ceylon Tea was held on 05 April 2020, to the applause of the relieved tea industry.

“I don’t think we will ever go back to holding the auction the old way. Everyone is now used to the [online] system,” Karunarathne said. All subsequent auctions since the one held on 05 April were conducted via the e-Auction platform. Average prices for tea grown at the three elevations have also remained high since (at the time of writing).

In Sri Lanka, tea is classified into three types based on the elevation at which it is grown. Prices for all three—low, medium and high-grown—have been on the rise since April 2020.

Having successfully implemented the e-Auction system, the CTTA is now planning to develop a fully functional e-Auction platform for long term use. “We are in the process of calling for RFPs [Request for Proposal],” Karunarathne said.

COVID-19 may have brought down the curtains on the long-held traditions of the CTA rather abruptly, but the e-Auction will undoubtedly serve as the beginning of a new chapter in the 126-year story of the Colombo Tea Auction.