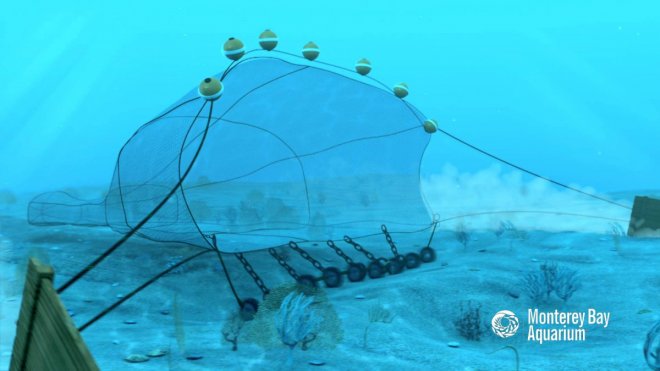 Taking progressive steps to conserve seabeds and aquatic lives, bottom trawling was banned in Sri Lanka as of 06 July 2017. The practice is an industrial mode of fishing which uses weighed-down nets to sweep across the seabed and catch everything in their way, thereby causing irreparable damage to coral and plant life. According to the amendment made to the Sri Lankan Aquatic Resources Act this year, fishing operations utilising bottom trawl nets are completely prohibited. The question now is, have fishermen stopped using them? And how is the government implementing the ban?

Are Trawl Nets Still Being Used?

Trawl nets being used in the Puttalam District.

According to fishermen’s unions, yes. Currently, there are approximately 200 boats with trawl nets in Mannar and 500 more in the northern areas of the island, M. Alam, Secretary of the Northern Provinces Fisheries Union said.

Speaking to Roar Media, he emphasized that trawls still ply Lankan waters freely. In an attempt to combat this, small scale fishermen from Puthikudieruppu filed legal action against boat owners who were using trawl nets. Following their complaints, five trawl net operators were arrested on the September 18, but were released on bail a day later.

In addition to damaging the underwater ecosystem, these nets also cause damage to regular fishing nets set up by small-scale fishermen—which is what compelled small boat owners to go to courts.

The Act prohibits the licensing, use, transportation of, towing, selling and purchasing of the nets, despite it still being used in Mannar and the North. Speaking on the condition of anonymity, ground sources stated that one of the main reason these are still utilised so freely and in such large numbers is mostly because of strong objections by boat owners who operate them, and due to bribes that exchange hands. We were told that bottom trawling is especially popular when fishing for prawns, as one could haul in a couple of hundred kilos of prawns per day—but this means a small number of people catch a large number of prawns. By extension, this deprives other fishermen of their catch, while also capturing thousands of inedible and smaller fish.

“We keep losing fish,” Alam said. “Lots of young fish get captured in the process, including ones that can’t be sold or eaten. The boats with the trawl nets capture everything indiscriminately, barely leaving anything for the rest of us,” he added.

Anyone who fails to comply with the amended Act is liable to be fined Rs. 50,000, and face up to two years imprisonment. How then were the trawlers able to bail themselves out barely a day afterwards?

When Roar Media contacted the Ministry of Fisheries and Aquatic Resources for reasons as to why severe consequences did not have the desired effect of eliminating the use of trawl nets, we were told that the punishments weren’t strictly enforced due to the economic conditions of fishing families.

“Even though there’s a two year jail term, we don’t imprison fishermen for that long because they’re the breadwinners of the family. A hefty fine and imprisonment will completely destroy them,” Ministry spokesperson M.D Wanninayake said. The fishermen who are remanded for using trawl nets just pay their bail and resume fishing, especially since the whole Rs. 50,000 isn’t levied, he added.

However, the Ministry is taking active steps to reduce the use of trawling nets by introducing alternative fishing methods, nets, and conducting awareness programmes among the fishing community. He stated that there were also training opportunities for fishermen to learn how to manage resources, which is what the Ministry is veering towards.

“It’s not just a problem for the fishing community. When our resources are destroyed, it affects the environment and is a government concern. We’re doing everything we can to reduce this, but it’s also in the hands of fisheries unions and the community to ensure that our oceanic resources are protected,” he stated, adding that there has been a positive response so far, save for the few who still operated trawl nets.

The Hindu reports that Tamil Nadu was the first to engage in bottom trawling, and were soon followed by a handful of Sri Lankan fishermen after the civil war ended. While most Sri Lankan fishermen—especially those represented by the Unions—are all for an immediate ban and are currently engaging with the Fisheries Ministry for a solution to end to the use of trawl nets, fishermen from Tamil Nadu continue encroaching on Lankan waters. The latest reported incident was on 08 October, where 10 Indian fishermen and a trawler were seized by the Sri Lankan Navy. While the fishermen are arrested and produced before courts, they’re invariably released back to India following pressure to do so by the Indian Government, sources said.

When Roar Media asked the Fisheries Ministry of what steps are taken to discourage Tamil Nadu fishermen and what the consequences of trawling in Sri Lankan waters are, we were informed that the Indian fisher-folk are produced before courts after being apprehended by the Navy.

“The fishermen, their equipment, and the boats are produced before courts. However, as the people who are arrested are merely day labourers or employees, and not the boat owners, we hand them back to India. The State confiscates the rest of the equipment,” Wanninayake elaborated.

Ministry sources pointed out that merely releasing the Indian fishermen every time an arrest is made is counterproductive, as they continue to repeatedly engage in trawling all over again. We were told that it’s a play of power and politics: with the Indian Government demanding the release of their fishermen, and the Sri Lankan government obliging to maintain friendly ties. Sources also stated that Fisheries Minister Mahinda Amaraweera, along with a few other delegates, are to meet officials in New Delhi to discuss what could be done to resolve the issue.

Meanwhile, M. Alam and his union continue to push for the implementation of the ban, contradicting claims made by the Ministry that those engaged in trawling are poverty stricken fishermen. They are in touch with their local law enforcement agencies and politicians, with discussions scheduled throughout the week. While it is commendable that the government has taken steps to preserve our oceans (at least on paper), amending existing Acts without a practical implementation mechanism simply isn’t enough.