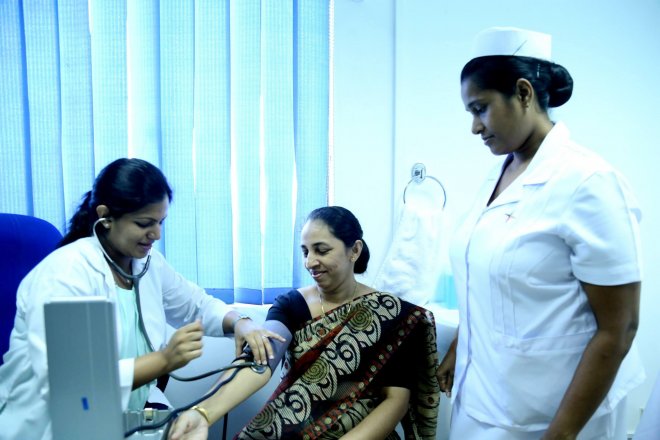 With the world’s first documented evidence of a hospital being the ancient hospital at Mihintale, Sri Lanka seems to have been doing well in healthcare for time out of mind. Image courtesy: wikimedia.org

According to the World Health Organization (WHO), the term ‘universal health coverage’ is defined as a system in which all people can use the quality promotive, preventive, curative, rehabilitative and palliative health services they need, while also ensuring that the use of these services do not expose the user to financial hardship. If you were to take a cursory glance at Sri Lanka’s healthcare, you would see a system that seamlessly provides these services free of charge to every citizen of the country. However, its overall high standards often direct attention away from certain existing gaps which should be addressed if we are to truly achieve universality in healthcare.

When Free Healthcare Is Not Entirely Free

Picture this: a man from a low income background. He has come to seek treatment at one of our many public hospitals. The hospital is overcrowded and the waiting line is intolerably long. He has had to lose some of his wages, since this hospital only offers outpatient services during normal working hours.

Hours later, after he finally gets his turn, a new problem arises: the hospital does not have the drugs he has been prescribed, and neither does it offer the laboratory services he needs. He is faced with three choices: to either ignore his medical requirements, wait for months until the resources become available, or turn to private services, thus incurring expenses which would weigh heavily on him financially.

This is not an uncommon situation when it comes to government healthcare services. Technically speaking, the system is entirely state funded, and services are provided free of charge at the point of delivery. In reality, however, a sizable chunk of the country’s households—60% in fact—are driven to spending their own finances out of pocket for surgery, drugs, laboratory tests, specialized treatment and medical investigations.

This means that many people are compelled to either forgo their healthcare needs or utilize private healthcare, and as it is, it is the poor that are hardest hit by these financial burdens. This issue arises as a result of a number of drawbacks faced by patients who seek treatment from national hospitals, the most significant of which are:

The overlooked, The Ostracized And The Side-lined

Sri Lanka contains a sizable but mostly hidden community of LGBTQ individuals, but previous negative experiences and societal attitudes often make them reluctant to get the medical assistance they need. Image courtesy: media4change.com

Everyone has the right to unrestricted access to quality healthcare, regardless of gender, sexual orientation or lifestyle. Policy-wise, Sri Lanka offers healthcare to all, but it is not uncommon to come across stories where certain people have been overlooked, shunned or had unpleasant experiences within the healthcare sphere.

For instance, in the year 2015, a country-wide report on sexual and reproductive healthcare revealed that the sector has a tendency to sideline people who are not a part of the ‘traditional’ heterosexual family. Single women, for example, might find it difficult to be included in national health schemes due to conservative mindsets regarding sexual activity outside marriage. At-risk populations like sex workers, and sexual minorities, also suffer from adverse experiences in the healthcare sector, mostly due to a lack of information on the problems faced by the LGBTQ community, the criminalization of homosexuality and cultural prejudice. Statistics to support this claim are far and few in between, but research conducted by Equal Ground revealed that 29% of the individuals who identified as LGBTQ in the survey had been refused medical treatment at some point in their lives.

When Roar Media spoke to Sriyal Nilanka, Communications Officer of EQUAL GROUNDS Sri Lanka, he was emphatic about the existing disparity in healthcare when it came to HIV/AIDS patients and members of the LGBTQ community.

“Take transgender persons for instance,” he explains. “There are a lot of unpleasant situations that arise when transgender persons are admitted to a hospital, or have to go into healthcare for some reason.” This, according to him, ranges from cases of blatant discrimination and  refusal of treatment, to unwanted sexual advances and fear-mongering. There was even one case he had come across where a doctor from a well known public hospital had taken to passing around the contact numbers of gay persons, and making sexual advances towards them.

Traumatic and negative experiences like this only serve to make these individuals more reluctant to approach healthcare institutes, even when they are in dire need of treatment. Medical personnel are more often than not openly hostile, insensitive or ignorant of the specific healthcare needs of sexual minorities.

However, Nilanka also pointed that this issue is one which is not just confined to the public healthcare sphere, but also extends to the private one.

Even though the estate community’s contribution to the country remains great, its population is known to lag far behind other regions when it comes to reproductive health. Image courtesy: newsin.asia

The concentration of resources, both physical and human, directly influence the performance of any healthcare institution. Supporting this are the results of a 2015 study comparing the quality of public and private healthcare: public healthcare, it turns out, can deliver just as well—or even better—than private healthcare if it is not constrained by a lack of resources.

Despite the efforts of the Sri Lankan government to provide a well-networked system of healthcare for the whole island, the Ministry of Health acknowledges the existence of rural-urban and regional disparities in healthcare resources across the country. The most hard hit appear to be the population from the estate sector, conflict areas and less prosperous districts.

The estate sector, for instance, has always had a high MMR (Maternal Morbidity Rate) and IMR (Infant Mortality Rate) in countrywide statistics. It also fares badly in nutrition, with one third of the women of reproductive age suffering malnourishment. While community ignorance and low education levels also exacerbates the issue, plantation workers often have difficulty in accessing healthcare services due to logistical reasons—such as transport limitations and difficult terrain—as well as regional disparities in physical and human resources. For instance, estimates suggest that the current doctor:population ratio in Colombo is much higher than that in Nuwara Eliya.

There are many promising projects in place which are attempting to bridge this gap in healthcare services, but greater government investment, development plans and national strategies are vital if we are to see any decline in sectoral imbalances.

In the National Health Strategic Master Plan for 2016 to 2025, the MoH acknowledges a lack of infrastructure, an imbalance of physical and human resources and the want of management and monitoring in order to provide sustainable and quality healthcare to all the country’s citizens. While the year 2017 saw a dip in the annual budgetary allocation for healthcare (from rupees hundred and seventy four billion to one hundred and sixty billion) the healthcare allocation for the year 2018—more than rupees two hundred billion—seems promising, and suggests that the government remains committed to boosting healthcare. That said, we still have a good way to go before we can truly look at our healthcare system and say everyone, everywhere.