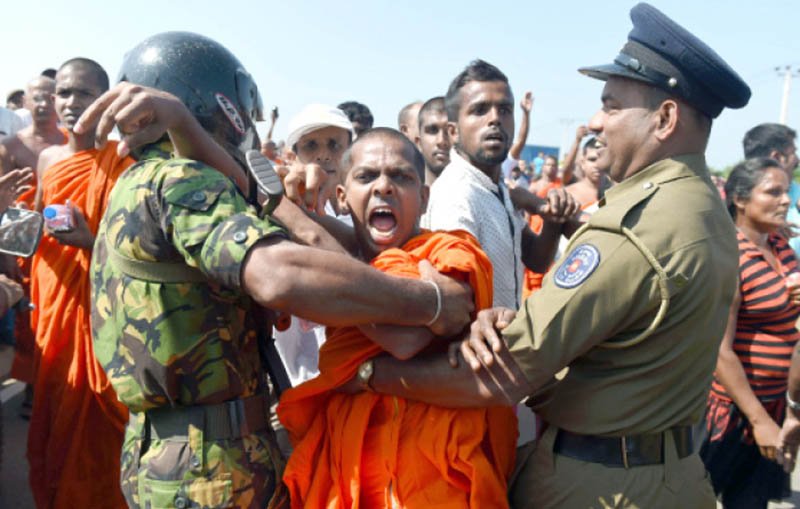 On 6 March 2018,  Sri Lanka imposed a state of emergency to help quell racial riots that had broken out in the hill capital of Kandy. The state of emergency allows the President to use extraordinary powers under the Public Security Ordinance, ‘in the interest of public security and the preservation of public order’. This is not the first time Sri Lanka promulgated emergency laws to quell racial riots since it was granted dominion status within the British Commonwealth. In 1958, a state of emergency was declared by the Sri Lanka Freedom Party (SLFP) government after violent clashes erupted between the majority Sinhalese and the minority Tamils. A state of emergency was declared during the Janatha Vimukthi Peramuna (JVP)-led riots in 1971, and once more following the horrific violence in what has come to be known as ‘Black July’ in 1983. The state of emergency was also in place for much of the three-decade long civil war, making the 2018 declaration of emergency the first in nine-years since the war ended in 2009. As United Nations Under-Secretary-General, Special Representative for Children and Armed Conflict Radhika Coomaraswamy notes in ‘Rule by emergency: Sri Lanka’s postcolonial constitutional experience’ (2004), ‘Dating from when the government of Sri Lanka first declared a state of emergency in 1958 until the most recent lapse of emergency powers in 2001, Sri Lanka has experienced more years of authoritarian power, under the guise of emergency powers, than of democratic governance’. But what ‘authoritarian’ powers does the President wield during times of crisis, such as these? 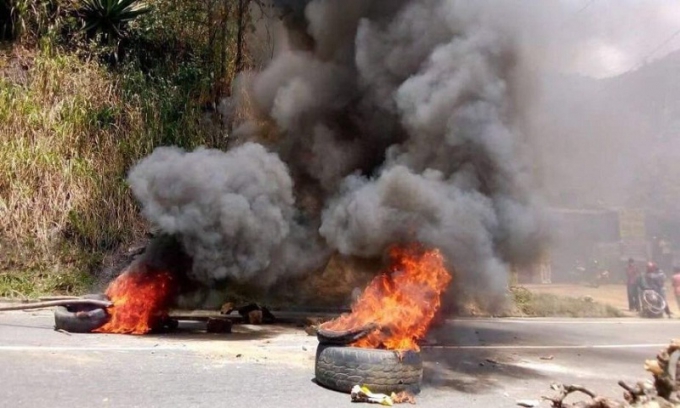 ‘Where circumstance endangering the public security in any area have arisen or are imminent and the President is of the opinion that the police are inadequate to deal with such situation in that area, he may, by Order published in the Gazette, call out all or any of the members of all or any of the armed forces for the maintenance of public order in that area’. [12.1]

‘Where the President considers it necessary to do so for the maintenance of public order in any area, he may, by Order published in the Gazette, direct that, subject to such exemption as may be made by that Order or by any subsequent Order made under this section, no person in such area shall, between such hours as may be specified in the Order, be on any public road, railway, public park, public recreation ground or other public ground or the seashore except under the authority of a written permit granted by such person as may be specified in the Order.’ [16.1] 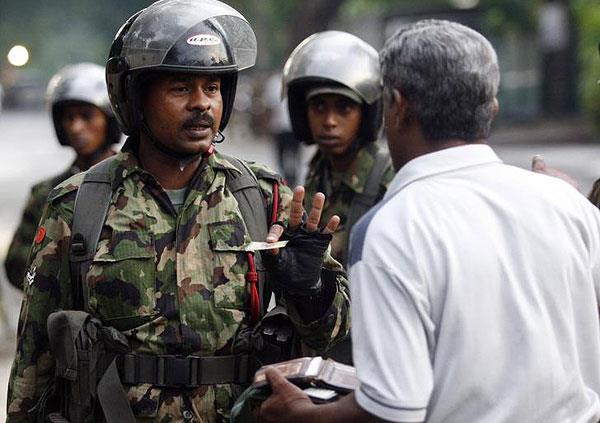 A member of the armed forces stops a civilian from entering an area troubled by violence. Image courtesy srilankacybernews

‘Any police officer, or any member of the armed forces who is called out by Order made under section 12, may, if a written authorization to do so is issued to him by the President or any person appointed by the President to act on behalf of the President under this section, seize and remove any gun or explosive in the possession of any person in the area to which such Order applies and keep it in such custody as may be determined by the person issuing such authorization, and may, for the purpose of seizing and removing any gun or explosive, enter, with such assistants as may be necessary, any premises or place in such area andsearch such premises or place and any person present therein.’ [13]

‘Where the President considers it necessary in the public interest to do so for the maintenance of any service which, in his opinion, is essential to the life of the community, he may, by Order published in the Gazette,declare that service to be an essential service’. [17.1] 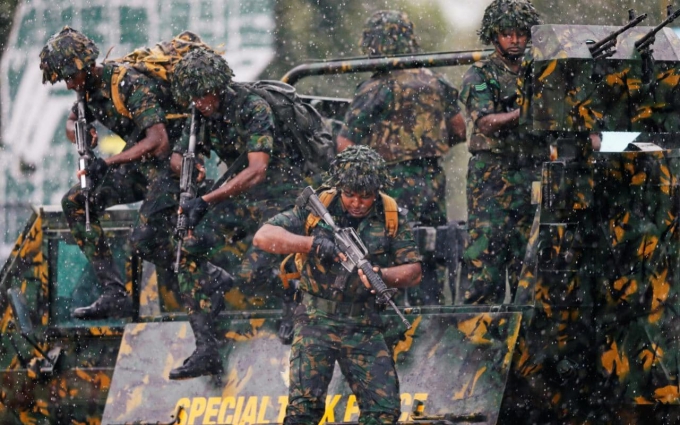 Members of the elite Special Task Force were sent to Kandy to quell the racial riots. Image courtesy theworldnews.net

‘Any police officer may arrest without warrant any person who is committing or has committed or whom he has reasonable ground for suspecting to be committing or to have committed any offence under section 16 or section 17’. [18]

These moves have been criticized by some who claim the government is violating a fundamental right of expression. They also argue that the general populace is deprived of methods with which to communicate with friends and family during these troublesome times. Parallels have been drawn to repressive regimes that have banned the use of social media in order to curb the freedom of its people. But these  measures have also been hailed by countries who point out that the Sri Lankan government has done what even the US government hasn’t been able to; pull the plug on hate speech and ‘fake news’ on social media—platforms increasingly seen as powerful tools used to unleash violence on ethnic minorities, destabilize governments and affect the outcomes of elections.