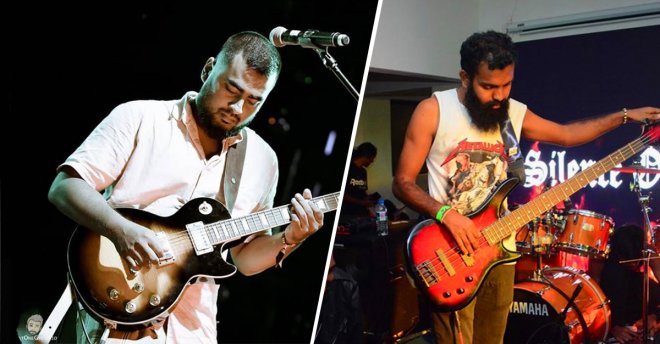 Striking the Right Notes: Some Of Our Best Underground Musicians

Sri Lanka has a rich musical history, characterized by a folk tradition, such as the Sinhalese Virindu, or the Portuguese influenced Baila. But there is now a burgeoning contemporary music scene that, while still relatively new, is making an impact.

This music is unique in that it is also very different from the relatively nouveau, yet mainstream, Sinhala pop music. This ‘underground’ music is gaining traction as a host of new artistes seek expression through entirely original music that has paved the way for a new kind of Sri Lankan sound.

Roar Media undertook a mission to decide on some of our favourites out there.

The Serendib Sorcerers are a band that truly experiments with sound, creating a complex fusion that blends traditional Sri Lankan folk music with contemporary Western sound.

“The idea for this came when I was studying for an honours recital back when I was in school— I had to perform a bunch of Sinhala folk songs,” Sumudhi Suraweera, the band’s founder told Roar Media. “Years later, we got some people together with the intention of just building on that traditional genre, without any intention of making money or marketing.”

The Sorcerers released their eponymous first album in 2012 and performed gigs for a few years, before taking a three-year hiatus, during which a few changes were made to the lineup. In August 2019, they returned with their second album ‘පතුලෙන් මුතු ගෙන’, which draws influences from different local regions.

With their humour-infused experimental sound and multimedia ambitions that have already materialized in a youtube miniseries, Dotdotay is less of a band, and more of a theatrical project — and they’re only just getting started.

Hidaayath Hazeer leads with vocals, Riyal Riffai is on bass, Sithija Dilshan is on drums and Mewan Kaushike is on guitar. The band is still relatively new, having only officially begun in 2019. Despite this, they are in the process of releasing a music video and their first single, and have played at multiple gigs around Colombo.

Musically, the group blends rock and roll, funk and pop with catchy, funny, Sinhala lyrics, to create an amalgamation of sounds and styles—maintaining a steady groove that their audience can dance to all the while.

“We would like to eventually break into the mainstream Sinhala market, but do so in a way that doesn’t compromise our sound,” Sithija Dilshan, the band’s drummer told Roar Media. He admitted that this would be a difficult task to undertake, considering the band’s idiosyncratic sound, but believes that by gaining enough of a fanbase, and releasing more multimedia content like music videos, it is a possible goal to reach.

From the hill capital Kandy, Silence of Loud is just one of the handful of Sri Lankan heavy metal bands that compose their music primarily in Sinhala. Describing their sound as hard rock, progressive metal, and even glam metal, Silence of Loud draws inspiration from popular rock bands of the 70s, 80s and 90s, like Metallica, Queen, Iron Maiden and Pink Floyd.

While many aspiring acts the world over cite these rock bands as influences, Silence of Loud’s poetic use of the Sinhala language to articulate complicated emotions has ensured a cultural sincerity that has come to define their sound.

Founded by Sachithra Jayawickrama in 2018, the band comprises of Jayawickrama and Kavin Harshan on rhythm and lead guitar, Sajith Sri as the bassist, Kaveesha Karunarathne on drums and Ashen Sanderu as the vocalist.

The Soul is a distinct blend of funk, jazz, reggae, blues and even a little rock and roll and has been making waves in Colombo and the South, amassing something of a cult following and creating a name for themselves in the country.

Established in 2014, the band initially and gained popularity by performing covers of reggae classics and a wide variety of other genres until late 2015, when they added originals to their performance repertoire. They officially released a studio album later that year.

A truly original act, The Soul is easily able to create music that's fun, upbeat and gets people moving. Despite their popularity, the band admits that sustaining the band is not easy, especially when the money often lies with mainstream pop music or English covers bands.

“We do go broke sometimes, but we try to sustain ourselves by doing other projects and ventures on the side,” the band told Roar Media. “We look at original music as a movement and an investment, and don’t want to be bound by any rules or standards but our own. Hopefully,  the change that it will bring about is worth the time and energy for now.”

Editor's Note: We have noticed that some of our readers do not agree with the contents of this article. We thank you for your valued feedback and would like to assure you that while this is a roundup of some of the acts we’ve enjoyed the most, it is by no means an exhaustive list—there are a great many other wonderful bands and acts out there, which is truly a cause for great celebration. We hope you are able to enjoy them all!