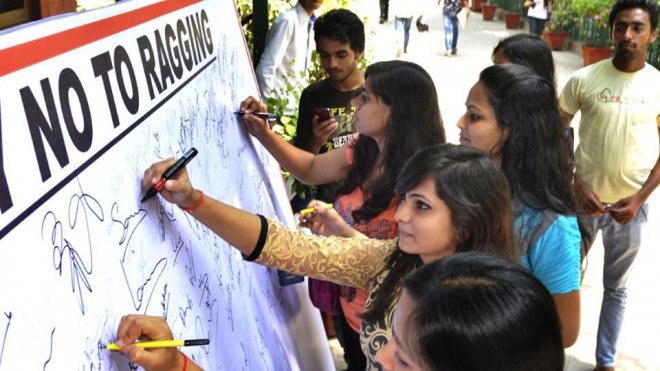 To Rag Or Not To Rag—Is That Still Even A Question?

With the final notes of Rag – The Musical still ringing in the alcoves of Colombo’s Wendt Theatre, the emotive subject of ragging has been bought once more into the public conscience.

Deaths, suicides and serious abuse make up a long list of “major incidents” in this enduring black mark on university life in Sri Lanka. This year, there have been arrests at Peradeniya University and an unpleasant account reported at the University of Trincomalee.

While ragging critics see it as harmful powerplay that needs to be stopped, educational institutions have been criticised for having an apathetic approach towards preventing it and protecting those at risk.

Latent within the abuse are three clandestine common purposes—social, political and sexual—that need to be better understood for workable solutions to evolve.

The advent of ragging in Sri Lanka—and South Asia, more broadly speaking—coincides with the introduction of the British education system.

Today, the exercise of ragging is multifaceted.

At its most innocuous, it may involve a male student being dared to go down on one knee and offer a female student a flower. Other more prescriptive follies include being forced to perform vigorous exercises, wear particular clothes and repeat profanities. However, cases of insults, beatings and “the bucket” are not uncommon. Sexual harassment has also a become a habitual part of ragging.

Universities should be safe and happy haven for students. Image courtesy University of Peradeniya.

However, according to NGO CARE International’s comprehensive 2015 Strategies for Universities, “universities…tend to ignore the practice, notwithstanding its regularity and widespread prevalence, especially in instances such as ragging”.

To find out if this is the case, Roar Media spoke to Dr. Mahees, Senior Student Counsellor and Lecturer at the Department of Sociology at the University of Colombo. He said:

“Severe punishment is incurred to anyone who violates the above law… However, it is apparent that mild forms of ragging does exist… At present there have been few complaints of ragging which been taken to consideration by the university authorities and relevant punishments have been implemented. These complaints have decreased immensely during the recent past.”

Ragging begins during the first week of term when “all newcomers are ordered to memorize the name and hometown of their peers”. Punishments are administered to those who fail the test. The ragging season formally ends with the bucket; an inexpiable exercise in abuse. Here, “the first year students are drenched with putrid water from buckets filled with remnants from the university canteens, sand, dried leaves [and] urine.”

As conspicuous as the bucket abuse is, advocates say ragging serves “to equalise all first-year students regardless of their ethnicity, religion, class, caste and sex.”

“Now most of the university entrants are from the middle and lower classes, [and] from a multitude of backgrounds. They constitute the majority in universities. The minority today is the upper class. There are language, attitude and lifestyle disparities [between the lower/middle and the upper class]. The majority [lower/middle class] want freshers, particularly the upper class to adhere [to their cultural values].”

Ragging in its many guises: a young man is forced to offer a flower to a female as the crowd watches. Image courtesy Daily FT.

Professor Vijaya Kumar, Professor of  Chemistry at the University of Peradeniya, is a public critic of ragging, and he observes that the purpose of the rag is to “humiliate the student and destroy any independent thinking which may lead to a challenge to the student leadership”.

Based on 15 months of fieldwork at the University of Kelaniya (UoK), anthropologist Eshani Ruwanpura’s chapter: Being Ragged: A Rite of Passage into Student Life, pours fresh light onto the political esotericism of ragging.

At UoK, the rag is carried out by the Student Council, which is “almost always” dominated by the political group Ēkābaddha Śiṣya Peramuṇa (a student group affiliated to the JVP, a Marxist political party). Therefore, “it is common to hear senior students singing praises of socialist ideology, in their bid to entice the freshers to come on board,” says Ruwanpura. The ragging process helps the Student Council to “sift through and absorb ‘tough’ members” and snuffle out dissidents, perpetuating their role as political leaders.

Deeply entrenched in freshers’ early university experience are many qualities associated with Marxism: shredding class/caste affiliations, sharing facilities (washrooms, kitchens, bedrooms) and living in close quarters whilst respecting one another.

Political protests and ragging do not have to fall into the same category. Image courtesy Sunday Times Sri Lanka.

According to Ruwanpura, “there is also an unofficial, albeit leading, reason why the rag is carried out by senior male students: it is to find themselves a partner (kokka) from the ‘new ship of goods’ (alut nævē baḍu) which came into the university.” Demeaning language that commodifies the body is common parlance in Sinhala.

NGO CARE International’s comprehensive 2015 Strategies for Universities compiles research that describes ragging as a vehicle for Sexual and Gender Based Violence (SGBV).

One study of 250 students at the University of Colombo showed that 55.6% (72.2% females and 25.2% males) had faced gender-related violence at university. In another study of 283 female informants, 36% said they had been forced into romantic relationships, while 73% knew of instances where girls were forced to continue relationships.

Despite ragging being made illegal in 1997 and various high profile cases and major incidents in the media, ragging persists in universities across Sri Lanka today. Its reasons are manifold.

Dr. Harini Amarasuriya, a sociologist at the Open University, said “There has not been a unified voice against ragging either among the students themselves or the staff or even the administration.”

For a unified solution, Sanjayan Rajasingham, Lecturer at the Faculty of Law at the University of Jaffna, points to the legal commitment in India to finally curb ragging:

“In the Indian state of Kerala a failure to respond to complaints of ragging in a university can result in legal liability for the head of the institution. Perhaps indifference to complaints of ragging should attract some form of legal liability here as well? Maybe promotion schemes should be structured to reward effective responses to ragging? Whatever we do, there must be a system of incentives in place to stir the university staff to action,” he said.

But as ragging is hard to stop, especially when its victims have trouble reporting it, Rajasingham suggests: “Perhaps a better feedback loop and the use of technology is part of the answer—say, a smartphone app that discreetly records and alerts authorities to ragging at private locations.”

Dr. Mahees from the UoC agrees that technology is a positive tool in the curtailing of ragging:

Practical solutions like a smartphone app are a sensible recommendation. But simply believing ragging is on the wane because students today have online social lives—therefore rendering the socialising purpose of ragging redundant—may perhaps be a premature judgment.