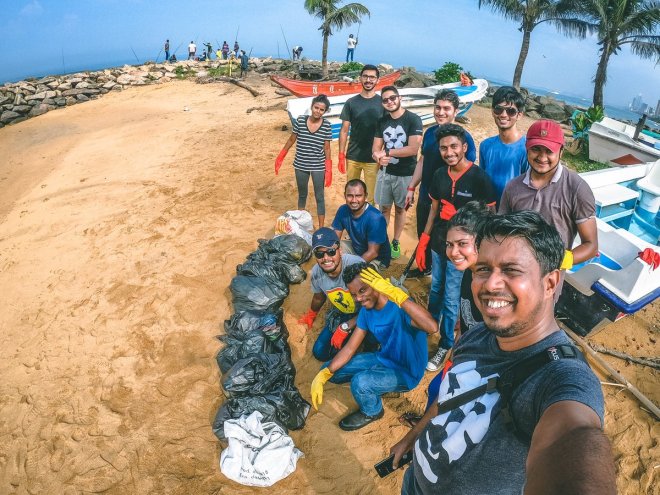 The #Trashtag Challenge: Throwing Our Weight Behind Volunteer Beach Clean-Ups

On March 31, the carcass of a baby dolphin washed ashore on the Kayankerni beach on the East coast, with a piece of polythene in its mouth. On social media, environmentalists and citizens expressed their outrage about the incident. But these occurrences are no longer few and far between. The sheer amount of garbage produced in the country—7, 500 MT daily—coupled with inadequate waste disposal facilities, has adversely affected our ocean’s ecology.

While the government attempts to tackle the problem—the proposed new sanitary landfill in Aruwakkalu has been met with opposition—the Maritime Environment Protection Authority (MEPA) has organised beach cleanups islandwide to reduce the impact of garbage on the environment.

In recent times, beach cleanups organised by volunteers have also become popular, sometimes motivated by viral challenges such as plogging, or jogging while picking up litter, and last month’s #trashtag challenge, in which participants cleaned up locations and posted before and after pictures.

Unlike the many other fun, viral challenges, these called on people to make a practical effort towards a cause, prompting many to clean up polluted spaces in their surroundings. Heeding the call, Roar Media joined the challenge by cleaning the Wellawatte beach a couple of weeks ago. The initiative made it clear that the effort required to clean a beach is a monumental one. With the beach littered with plastic straws, fishing nets, polythene bags, refuse thrown up the ocean, and trash deposited on the beach from other water bodies, a one-time clean-up felt woefully inadequate.

The Scale Of Marine Pollution

According to the findings of the Maritime Environment Protection Authority (MEPA), coastal waste in Sri Lanka consists of 41% plastic, 34% fishing nets, 4% glass and 14% other effluents, with common items being grocery bags, plastic bottles, drinking straws, bottle caps, glass bottles, rigifoam and cigarette butts. It is estimated that Sri Lanka produces 1.59 Million Metric Tons (MMT) of plastic per year, ranking fifth in a global study on the mismanagement of plastic pollution, behind China, Indonesia, Philippines, and Vietnam.

The MEPA’s role in controlling pollution covers Sri Lanka’s 1,640 km coastal belt and extends up to 200 nautical miles into the deep sea, an area that is eight times the size of Sri Lanka’s land area, according to the General Manager, Dr. Pradeep Kumara.

While garbage on the beach is certainly an eyesore, the graver problem is that much of this waste is harmful to marine life. Metal waste and pesticide runoff from farms have been shown to be poisonous to marine flora and fauna. Similarly, sewage affects the balance of chemicals in marine ecosystems, creating a very hospitable environment for algae, but deprives fish and other marine life of oxygen. These chemicals often affect life that other animals depend on, such as coral reefs and seagrass beds.

According to waste audits by MEPA, plastic was revealed to be the most common pollutant. Plastic waste directly harms many ocean animals, such as sea turtles, which can mistake bags for jellyfish. The scale of plastic pollution was made evident in a recent study, in which every marine mammal examined had microplastics in its digestive system.

The projects by private organisations and individuals certainly have a positive impact on the local ecosystem, but locals at these places have found that garbage quickly accumulates once again.

“The garbage that collects on beaches is not merely what is dumped directly on them, but all that is thrown away inland, and which flows to the ocean through canals and rivers,” said Dr. Kumara. He noted that coastal litter becomes more intense after the rains, during weekends and in festival times.

Dr.  Kumara also pointed out that the present laws governing coastal pollution are still largely shipping waste-oriented. “The Marine Environment Protection Act does not recognise a layered fine system ranging from the average individual polluter to the large industries,” he said. “Approximately 90% of the coastal waste actually comes from inland. Added to this is garbage from other nearby countries, such as India, Indonesia and Thailand, which collects out at sea and then ends up on our coasts.”

In addition to sporadic cleanups, MEPA has attempted to create a caretaking system.“In one of our projects, we carried out a full clean-up of the beach and then handed over a 1 km stretch of the beach to one family to maintain. We hope to expand this to 60 families for the first phase,” Dr Kumara said, adding that MEPA was seeking funding for this from the private sector.

“This is an issue that cannot be dealt with using only regulatory measures. It requires a change in our culture,” he emphasised. “Therefore, we must start with the smallest unit, which is our home, so as to address maritime pollution.” Reducing plastic consumption and recycling our garbage can help reduce the problem.

For our part, Roar Media hopes to be involved with more long-term solutions to minimise, mitigate and stem the long-term damage to our environment. You can also join us in our future initiatives. Stay tuned for more details.