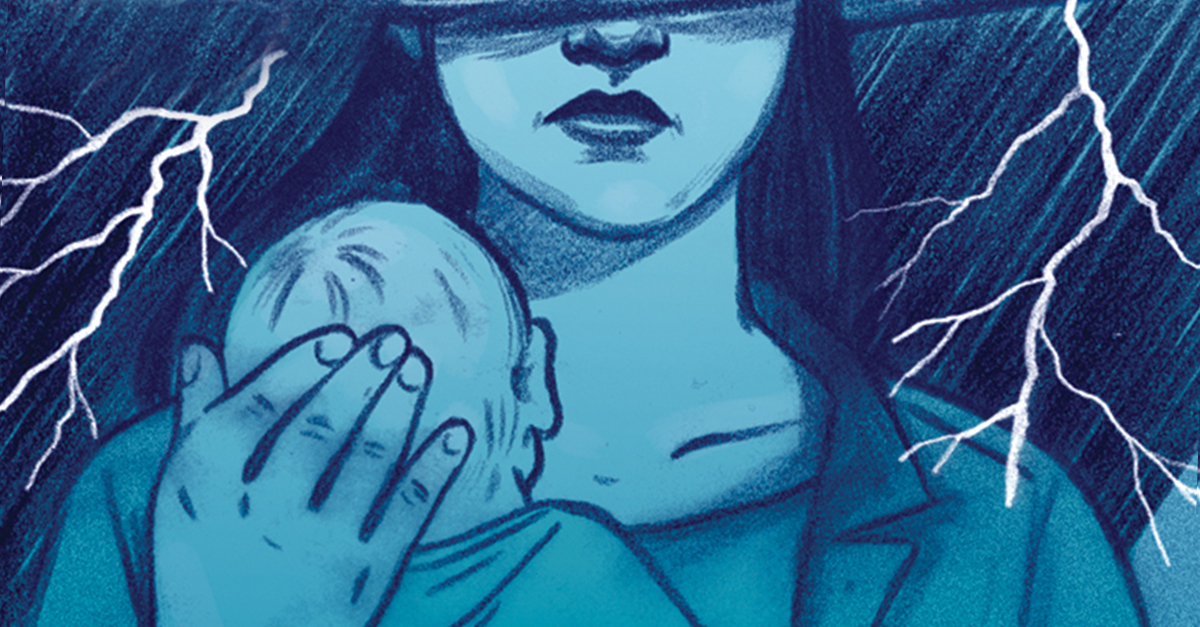 This is a hard story to tell. It was harder to share, she said, let alone retell it.

When Senuri*, 27, found herself pregnant, only a few weeks after marriage, she was furious. From being the carefree girl she once was, Senuri recalls how she became a completely different person. At a time when she was supposed to be elated, she recalled an irksome individual, provoked at the slightest change.

She was pregnant with a honeymoon baby at the age of 26, marooned from what she felt was her freedom and youth, and chained to an immense responsibility. Her anger skyrocketed; she remembered taking it out on her husband for the slightest incident. Things didn’t change even after she gave birth.

After she had her firstborn, she felt a devastating sense of hopelessness.

Even though it was expected of her to be enamoured by the new being she had brought into the world, her own life felt devoid of all reason. Her job lost meaning, her relationships failed to bring her joy and the newborn baby felt like nothing but a burden to bear. Senuri found herself easily provoked, unable to sleep properly, always wanting to isolate herself from her family and friends, and refusing to see the baby. It was clear that she was depressed.

“I hated it when my husband would pay attention to the baby,” she said.

Senuri’s memories, as she recalled to me, were vivid: the disgust that surged when she saw the baby, giving way to bile rising up in her throat. Twice, she attempted suicide. Twice, she failed.

Postnatal depression (PND), also known as postpartum depression, is a feeling of extreme sadness, hopelessness and anxiety, which might interfere with a person’s ability to care for herself or her family, specifically following childbirth. It is classified as a major depressive disorder.

According to psychologist and lecturer Hansini Gunasekara, PND is a common problem. It affects approximately one in every ten women within a year of giving birth. It can also affect fathers and partners. Of those who develop PND, 25 to 50% experience depressive symptoms lasting more than six months.

In Sri Lanka, the prevalence is around 15%, she noted. “Many of the cases, however, go undiagnosed. Therefore, it is difficult to grasp the real prevalence of the problem. There are approximately 380,000 births every year in the country, meaning that 57,000 of those mothers [might] experience PND.”

One of the first Sri Lankan prevalence studies on PND conducted among antenatal and postnatal mothers in Puttalam District indicated a prevalence of 32.1%. A larger study conducted in 166 clusters in 18 districts showed a prevalence of 27.1%, indicating the need for urgent attention towards this acute mental condition in Sri Lanka.

The Very Best Of Maternal Healthcare

Statistics show that despite a developing country, Sri Lanka’s maternal healthcare is on par with that of developed countries. While medical care for mothers is widely regarded as an essential service in Sri Lanka and given due prominence, both socially and in terms of policy, there are some grey areas that have been ignored. The diagnosis and treatment of PND is one such issue.

According to Gunasekara, mental health was introduced as a component of the family health programme under the Family Health Bureau’s maternal and newborn health care policy. Despite this, there is a serious lack of human resources in the healthcare system, especially when it comes to mental health.

Gunasekara says midwives play a crucial role in monitoring the mental health of new mothers. “Midwives are the closest medical officers to patients in certain parts of the country. They build up close relationships with mothers and mothers-to-be. Midwives and maternal healthcare workers now talk about mental health of mothers and babies as part of their prenatal curriculum,” she said.

But there are significant hurdles, such as the availability of trained mental health professionals. Even though psychologists, psychiatrists and counselors can be found in most parts of the country, their numbers are still very low compared to population sizes.  “First of all, the number of psychiatrists and psychologists who could make a correct diagnosis is rather low in the country,” said Gunasekara. “For every 100,000 people, we have six doctors, 14 nurses and 1.6 midwives. This rate is somewhat low compared to other countries in the region.”

For example, India has  4.7 midwives per 100,000 people and Nepal has 2.4 midwives. Interestingly enough, given Sri Lanka’s low birth rate, statistically, the available number of midwives are sufficient to maintain the maternal healthcare system.

Let’s return to Senuri’s story. After giving birth and snowballing deeper into her depressive episode, her parents began to notice her behaviour. She said that her mother was quick to bring her situation to the attention of several medical practitioners. The psychiatrist they first consulted claimed that counselling and therapy would not help her depression.

Senuri was subjected to an assortment of medications, antidepressants and electroconvulsive therapy. She was treated as an outpatient at the psychiatry ward of the Teaching Hospital, Peradeniya. She was administered electric shocks, and then sent home to face her many anxieties.

“It didn’t make much difference to what I was feeling,” she said. “And the environment I was in didn’t help it either. After treatment, I always returned to my husband’s home which was different from what I grew up with. I came from a rather conservative family, which gave prominence to discipline and obeying one’s parents. But my husband’s family was the complete opposite of what I had experienced. They were loud and vibrant.  They argued a lot, they laughed a lot and it was hard for me to empathise. I still loved them but it was difficult for me, to become part of that environment. Even the smallest thing would provoke my anger and I would fall through the same hole once again.”

Subsequently, she stopped psychiatric treatment and opted for therapy. She visited a counsellor for weekly sessions, sometimes alone and sometimes with her mother or husband. Her husband received therapy as well.

Gunasekara noted that both medication and therapy are viable treatment methods for PND. Her advice: “Don’t struggle on alone and hope the problem will go away. It can continue for months or years if nothing is done. Furthermore, fathers and partners can also become depressed after the birth of a baby.”

Paternal Postpartum Depression (PPD) in fathers may manifest in a different way. For example, fathers may abuse substances, or withdraw from their spouses. They may have sudden bursts of anger  and display behaviour that deviates from their usual behavior. Paternal PPD also has negative impacts on the family, including increasing the likelihood of emotional and behavioural problems among their children and conflicts in the marital relationship.

Changes in hormones such as testosterone, estrogen, cortisol, vasopressin, and prolactin during the postpartum period in fathers may be biological risk factors in paternal PPD. Fathers who are exposed to ecological risk factors, such as excessive stress from becoming a parent, lack of social supports for parenting, and feeling excluded from mother-infant bonding, may also be more likely to develop paternal PPD. Support from their partner, educational programmes, policies for paid parental leave, as well as the optional consideration of psychiatric care may help fathers cope during the postpartum period.

On top of all this, there is also the taboo that surrounds serious psychological issues. Senuri was advised by her husband not to tell anyone about what she was going through.  There is a similar silence when it comes to PPD islandwide.

Depression itself is generally a taboo topic. When depression is associated with parenthood, it becomes even more out of bounds.

“The reality of having a baby,” Gunasekara explained, “is that it is a stressful event that can bring forth major changes in life. The only way to address this is by building awareness. The only way to do that is through more research and studies. The numbers available at the moment are rather small and not helpful. We simply have no idea about the true statistics. Lack of awareness means people don’t come to hospitals for treatment.”

Feeling sad at a time when society expects you to be happy is devastating. According to Senuri, no matter how many medications she took to alleviate that feeling, they bore no results. But with time, she has realised that moving ahead is a walk — one that involves taking small steps forward instead of big strides.