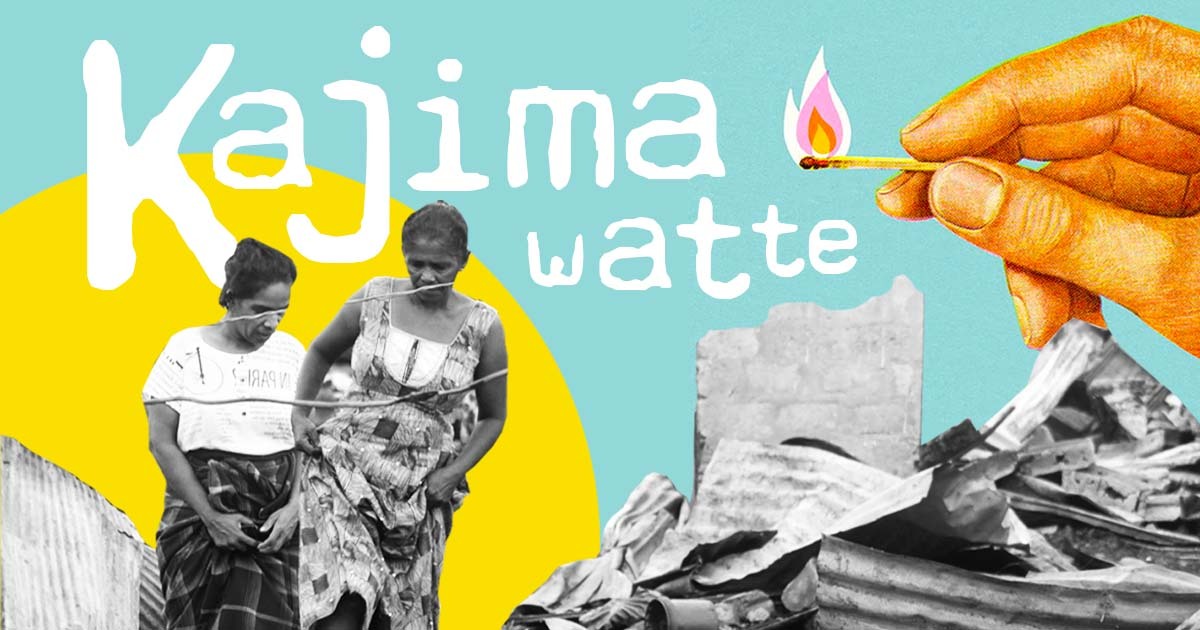 The winding road to Kajimawatte is not paved with cobblestones. On either side of the road are piles and piles of garbage; Kajimawatte borders a garbage dump in which waste collected from the major Grandpass areas is dumped. The people of Kajimawatte don’t seem to live lives too different from the discarded waste —  they too, have been tossed out onto a small plot of land, living on false promises from higher authorities.

The fire erupted on the evening of Tuesday (27 September) — the third one to occur in the span of five years. It spread quickly over the four-acre land, where nearly 300 wooden shacks — initially built to be temporary homes — burned down within two hours.

“It spread like wildfire,” Wijeyanadan (67), a resident, told Roar Media. “We did our best [to stop it], but it spread too quickly with the wind. They [the Urban Development Authority] believe it was an electrical leakage that led to the fire. But we are not scientists, we can’t  say for sure.”

The story of Kajimawatte began when a Japanese company was contracted to renovate the Old Kelani bridge in the 2000s. The many lorries — some of its residents still remember — that were parked in this vacant plot of land during the construction phase, had the word‘Kajima’ painted on them, which is how the area got its name. Before being known as Kajimawatte (Kajima-වත්ත, or kajima-garden), the plot was known as Weligodawatte (වැලිගොඩ-වත්ත) because it was where labourers dumped sand dredged from the nearby Kelani river while renovating the old bridge.

The 300 residents of Kajimawatte who lost their homes in September should not have been there in the first place. A transit site for families originally from other parts of Colombo’s underserved communities whose land was acquired by the Urban Development Authority (UDA) between 2007-2010, they were housed in temporary shacks provided by the UDA until government-built apartments could be allocated to them.

But they told Roar Media that although houses had been promised to them on multiple occasions, they were yet to receive them.

“In 2016, we were asked to leave by the UDA,” Quintus (53), a resident of Kajimawatte explained. “We were asked to come to the UDA, where they promised to give us new houses. But the house that I was promised was given to another person. So I didn’t get a house. Two high-rise buildings were promised to us. But they [the UDA] have kept us here and they’ve closed those [the two high-rise buildings] places up.”

Previously, in 2021, at least 50 houses burned down in a fire in Kajimawatte. Quintus said his house caught fire that time, and during another fire before then, although he can’t recall exactly when the latter occurred.

“Now I don’t have a place to live. I live on the road,” he said. “[But] there are flats which are [still] empty. They were the houses that were promised to us but they still haven’t been given.”

Sudarshani (31) lost her house in the September fire, after narrowly escaping the previous year’s one. “Since we didn’t lose our house in [the 2021] fire, the UDA said we won’t be getting a new one. They told us to stay where we are,” she said. “Everyone talks to us and then leaves. We are the ones who are grieving. Even before I could step into the house to save even one item of cloth, everything was already destroyed.”

But according to Prasad Ranaweera, the Director General of the UDA, all residents of Kajimawatte were provided with homes by 2014. He said, however, that the following year, a number of new illegal settlements had popped up on the land.

In other reports, Ranaweera also said, “We could give a house to homeless people who are really affected. We had earlier settled 20 families on our land, and they are eligible for houses. The others were almost [like] illegal settlers. Our wish is to clear all the land at once, and carry out development projects while taking legal action against illegal settlers.”

The Prime Minister’s inquiry report into the 27 September Kajimawatte fire was handed over to Prime Minister Dinesh Gunawardene in early October, the content of which observed that 214 of the residents who lost their homes in the fire were not eligible to obtain a new house as they do not meet the minimum qualifications required.

But in reality, the situation is far more complex than portrayed in the report. “The UDA has a very black-and-white approach to who is entitled to a house and who is not,” Iromi Perera, researcher and activist for land rights and spatial justice told Roar Media. “This is where things get complicated, not just in Kajimawatte but also in general, with the Urban Regeneration Project (URP) and the way that sort of housing is distributed.”

The complication comes from the diversity within underserved communities; in the case of Kajimawatte and many other similar locales, it is that it consists of people who are on rent, or people who have built an extension to their house and are living separately but don’t have a separate address — all of whom are disqualified for government housing in the eyes of the UDA.

“Kajimawatte is a real mix of [such] people,” Perera explained. “There were renters in other wattes, then that land got acquired and they had nowhere to go because they didn’t get a flat. Then they went to Kajimwatte because it was meant to be like this transition camp. And then you have people for whom the flat was not enough when you have multiple families. So the additional families then went to Kajimawatte until they could appeal and get another one.”

“There was a time in 2013-14, where the URP and its officials just used this land [Kajimawate] like a temporary fix, where they would get people to go stay there. Maybe they never planned to give them flats. It was just a way to get them to leave their watte completely,” she said.

According to the report submitted by the UDA, it was not possible to provide housing to these families in line with the approval policies under the URP. The recommendations of the report — based on claims that the families are illegal settlers — further dampened the residents’ hopes of recovering from these almost annual fires.

“I think it’s very easy for the UDA to say they are illegal settlers and they shouldn’t be entitled to a flat,” Perera said. “How people got there is a lot more complicated than that. If the whole point of the URP is to provide people with better housing, then why are all these people who clearly need housing, disqualified from getting a flat?”

Having lost everything now, many of these residents will either settle somewhere completely different or continue to live at the temporary camps provided by the authorities until they can call elsewhere home.

“All we want is a place to stay now,” Indrani (48), a long-time resident of Kajimawatte, told us. “If they [make us stay in] this place again, there will be another fire, for sure. We don’t want to live here anymore. Anywhere is better than here. We have the clothes on our backs right now, but nothing else. Everything else is gone. All my children’s books and clothes were burned. My grandchildren’s shoes, school clothes, and school bags. They went to school in an old pair of shoes.”