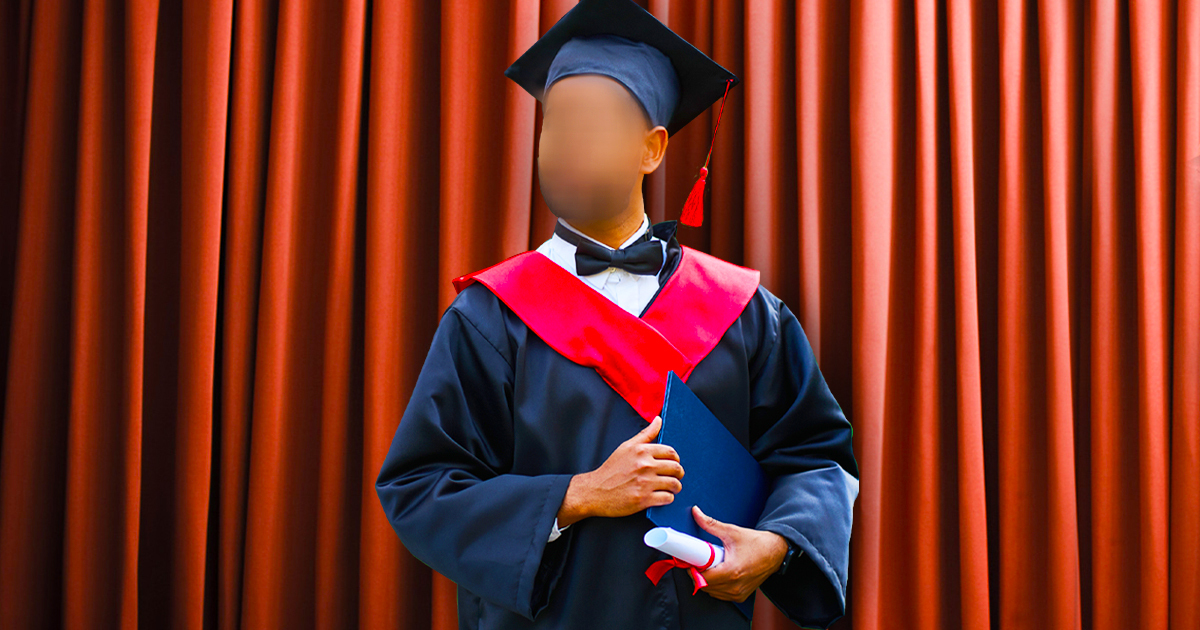 On 5 September 2022, Samith Mapalagama (46), the director of a sanitary ware company, was scrolling through his Facebook feed, when a message popped up. The sender was a local representative of a university based in the US.

His message read: “We offer honorary doctorate degrees. If you are a professional you can get the degree. Next graduation on November 6, 2022 (at) Taj Samudra Hotel. Cost only LKR 390,000. This is [sic] value-added qualifications to your life”.

According to company records in the US State of Delaware, accessed by the author, this university was among three entities that shared an agent based in Sussex, England. All three universities were set up in 2019 – two of them on the same day.

Persuasive messages like the one received by Mapalagama are a testament to a new booming trade: the sale of honorary doctorates and Doctor of Philosophy (PhD) titles without the many years of exhaustive research to obtain such a qualification.

Research conducted by the author found that most self-proclaimed ‘universities’ like these, that are not accredited to run as higher education institutions, operate from countries like India, the US and Nigeria, and sell honorary doctorate titles for between USD 62 and USD 1200 and organise convocation ceremonies for the recipients.

While some Sri Lankans willingly pay for these titles, for purposes of prestige or honour, these ‘universities’ also approach professionals and persuade them to purchase a title to boost their profile.

And in some instances, there are underhand deals as well.

In a WhatsApp communication, the founder of one ‘university’ claiming to be based in India and the US, promises a professional three doctorates in exchange for persuading between 12 to 15 people to buy honorary doctorates from his university for INR 35,000 (USD 438), and to organise a convocation in Qatar or a nearby country.

“What about the event cost?,” the professional who wished to remain anonymous had asked the university founder, to which he had replied,  “you have to organise that”, suggesting the price for a doctorate is hiked to INR 50,000 (USD 626) to cover event costs and  “run the show”.

Just as honorary doctorates are being sold, many entities running operations from India are unlawfully offering online PhDs to candidates outside Indian territory.

“For doctorate programmes, we do not allow online or distance learning. You have to follow those programmes in India,” an official at India’s University Grants Commission told this author.

However, one India-based entity, when approached undercover, said it can issue a PhD certificate in 45 days for INR 85,000 (USD 1065) after a 250-page thesis is submitted.

“You may have [sic] backdated PhD,” the founder of the entity, said in a WhatsApp message. “We will send (the certificate) by speed post or courier”.

Contrary to the general practice of conferring honorary doctorates after a thorough screening, he said his university could sell the title in 30 days. “Only five thousand (INR). Please share your photo and name,” he said.

Another ‘university’ said it would offer a PhD certificate once the applicant submits a 300-page thesis and makes a payment of INR 40,000 (USD 500).

Both entities had not obtained mandatory accreditation from India’s National Assessment and Accreditation Council to run as a higher education institution.

Many of the  ‘universities’ engaged in malpractices which we approached had failed to furnish sufficient details of their academic programmes or their academic staff on their website. Most content available was highly riddled with grammatical errors. There were also insufficient contact details on most of these websites. Although some had opted to include words like ‘USA’ and ‘British’ in their names – in what seemed an attempt to create the impression of a legitimate institution – the addresses listed were not in those countries.

A search on Google Street View on some of these addresses returned results of empty buildings, streets, and bare patches of land that did not even have billboards containing the names of such institutions.

The process of accrediting universities varies in each country. While state authorities are usually involved in the process, some countries — like the US — certify certain commissions to accredit higher education institutions.

However, it is clear that some of these bogus universities pretend to be awaiting accreditation from commissions — which are not even certified to conduct such processes. To further their claim to legitimacy, they often display the ISO 9001:2015 logo on their website – a standard that demonstrates the ability to consistently provide services that meet customer and regulatory requirements. But this logo does not certify that the particular business is accredited to operate as a higher education institution.

Sri Lankan authorities lack the teeth to crack down on entities that offer unrecognised higher education programmes to Sri Lankans directly, or through their local affiliate institutions, as the University Grants Commission (UGC) only oversees academic programmes of state-run universities.

On its website, the UGC says it recognises foreign institutions listed in the Commonwealth Universities Yearbook or the International Handbook of Universities, but the recognition does not “indicate the authenticity of the degree certificate”. This leaves a prospective undergraduate or postgraduate with the responsibility of establishing the legitimacy of such entities.

She added that a bill on regulating all academic programmes, including those offered by foreign universities, is pending cabinet approval and that a commission would have to be set up to look into these matters after then.

“But that is going to take some time,” she said.

While Mapalagama had turned down the offer to obtain an honorary doctorate, many others however continue to claim such titles. “Malpractices in the foreign education sector threaten the well-being of society because it erodes social trust and worsens inequality. Therefore, it’s a must to have a proper system to mitigate these risks,” Mapalagama noted.

Until a proper mechanism is in place to stem such malpractices, the business of selling doctorates will continue to thrive in broad daylight, paving the way for a plethora of concerns in the academic world.