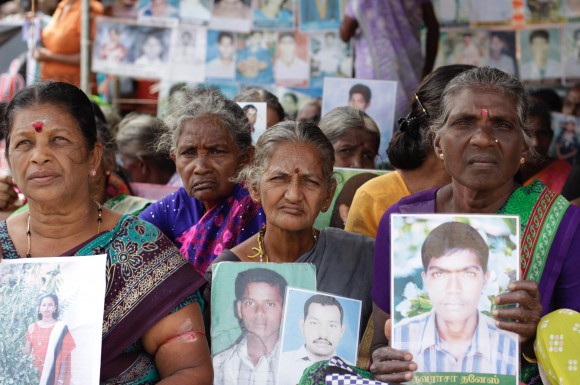 On May 30, around 1,000 protesters from across the North-East, converged with families of the disappeared in Kilinochchi to mark 100 days of continuous protest. In the hands of each protester was a photograph of a missing loved one, held close to the chest like a flimsy shield.

Beginning the day with a sombre inter-faith prayer service, and a moment of silence for those dead and missing from floods and landslides in the South, protesters blockaded the A9 highways for six hours. Their collective demands, as outlined in letters addressed to President Maithripala Sirisena and Prime Minister Ranil Wickremesinghe, were simple:

Leeladevi Anandarajah is a former Assistant Labour Commissioner, coordinator for families of the disappeared in Kilinochchi and mother to Anuraj, who went missing in military custody in 2009.

The last time Leeladevi Anandarajah (55) heard from her son, Anuraj, was a phone call, moments before he surrendered to military custody at Omanthai Checkpoint, on May 15, 2009. At the time, she was worried that he wasn’t eating enough.

A full eight years and two weeks later, the former Labour Department official is now one of the chief coordinators of the Day 100 roadblock—the most recent example of grassroots women-led agitations that have saturated the North-East since the beginning of this year.

But despite the remarkable turnout by families of the disappeared throughout the country, she is under no illusions. “Our struggle continues and our basic demands are yet to be met,” says Leeladevi.

Leeladevi and other protesters flatly rejected attempts by the Kilinochchi Police and the Office of the Governor of the Northern Province to fix a meeting with the Prime Minister’s office, largely due to Ranil Wickremesinghe’s remarks that the disappeared are most likely dead.

Leeladevi was an important coordinator of the 100-day protest and roadblock in Kilinochchi.

Leeladevi also served as Chairperson for the Kilinochchi Zonal Task Force of the Secretariat for Coordinating Reconciliation Mechanisms—the Government body which oversees the yet to be operationalised Office of Missing Persons (OMP).

Mechanisms like the OMP may have worked well enough in other countries Leeladevi says, “but in Sri Lanka, it’s been over a year since the Bill was passed and there has been no progress. If anything, there have been Ministers trying to amend clauses in the Bill or block it entirely.”

In response to the 100-day protest, President Sirisena promised that a Committee would be appointed to investigate disappearances. But with 10 Commissions of Inquiry already in the state’s back pocket, Leeladevi says, “we want to make it clear that we do not have any faith in more committees and commissions.”

Around this time last year, the Sri Lankan Government admitted for the first time that around 65,000 people were missing from the war and insurrections. Truth and accountability continue to be elusive, but Leeladevi maintains faith in the conscience of the South.

When Roar first spoke to Leeladevi in March, she remarked: “The Sri Lankan government has always tried to divide people, but I believe the South would favour us if they knew the truth, after all the working class of the country share the same struggle.”