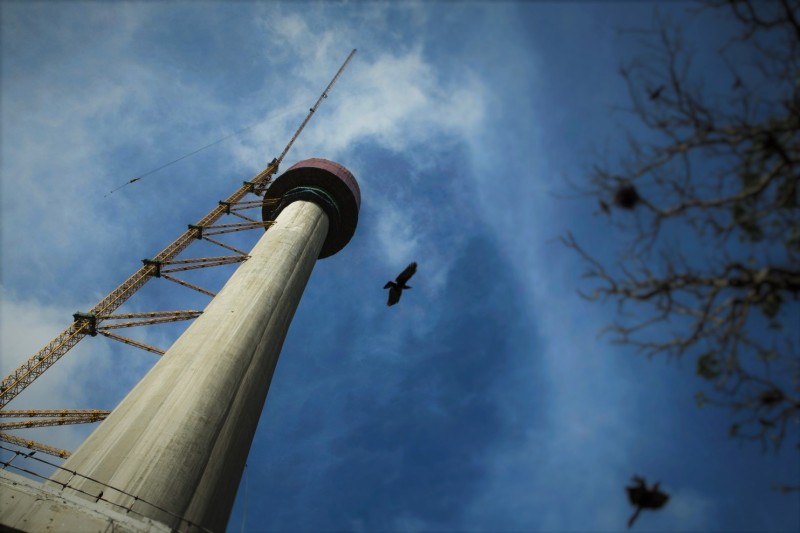 20 Things You Need To Know About Colombo’s Lotus Tower

On a clear day, it’s difficult to miss the yet to be completed Lotus Tower dominating Colombo’s skyline. Although the project has been mired in controversy (and not the Freudian sort), and perhaps because of it, most people seem unsure as to what purpose the Tower will serve. We all know the basics of how the Lotus Tower will be the tallest tower in South Asia – but here’s a list of things about the Lotus Tower which you probably didn’t know, but should know (because let’s face it, whether you like it or not, it’s definitely here to stay).

1. Currently, 292.2 metres (958 feet) of the Lotus Tower, up to the concrete mast, has been completed. The metal mast and the petals are yet to be finished.

2. The entire project is to be completed by October 2017 and the tower will be declared open towards the end of 2017.

3. Once completed, and with the lightning tower in place, the tower will stand at a total of 350 metres.

4. The Lotus Tower, on completion, will act as a transmission tower for TV and radio. The Telecom Regulatory Commission (TRC) informed Roar that the rationale behind the Lotus Tower acting as a single transmission hub is to equalise the quality of transmission and ensure that all consumers have equal access to quality broadcast. This will also ensure that the operations cost of digital transmissions by the current service providers will reduce.

5. Sri Lanka Telecom (SLT) will act as the independent operator, taking over the responsibility to transmit.

6. The first and second floors of the Tower House, at approximately 215 metres and 219.8 metres (705 and 721 feet), are for TV and radio transmissions respectively.

Mid 2014 saw the base being laid out. Image Credit: skyscrapercity.com

7. The Lotus Tower, however, isn’t solely for transmissions. It will be a multifunctional building.  Its three storied tower base will house various shopping centres (mostly high end), food courts, and possibly even a walk-through museum. The tower itself will house banquet halls and an observation deck.

8. According to the TRC, the cost of the tower is covered by a loan from the Export-Import Bank of China. This loan will be paid back with the revenue earned from renting out space.

12. The TRC estimates that by August this year, the ‘petals’ of the tower will be in place.

Once complete The Lotus Tower will dominate the Colombo skyline.

14. During festivities (like Christmas, Avurudu and Eid), the tower will have appropriate decoration displays.

15. The TRC also has plans of building an interactive app to improve visitor experience to the tower. This app will enable users to, for instance, check the availability of seats for a movie and make immediate bookings, or remotely reserve seats at a restaurant. The app will keep the visitor updated about events and attractions taking place at the tower.

16. An entrance ticket will be required to enter the Lotus Tower. Concessions may be granted to school children and families.

17. The outdoor viewing deck, or the observation deck, will be on the eighth floor of the Tower House at a height of 248.2 metres (814 feet). There will also be viewing telescopes.

20. There are plans for a Phase II, which will be built in the same locality as the Lotus Tower. It will house  underground parking for 2,000 vehicles (and will also include parking for daily commuters), a shopping arcade (to cater to all income groups), gyms, swimming facilities, and theatres.

Lotus Tower, a projected image of what it should look like when finished. Image Credit: skyscrapercity.com

With all these plans in the pipeline, the Lotus Tower certainly appears to promise a change in Colombo’s skyline – here’s hoping it will be a change for the better.