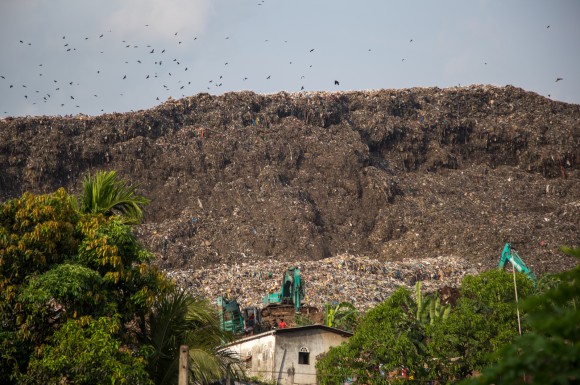 A Brief History Of The Meethotamulla Garbage Dump

Every day the Meethotamulla statistics are being laboriously revised, a backhoe scoop at a time, but now the horror and nausea of the news consumer is being replaced by something like incredulity. If the methane issued early threats and the soft soil shifted houses for months – if the Meethotamulla garbage dump was a time-bomb – why did the residents wait? This is the question now being insinuated. The way to answer this is to ask another question: what exactly is Meethotamulla? Did the garbage come first, or did the people come first?

What today is a sprawling garbage mountain was once a paddy field called Pothuvila, administered by the local Agrarian Services Centre. It had been integral to the livelihoods of villagers in Kolonnawa, with a community of residents subsisting from its produce. However, with the opening of the economy in 1977, farmers found it difficult to compete with the prices of imported rice, and eventually, the Pothuvila farm was abandoned.

Local residents trace their earliest memories of the residential grid that has replaced the Pothuvila farm to the 1970s. As the Colombo District swelled with the influx of economic migrants from rural areas, the land was soon filled with occupants, both legal and illegal. By mid-1980s, the land also proved convenient for the Kolonnawa Urban Council (KUC) to dump the garbage collected within its jurisdiction.

In 1989, Meethotamulla was chosen for then President Ranasinghe Premadasa’s Gam Udawa (Village Awakening) programme. Remembered as one of the most ambitious urbanisation programmes undertaken by the government, the Gam Udawa programme’s purpose was to alleviate the living conditions of suburbs and rural areas by creating townships with comprehensive infrastructure systems. Part of the community at the Pothuvila farm was formalised into a model village called Dahampura, and its residents were given legal title deeds for their land. Another group of the residents was absorbed into the national housing scheme of Pansalhena. However, there remains to this day a portion of dwellers in the area who belong to neither community, and who do not hold legal titles for their land.

Meanwhile, the garbage dump continued to grow. The community had been operating a compost fertiliser plant to cope with the garbage dump; however, it was soon overwhelmed and discontinued. What started as a public nuisance began to cause serious concern.

Images of the Bloemendhal garbage dump, the previous avatar of the Meethotamulla Garbage dump. The government keeps moving around the problem without solving it. Image credits, clock-wise from left: images 1, 3 & 5: The Sunday Times, Image 2: The Nation, Image 4: Daily News

Until 2009, Bloemendhal, Colombo 13, was the site where the Colombo Municipal Council (CMC) had been dumping the garbage collected from the Colombo District. A private company called Burns Trading had been contracted by the CMC for the disposal of Colombo’s garbage, but a legal feud, as well as bureaucratic complications, resulted in the unchecked accumulation of garbage in Bloemendhal. For a long time, residents of Bloemendhal had been mobilised against the dump, which grew in time into a mountainous eyesore. On March 8, 2009, the methane build-up at the garbage dump caused it to explode. It was followed by the partial collapse of the garbage mountain, burying dozens of houses located in its periphery. Fortuitously, the lives of the residents were spared as they were attending a ceremony at the Mahawatte Kovil, nearby. The smouldering fires and the release of methane caused an outbreak of respiratory illnesses among the residents. The incident gave new momentum to the public movement against the Bloemendhal dump site. On March 24, 2009, the Supreme Court ordered that dumping be stopped. However, without Bloemendhal and without a permanent solution for waste management, Colombo’s garbage collection mechanism broke down, and its roads began clogging with artificial banks of garbage. In desperation, authorities decided to add the dump to Kolonnawa, where a garbage mound was already maturing.

In perspective: the height of the present day dump at Meethotamulla

When garbage trucks began arriving from all over Colombo, the residents of Kolonnawa feared a repeat of the Bloemendhal problem. The movement that had been agitating against the growing dump site formalised into the People’s Movement Against the Meethotamulla, Kolonnawa Garbage Dump (PMMKGD), and staged multiple protests. In the resulting legal dispute, the Supreme Court ordered garbage to be deposited in Meethotamulla as a temporary measure and declared an area of two acres for the purpose. However, the same formula of bureaucratic negligence that operated in Bloemendhal obtained here, and the dump grew into a behemoth, covering over 21 acres and reaching up to 300 feet. Journalists reported of an economic subsystem of scavengers and tender profiteers who depended on the garbage dump while residents suffered. As Kolonnawa is veined by the Kittampahuwa Ela, one of the waterways connected to the Kelani River, Meethotamulla is prone to periodic flooding during the monsoons. The floods carried the ooze of black sludge from the garbage dump across households and caused further misery. The Rajapaksa regime relocated some of the unauthorised dwellers in the area to the nearby housing scheme, Sudu Nelumpura, and offered Rs. 1.5 million as an incentive for others to find alternative housing. However, most residents affected by the dump declined the money as it inadequately compensated for their loss and they saw no reason to forfeit their legal title.

The PMMKGD continued to battle the authorities legally, filing Fundamental Rights cases and staging protests. Both the Rajapaksa regime and the current government responded to these protests with either suppression or neglect. The police forcibly dispersed demonstrations and water-cannoned marches. Last year, an unidentified group of thugs attacked a PMMKGD protest and, in an inversion of justice now familiar to Kolonnawa, members of the PMMKGD were arrested. On April 7, 2016, parliamentarian S.M. Marikkar questioned why no solution has yet been devised for the Meethotamulla garbage dump. Deputy Minister of Megapolis and Western Development Lasantha Alagiyawanna answered in this manner:

“There were objections raised against the proposal to take garbage to Puttalam. We have now given our attention to an alternative solution… we are carrying out a tender process of selecting new organisations [to solve the problem].”

When Marikkar pressed Parliament to give an explanation as to why the Government had been inactive though the tenders were received a year ago, Deputy Minister Alagiyawanna replied:

Earlier, in March this year, the methane emissions of the Meethotamulla garbage dump reacted with the extreme heat and caused a fire.

April 14 was the day of Sinhala-Tamil New Year celebrations. At around 2:30 p.m., the residents of Meethotamulla heard an explosion. Shortly afterward, the garbage mountain split in half and slid down, sweeping houses away and burying people underneath. Some witnesses claim that it was accompanied by a sudden tumult of terrain that tossed the houses in the periphery off their foundations, adding to the disaster. Official accounts put the death toll so far at 32, with eight counted as missing. In addition to that, 240 individuals belonging to 61 families have been displaced, and 1,765 individuals belonging to 413 families have been counted within the danger zone or as otherwise affected. The most tragic part of these statistics is that they were completely avoidable.

Go here for Roar’s initial coverage of the disaster, and here for our photostory of the aftermath.