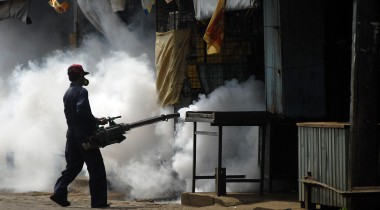 Sri Lanka has seen an unprecedented outbreak of dengue this year, overwhelming hospitals throughout the country.

Since January 2017, the Epidemiology Unit of the Ministry of Health has recorded over 37,000 cases of dengue, more than double last year’s case count of 16,661 for the same period (January to April).

This year has witnessed more than double the total cases of dengue for the period of January to April, when compared to the same period last year.

While fatality rates from dengue are relatively low in Sri Lanka, being about 0.4% in 2016, experts still consider the spread of dengue to be one of the country’s leading public health crises.

Currently, there is no known cure for the mosquito-borne virus. Its adaptability has proven to be a global challenge, and Sri Lanka, too, despite officially eradicating malaria, continues to struggle with the dengue epidemic.

However, this could soon change, with the introduction of what is touted as the world’s first dengue vaccine ‒ Dengvaxia ‒ developed by Sanofi Pasteur, the vaccine division of French multinational pharmaceutical company Sanofi Aventis.

While there are at least least five other dengue vaccines in development, Dengvaxia is the first to be approved and endorsed by the World Health Organisation in April 2016, and has since gone on to be adopted by a number of developing countries.

Notably, Sri Lanka is not one of these countries, and odds are, it won’t see Dengvaxia on the market until at least next year.

Speaking to Roar, South Asia Country Head of Sanofi Pasteur, Jean-Pierre Baylet, argued that “the need for dengue prevention in Sri Lanka is urgent,” going on to say that at-risk populations, “deserve to have a choice to be protected against the disease with a well-tested vaccine.”

A box of Dengvaxia being shown to AFP reporters at a hotel in Mexico City. Image credit: AFP

In June last year, an official application for the approval of the sale and use of Dengvaxia in Sri Lanka was submitted to the National Medicines Regulatory Authority (NMRA) ‒ Sri Lanka’s official regulatory body for pharmaceuticals.

Despite repeated inquiries, officials at the NMRA refused to share information regarding the application for the use of Dengvaxia. However, NMRA CEO Dr. Kamal Jayasinghe told Roar that Dengvaxia was currently being reviewed by an independent committee.

According to Baylet, the NMRA informed Sanofi Pasteur in March 2017 that, “the decision to grant marketing approval [for Dengvaxia] will be held back for one year to obtain post-marketing surveillance data from countries which have already launched [the vaccine].”

Baylet, however, assures that the vaccine is market-ready, having undergone vigorous tests and studies before being licensed in countries where dengue is a serious epidemic.

“We have long-term data on the safety of our vaccine for six years post-vaccination from the first efficacy study, and for five years from the phase III studies,” said Baylet, adding that each study revealed, “a continued reduction of hospitalised dengue cases.”

“Disease impact modelling indicates that if 20% of the population is vaccinated in the 10 endemic countries that participated in the Phase III study programme… it could potentially lead to a 50% reduction in dengue burden in these countries over five years,” Baylet claims.

Dengvaxia, the world’s first dengue vaccine, is administered in three doses over a year. Studies have shown it is effective up to four years from the administration of the last dose. Image credit: AFP

While the prospect of a dengue vaccine is sure to excite many in Sri Lanka, Dengvaxia does come with its own set of caveats and by no means guarantees a total eradication of dengue.

According to Dr. Janakan Navaratnasingam, who is the Focal Point for Communicable Disease for the Sri Lanka office of the World Health Organisation, Dengvaxia works best in areas where “a good number of people are getting the disease.”

Luckily (or perhaps unluckily) for Sri Lanka, it is most likely to meet these criteria. However, despite this, the vaccine itself is not known to be 100% effective, especially compared to other popular childhood vaccines.

“The amount of protection provided [by Dengvaxia] depends on the prevalence of the disease in a particular country. Complete protection is currently not possible,” explains Dr. Janakan.

The WHO official also expresses concern that “Parents who get the vaccine for their children might get a false sense of security and therefore place less emphasis on environmental preventative measures.”

For dengue, children especially are a high-risk group, being most susceptible to contraction of the disease and suffering the highest rates of mortality. As an individual ages, their resistance to the disease increases, and the odds of fatality from dengue decreases.

This puts another spanner in the works for Dengvaxia’s approval process, as it is currently recommended only for children over the age of 9, by manufacturer Sanofi Pasteur, thereby leaving out the most vulnerable segment of the population.

The Dengvaxia drug itself has to be delivered in three doses of 0.5 ml, one every six months. This poses unique challenges for Sri Lanka’s health care system, as implementation of the drug would require stringent monitoring programmes to ensure that patients receive all three doses over the course of a year.

Explains Dr. Janakan, “Children will have to be monitored because there is no point in delivering the vaccine if it is not followed up with a second and third dose. The NMRA will likely have to assess whether our private sector has the capacity to monitor and ensure full dosage delivery to all patients.”

What Could It Cost?

WHO’s Dr. Janakan tells Roar that Dengvaxia is known to be a fairly expensive drug. Sanofi Pasteur officials, however, declined to provide a breakdown of the cost of the drug, in the countries where it has been approved.

“In all the countries where we have conducted cost-effectiveness analysis studies to date, Sanofi Pasteur’s dengue vaccine has been shown to be cost-effective and even cost-saving, according to the WHO criteria, which accounts for GDP of the country and, hence, affordability,” says Baylet.

Regardless of the cost of Dengvaxia, Dr. Janakan explains that any approval of Dengvaxia by the NMRA would likely lead to a public demand for the vaccine to be provided free of charge by the state.

“To the best of my knowledge, the vaccine has mostly been vendored through the private sector in the countries where it has been available,” says Dr. Janakan.

However, given Sri Lanka’s relatively progressive health care system, Sri Lankan citizens are far more likely to expect vaccine services of this kind from the state, when compared to their regional counterparts.

But any conversation on the pricing of Dengvaxia, and state involvement in leading a dengue vaccination initiative, will have to take a back seat until the NMRA finally arrives at a conclusion on the approval of the drug in Sri Lanka.

“It will still be some years before we see the full effect of Dengvaxia,” says Dr. Janakan. In the meantime, he states that the “NMRA will have to study all the factors that influence the efficacy of vaccine before making a decision.”