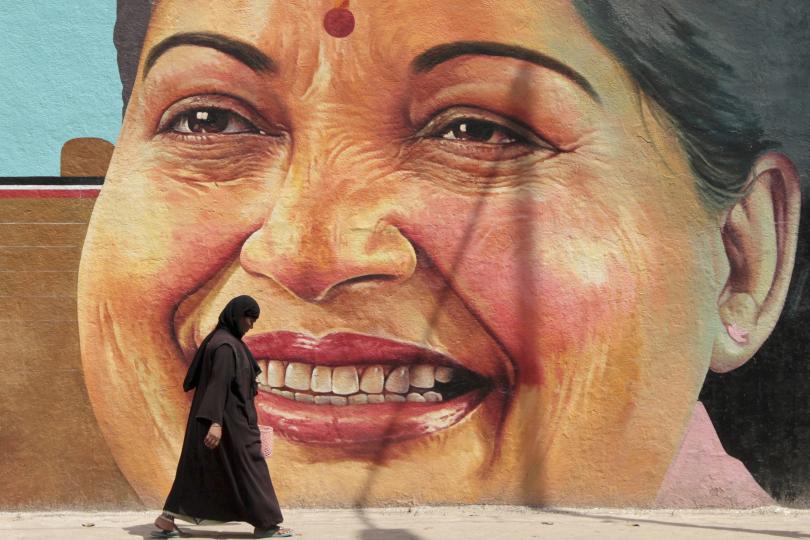 For the Indian media, it’s probably routine to report on Tamil Nadu’s Chief Minister Jayalalithaa (fondly referred to as ‘Amma’) writing to the Indian premier about the arrest of Tamil Nadu “fishermen” by the Sri Lanka Navy. Her claims often include that the arrest of the “fishermen,” fishing in “historic waters” is a “humanitarian issue” and is “inhumane”, despite the fact that there is a clear trespass by these said fishworkers into Sri Lankan waters. The topic also keeps surfacing at bilateral talks between the two countries, but for all the attention and coverage it receives, a closer examination of the actual issue reveals that there’s a lot more to it than Amma presents.

Bottom trawling – a highly destructive fishing method – is not what most would have in mind when talking about “fishermen.” The truth is, the arrests made by the Navy are those of the trawler skippers  and the labourers working on board – not of “Tamil Nadu fishermen” in a traditional sense, a distinction which needs to be made. Tamil Nadu “fishermen” using “traditional” fishing equipment, to begin with, would never be able to cross the maritime border into Sri Lankan waters. The “fishermen” working on board the trawlers are not all fishermen by profession; many are migrant labourers from various parts of India, according to activists Roar spoke to. It has also been found that children have been employed on board Tamil Nadu trawlers: underage, child labourers are not “fishermen”, an urgent issue the Indian and Tamil Nadu governments should be looking into.

Trawlers dredge the seabed and harvest fish indiscriminately (of the catch, only 10% may be the target species, which is mostly prawn). Trawling damages the broader marine environment, including the seabed and the marine ecosystem. In the process of trawling, the trawl nets also damage and destroy fishing equipment, and thereby the livelihoods of small-scale and traditional fishermen. And this happens on both sides of the international maritime boundary line: unregulated trawling by Tamil Nadu trawlers in Tamil Nadu waters and illegal trawling in Sri Lankan waters destroys the livelihoods of not just Sri Lankan fishermen but also Tamil Nadu small-scale, traditional fishermen. The voice of traditional small-scale fishermen in Tamil Nadu is yet to be heard at all in this debate.

How bottom trawling works, and the damage it causes.

The marginalisation and ultimate destruction of traditional, small-scale fishing in the North is something the Sri Lankan Government must take keep in mind when addressing India’s request to legally allow a number of Tamil Nadu trawlers into Sri Lankan waters. Legalising Illegal, Unreported and Unregulated (IUU) fishing by Tamil Nadu trawlers in Sri Lankan waters will not change the fact that trawling is a destructive fishing method which affects the marine ecology and the livelihoods of traditional, small-scale fishermen.

Contrary to the oft touted slogan that the arrests of Tamil Nadu fishworkers are a “humanitarian issue,” Dr. Steve Creech, an independent fisheries researcher and Director of Pelagikos Pvt. Ltd., points out that from a Sri Lankan perspective, this is primarily a livelihoods issue for northern Sri Lankan fishermen, and not just a humanitarian issue for Tamil Nadu fishworkers alone. Tamil Nadu trawlers enter Sri Lankan waters thrice a week, often coming within 500 m of the Sri Lankan shoreline. To avoid damage of nets and equipment, the small scale, traditional Sri Lankan fishermen avoid fishing on Monday, Wednesday and Saturday evenings, which means that they lose three days’ income every week. According to a report published by Dr. Muttukrishna Sarvananthan, Director of the Point Pedro Institute for Development Studies in Jaffna, the average annual losses incurred by small scale fishermen in the north amounts to US$ 41 million or Rs. 6 billion every year. This, it should be noted, is a modest estimate – it does not include the damage to the ocean, the damage to fishermen’s gear and nets, the opportunity cost of the bycatch harvested indiscriminately by Tamil Nadu trawlers, and Sri Lanka’s lost revenues from seafood exports as a result of Sri Lanka’s marine resources being landed at and exported from Tamil Nadu.

Where fishing and fishing rights are concerned, it should be noted that trawling is in no way a “traditional” fishing method. The first Indian trawlers were funded by a Government of Norway aid programme back in the 1960s and introduced to Kerala as part of the Indo-Norwegian Project (INP).  Trawling is a modern, not a traditional, method of fishing.

This is not what traditional fishing boats look like. Image courtesy: newindianexpress.com

This is what traditional fishing boats look like. Image courtesy: wikimedia.org

‘Historic waters’, as defined by the French historian Bourquin, are based on “a combination of geographical, political, economic, historical and other circumstances.”* However, after maritime boundaries were drawn up and demarcated according to the UN Law of the Sea in 1972, the idea of ‘historic waters’ needed updating. In the Palk Bay, the Indo-Sri Lankan fishery dispute unfolds against what are now legally known as “internal waters,” rather than “historic waters”, negating the question of Tamil Nadu fishermen’s right to fish in historic waters. Sri Lanka’s internal waters in the Palk Bay fall under the sovereignty of the state, and are therefore governed by the laws of the Sri Lankan Government.

Pictorial representation of South Indian trawler movements across the International Maritime Boundary Line (IMBL), based on RADAR images gathered and analysed by the Sri Lanka Navy in 2012.

It is crucial to understand that according to Sri Lankan laws, fishermen and trawlers who are not Sri Lankan are not allowed to fish in Sri Lanka’s internal waters. Amma’s claims about historic waters and traditional fishing rights are both outdated and irrelevant in the modern day legal context of the Laws of the Seas.

A single exception has been provided for in the maritime agreements signed between Sri Lanka and India in 1974 and 1976, and that relates to the feast of St. Anthony on the island of Kachchativu. In February every year, thousands of Indian devotees are allowed to cross over to Kachchativu. In addition, Tamil Nadu fishermen are legally allowed to dry their nets on the island of Kachchativu, but no longer have the need to do so, as cotton nets have been replaced with quick drying nylon nets.

Allegations Against The Sri Lankan Navy

The Sri Lankan Navy is under constant fire by the Tamil Nadu government for arresting Tamil Nadu trawlers for fishing illegally in Sri Lankan waters, despite the fact that the Navy is simply protecting Sri Lanka’s maritime borders and upholding Sri Lanka’s sovereignty by doing so. Some of the allegations levelled against the Navy include arrests of “innocent fishermen” and claims that they beat, shoot and kill these “fishermen”.

Having earlier established that these are not in the strictest sense “fishermen” working on Tamil Nadu  trawlers, but daily wage labourers, the question of innocence is also debatable. Thiyagaraja Waradas of the Department of International Relations at the University of Colombo, points out that Tamil Nadu trawlers have been alleged to actually offer monetary incentives to “fishermen” working on their trawlers, to fish illegally in Sri Lankan waters. Tamil Nadu trawler owners actively encourage their vessels to cross the international maritime border. This trespass is a conscious decision and not in any way “innocent”.

With regard to the deaths of innocent Tamil fishermen that is constantly pinned on the Navy, Waradas notes that this took place during the Sri Lankan conflict. There have been no reported deaths since the end of the conflict, he said. Furthermore, it has never been established that the Navy alone was responsible for these deaths. It remains unclear to this day if the deaths of Tamil Nadu fishermen that occurred during the civil conflict were caused by the Sri Lanka Navy or the LTTE. Before 2009, the waters into which Tamil Nadu trawlers were crossing was clearly demarcated as a conflict zone. On the Sri Lankan side, there was a ban on operating fishing boats in these areas between 6 p.m. and 6 a.m. every day. The fact that Tamil Nadu trawlers chose to cross the maritime boundary was in contravention of the prohibition on fishing imposed by the Sri Lankan security forces and the LTTE. As a result, Tamil Nadu trawlers could have been shot at by either party, given how fragile and volatile the situation was at the time. Thus no one is really certain who is to blame for the deaths of Tamil Nadu fishermen leading up to 2009. Dr. Creech also pointed out that it remains unclear if they were fishing or smuggling ammunition, supplies and cadres for the LTTE.

There have also been incidents, although isolated, where Tamil Nadu fishworkers have reacted aggressively against the Navy. According to Navy spokesperson Captain Akram Alavi, there were a few remote incidents last year where the Tamil Nadu trawlers were “aggressively maneuvered” towards Navy boats ‒ hardly an act of innocence, it should be said.

Roughly 436,000 km²* of maritime space is under Sri Lanka’s national jurisdiction ‒ this includes the island of Kachchativu, settled under the agreements signed between Sri Lanka and India in 1974 and 1976.  The legal status of Kachchativu is another device used often by Tamil Nadu’s Chief Minister in her political discourse on the Indo-Sri Lankan fishery issue. Amma’s disinformation serves simply as a distraction from the real issue, that of illegal fishing by Tamil Nadu trawlers in Sri Lankan waters, and is intended to further confuse an already confounding debate. Kachchativu, which is located off the southern tip of the Jaffna peninsula, was administered by British Ceylon prior to Indian Independence in 1947 and Sri Lankan independence in 1948.  At Independence, and then again after the maritime boundaries between the two countries were drawn in 1974 and 1976, Kachchativu was included on the Sri Lankan side of the International Maritime Boundary Line (IMBL) demarcated between the two countries. W. T. Jayasinghe* notes in his comprehensive account of the two negotiations ‒ The Maritime Boundary of Sri Lanka ‒ that even as early as 1923, “the (British) Government of India accepted Sri Lanka’s (then British Ceylon) claims to Kachchativu” and “…in a letter dated 8 March 1923 made this situation clear to the British Government of Madras.”

Jayalalitha’s persistent denunciation of the Union Government in New Delhi and the Central Government in Colombo over the ownership of Kachchativu is as futile as it is legally flawed. Amma’s cry for Kachchativu does nothing to further a solution to the issue – nor is it intended to do so. Even if the Government of Sri Lanka was to give up Kachchativu and gift it to India, Tamil Nadu trawlers fishing off the coast of Kalpitiya, Pesalai, Delft Island, Kayts, Kankasenthurai, Point Pedro, Mullaitivu and Pulmoodai would still be fishing on the wrong side of the IMBL ‒ the crossing of which is, indisputably, an act of IUU fishing.

It was recently noted in The Sunday Times that Amma frequently pulls out the Kachchativu card at the peril of other, unaddressed issues in Tamil Nadu, including the dismal state of the storm drainage in Chennai and other parts, which amplified the effect of the catastrophic floods last December. Kachchativu isn’t the only card Amma uses, however ‒ misinformation on a number of key issues, including the illegal nature of trawling and the crossing of the IMBL, are offal she throws at the general public, which do nothing but add confusion to the debate. The Sri Lankan Government would be wise to take more than a cursory look at the issue and take a stronger stance ‒ Tamil Nadu trawlers stealing the livelihoods of thousands of Sri Lankans and destroying our maritime resources isn’t something that should ever be dismissed, or taken lightly.