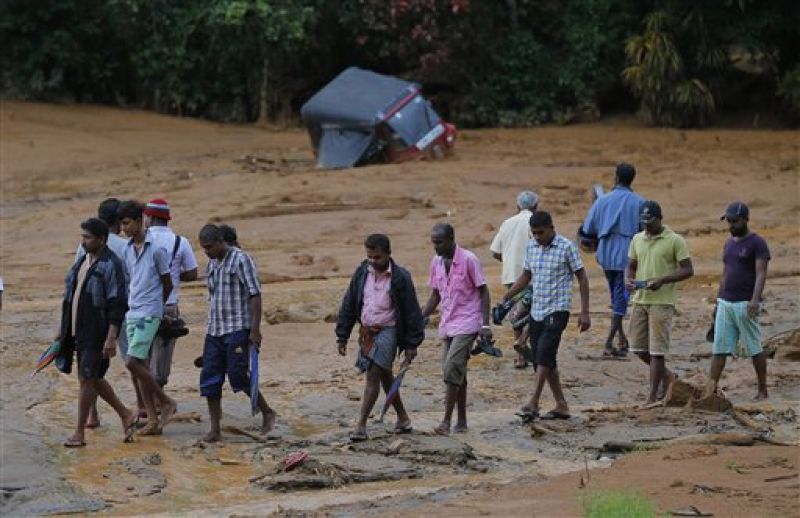 As they say, when it rains, it pours. All through April and half of May we were subjected to unbearable heat and humidity, but just two weeks ago we faced the very opposite: rains. Lots and lots of them. Although it is not uncommon to expect rains at this time of the year, what we experienced over the past few weeks was heavy and steady rainfall, strong enough to cause total mayhem within the country. While floods disrupted the peace in the lowlands, the hill country  faced its own version of the nightmare ‒ landslides. Many minor scale landslides and slope failures were ‒ and still are ‒ reported, or expected, from different parts of the country, and the most devastating of it all was reported from Siripura, Aranayake, in the Kegalle district.

Disaster befell the peaceful Siripura‒Elangupitiya hill at Aranayake between 4:30 and 5:00 p.m. on Tuesday, May 17, when a sleeping monster was awakened by the relentless rain. We don’t expect to repeat the horrid statistics every media outlet has already covered blow by blow, of how many bodies have been pulled out, how many are still believed to be lost beneath what used to be half of the mountain, or how many were left homeless by the disaster. Rather, we thought to take a look at how this particular mountain came alive, after being dormant for so many years.

What Exactly Is A Landslide?

Apart from floods, landslides are the most catastrophic natural disaster to strike Sri Lanka. Tragedies at Koslanda and Meeriyabedda are sad examples of such occurrences in the recent past. A landslide, in a scientific sense, could be defined as a movement of a mass of rock, debris, or earth, down a slope. That being said, let’s take a look at how and why such movements occur in soil slopes.

Landslides could be triggered due to a number of reasons, because of natural phenomena like earthquakes, volcanoes and heavy rainfall, or sometimes simply due to human activities. Since we are blessed with zero volcanoes and hardly any earthquakes, almost all the naturally occurring landslides in Sri Lanka are triggered due to heavy rainfall. However, even if there are plenty of rains, landslides won’t occur down every mount and hill on the island. Other conditions have play a part, too. The influence of elements like slope angle, water content, vegetation cover,  or soil strength, could render a slope unstable, and excessive rains can trigger/initiate landslides in unstable slopes.

This is how it happens: rainwater, once infiltrated into the ground, exerts a pressure (we call this pore water pressure) on the soil matrix. This pressure, once increased with more and more water infiltration, is not too healthy for the stability of the slope. At some point, it could all give way when the pressure built within is too much for it to bear. This could happen both due to short-lived heavy rainfall, as well as prolonged low intensity rainfall, since the total water accumulation within is what matters here.

In some cases, we get to see warning signs of a landslide, signalling that a disaster is looming, ages before it may actually happen, giving us time to be prepared or avoid the impending danger. However, things are not always that straightforward, and this is why landslides are tricky and complex things to predict. For example, a slope may gradually become vulnerable due to its geological and physical characteristics or rash human activities without a hint of this being visible on the outside ‒ like a monster biding its time in silence, waiting for the opportune moment ‒ until heavy rain suddenly sets it off, and most of the time, nobody exposed will live to tell the tale.

Hence, the sudden increase of saturated pore water pressure within a soil slope, coupled with the necessary conditions, could bring very sudden, ugly, and unfortunate results.

According to the expert views of the professionals at the National Building Research Organisation (NBRO), including professors and scientists, this is more or less what happened at the Siripura‒Elangupitiya hill, Aranayake: heavy rains that fell for four long days infiltrated right into the soil matrix, which soaked up the water like a sponge, until all hell broke loose in the form of a disastrous debris flow.

But you cannot blame the rains alone; many factors contributed to the landslide. For example, the soil cover of this particular area had been pretty thin. In such cases, the  rainwater infiltration could be super fast, and the destabilising force generated within the soil mass due to the increased pore pressure that results is equally sudden.

What made matters worse was the particular shape of this soil slope; it contained two steep inclines or escarpments at the top and mid levels with a gently sloping area in between the two. The material that broke loose from the top, including trees, boulders, soil and split rock fragments, travelled down the first escarpment and hit this flat region several times faster and stronger than it would have done with a less steep slope.

This impact was strong enough to dislodge the loose and already saturated soil cover in the flat region. Material from the top escarp, debris from the destroyed houses and properties, along with the dislodged colluvium, all combined to send a huge debris flow down the second escarp, leaving nothing alive or standing in its wake.

After burying parts of three different villages, the remnants of the debris flow finally took refuge in the plains beneath the hill, covering up the paddy lands in layers and layers of mud.

The danger threatening the general vicinity of the Siripura‒Elangupitiya hill has not died down yet. There is a high possibility of further slope instabilities at both sides of the landslide scar, and unsurprisingly enough, more landslide occurrences followed this major one. One which took place at the other side of the hill was reported as recently as last Sunday (May 29).

Lessons To Be Learnt

While we cannot control rains, nor can we stop sudden disasters like this from happening, there still are some things we can learn from this tragic incident, because, most of the time, it is our own fault why dormant hill slopes suddenly decide to wake up.

For example, improper land use patterns play a major role in creating high water infiltration. The crown area of the landslide, that is the topmost region of the destabilised area, used to be a tea estate. The slope area had been heavily scattered with garden cultivation as well. Human activities like removal of natural vegetation cover, obstructing or altering natural water drainage paths, unloading the foot of the slope and overloading the top, are among many other reasons why slope instabilities occur in mountainous regions. If you look at the photos from Aranayake carefully enough, you may realise how areas with a natural forest cover stay safe and intact in and around the landslide scar.

The NBRO is the government body in charge of looking into landslides and slope instabilities. This means that many responsibilities, including monitoring and forecasting landslides, and warning people when a landslide is about to happen, fall on this organisation.

Most of you might be surprised to learn that 20% of the total land cover is identified to be under risk of landslides as of today, according to the NBRO. Currently, 10 districts are supposed to be landslide prone areas, occupying 30% of the total population of the country. This is a good indication of the magnitude of the problem, and it goes without saying that the general public has an equal role to play by staying alert and being aware of the situation so as to cooperate with the Government, and basically, to stay safe. So proper awareness is the key.

Here are some basic, but important, rules of thumb anyone living in a hilly region should be aware of:

Obviously, there is a physical limit to what we can do against the mighty force of nature. It is almost frightening what little our sophisticated instruments and modern technology could do when nature decides to strike back like this. Since what is left at the Siripura‒Elangupitiya hill at Aranayake now is still unsafe and will continue to be so for some time, visiting the area to understand the gravity of what happened will not be possible. But, anybody who has visited the Meeriyabedda area would agree how tiny, insignificant, and helpless you feel when you stand beside a tragedy like this, beneath the formidable looking mountains, beyond the lush greenery that became a silent graveyard to many.