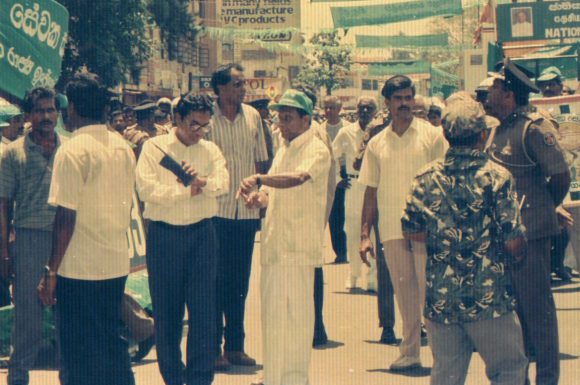 The answer to the question “how many prominent Sri Lankans have been assassinated?” should always be “too many,” but there have been a handful of politically-motivated killings that well and truly changed the course of this nation, for better or for worse. While all of them are important in their own way for any number of reasons, in the interest of brevity, we shall attempt to list out some of the more monumental of these cold blooded murders.

Solomon West Ridgeway Dias Bandaranaike was the Prime Minister of the People, the undisputed champion of the Sinhala Buddhist cause. Having come to power on a nationalist platform of sanga, weda, guru, govi, kamkaru in 1956, no one imagined that his life would come to an end at the hands of a Buddhist monk that embodied the very values of the Sinhalese masses that Bandaranaike so ardently espoused.

When Talduwe Somarama Thero, an ultra-nationalist Buddhist monk who served as a lecturer at the Ayurvedic College, pulled the trigger on that fateful morning in 1959 to end the life of what he thought was a traitorous leader who had betrayed the Sinhala Buddhist cause, he probably had no idea he was just a pawn in a larger, more sinister game.

Enter Mapitigama Buddharakkita Thero, the then influential Chief Incumbent at the Kelaniya Raja Maha Viharaya, without whose support the Mahajana Eksath Peramuna coalition would never have gained power as easily as it did. Resentful of Bandaranaike for his refusal to hand over a lucrative shipping contract to his associate H. P. Jayawardena, Buddharakkita together with Jayawardena plotted the country’s first high profile assassination; and the rest, as they say, is history.

Somarama Thero being led away from court after his conviction. Image courtesy sangam.org

Investigations revealed the duo’s guilt beyond reasonable doubt; however, in a highly publicised trial that spanned several years following the demise of Bandaranaike, both Buddharakkitha and Jayawardena managed to escape the death penalty thanks to a legal loophole that prevented those accused only of conspiracy to murder from being sent to the gallows. In a gross miscarriage of justice, each was sentenced to life in prison instead. Somarama, who by this point had left priesthood, was not so lucky. He was hanged on July 6, 1962.

Bandaranaike’s assassination paved the way for the ascension of his widow Sirima Bandaranaike, whose two terms in the 1960s and ‘70s had a lasting impact on the country’s future (to put it mildly).

Arguably Sri Lanka’s biggest film star of all time, Vijaya Kumaratunga was well on his way to becoming a political force to be reckoned with when he was brutally gunned down by unknown assailants (at the time) in February, 1988. Shot in the head with a T-56 assault rifle outside his residence in Narahenpita by one Lionel Ranasinghe alias Gamini, Vijaya’s death sent shockwaves around the country, reportedly resulting in 12 suicides in response to the news. It was a testament to the actor’s immense popularity that Kumaratunga’s funeral broke records for public attendance to a state funeral. It was also the first ever funeral to be telecast live on state television.

Preliminary investigations revealed that Lionel Ranasinghe had shot and killed Vijaya Kumaratunga on the orders of the Deshapremi Janatha Vyaparaya, a vehemently anti-Indian organisation affiliated to the Marxist and (at the time) ultra nationalist Janatha Vimukthi Peramuna.

While the reasons, and indeed the culprits, are disputed, on the day of Kumaratunga’s funeral, the DJV issued a leaflet discussing the reasons for his assassination – chief of which was his support for the highly controversial Indo-Sri Lanka Accord signed in 1987, and the Indian Peace Keeping Force (IPKF) and the Provincial Councils that came in its wake. He was even accused of being a CIA agent.

Over a decade later, Kumaratunga’s widow and former president Chandrika Bandaranaike Kumaratunga appointed a Presidential Commission to investigate the murder, which reportedly concluded that the assassination had, in fact, been the work of the then UNP government, with fingers pointed at President Ranasinghe Premadasa and Defence Minister Ranjan Wijeratne in particular. This claim, however, is hotly debated to this day.

Former Cabinet Minister of Trade, National Security, Agriculture, Education and Deputy Minister of Defence Lalith Athulathmudali was a powerful and influential figure in the J. R. Jayawardene cabinet and, in later years, undeniably proved to be a thorn in the side of the powers that were.

Ever since he lost the UNP’s 1988 presidential nomination to Ranasinghe Premadasa, relations between the two were strained, to say the least. Following his resounding victory, Premadasa demoted Athulathmudali to Minister of Agriculture, and then Minister of Education. Things escalated when he tried to have Athulathmudali removed from key party positions and, finally, accused him of having been responsible to the burning of the Jaffna Library.

Just weeks later, in April 1993, while speaking at an election rally, Athulathmudali was assassinated by an unidentified gunman.

A Tamil youth named Ragunathan was found dead in a ditch nearby ostensibly having taken his own life by swallowing a cyanide capsule, and the Government wasted no time in pinning the blame on the LTTE.

A presidential commission appointed by Former President Chandrika Bandaranaike Kumaratunga, however, concluded that the cyanide had been forcibly administered on the suspected shooter and in its report pointed the finger at then President Premadasa. Some security personnel as well as a few prominent underworld figures including the infamous Sotthi Upali were subsequently arrested in connection with murder ‒ a few of whom were killed during prosecution by rival underworld figures.

Athulathmudali’s assassination remains one of the most mysterious political killings of independent Sri Lanka.

To say that Ranasinghe Premadasa was a controversial figure would be an understatement. In both life and death, Premadasa proved to be a force of nature, changing the fate of the country in ways that would make some of the more contemporary strong-man leaders green (heh) with envy.

This writer still remembers the day it happened. On May Day, 1993, barely a week after his political rival Lalith Athulathmudali was killed, news broke that the all-powerful President Premadasa had been killed in a suicide attack carried out by the LTTE while participating in the UNP’s labour day rally in Colombo. It was as if the entire nation had shut down. Rupavahini played its iconic mournful tune reserved for periods of mourning all day long. People were in shock, barely able to make sense of what they had heard. (Although, there were unconfirmed reports of firecrackers being lit in some corners of the island). Conspiracy theories abound that Premadasa had known of the attack, having mysteriously waved his white handkerchief seconds before the bomb went off.

But there was no question as to the identity of the culprits. Though they denied responsibility at the time, there was no doubt in anyone’s mind that the separatist Tamil Tigers had been behind the attack.

Reported the New York Times the next day: “Today’s annual May Day parade, organised by the governing party, was shown on Sri Lankan television. From television pictures it appeared to be a lighthearted affair, with Mr. Premadasa greeting people here and there in the crowd.

The police said the bomb exploded seconds after bodyguards stopped a man on a bicycle as he rode toward the President. Television pictures after the blast showed bodies scattered on the pavement, along with bits of clothing, broken signboards, shards of glass and the shoes of people who had fled.”

A statement issued by Athulathmudali’s successor in the Democratic Front, the equally dynamic and influential Gamini Dissanayake, said: “This is a culmination of a process of violence which has accumulated during the last four years. The fact that very valuable men were victims of that violence will perhaps be the epitaph of this regime.”

Whatever people’s feelings may have been about Premadasa, he was their president, and he was a popular man who had done much to help the poor and destitute of this country salvage some dignity. Not unlike Vijaya Kumaratunga’s, his funeral was attended by large crowds.

Premada’s life was cut short, and he was unable to run for a second term. There is no telling how history would’ve changed had this come to pass. All we can do is speculate.

There were unconfirmed reports that when it entered into an agreement with the SLFP to form the UPFA coalition, the Janatha Vimukthi Peramuna, now reformed and eager to shed its violent and communal past, had recommended the country’s illustrious Foreign Minister Lakshman Kadirgamar as the next Prime Minister of Sri Lanka.

Of course, the cold war between heir-apparent Anura Bandaranaike and everybody’s favourite Mahinda Rajapaksa meant that this was never going to be a reality. And the fact that Kadirgamar was a Tamil Christian probably would’ve gotten in the way of things, it’s safe to say. However, the fact remains that he was deeply respected by the Sinhalese for being a vocal opponent of the LTTE and for defending Sri Lanka’s honour in many an international fora. Kadirgamar was instrumental in getting the LTTE listed as a terrorist organisation, earning him the wrath of the militant outfit.

A statue of Lakshman Kadirgamar that was unveiled by Former President Mahinda Rajapaksa in 2013. Image courtesy US Embassy, Sri Lanka

It came as no surprise then, when he was taken out allegedly by a sniper in Colombo as he was getting out of the swimming pool of his private residence, the authorities, as well as the international community, blamed the LTTE. The Tigers themselves, however, denied responsibility.

Kadirgamar, however, was very much aware of the threat. Speaking to The Hindu on July 29, 2005, he said “They (LTTE) can get me anytime. I get very serious reports things are hotting up”.

Things did hot up in the end for the LTTE, as Kadirgamar’s assassination was seen as a clear violation of the ongoing Ceasefire Agreement.

Though his life came to an early end, the work done by Kadirgamar to turn global opinion against the Tigers persisted, and it’s no exaggeration to say that it played an undeniably crucial role in the final outcome.

As said above, there are no clear-cut ways to define what is important and isn’t when it comes to political assassinations, as each and every life lost is significant in its own way. But there can be no doubt that some lives have cost more dearly than others. Let us know in the comments what else you think we should’ve included.